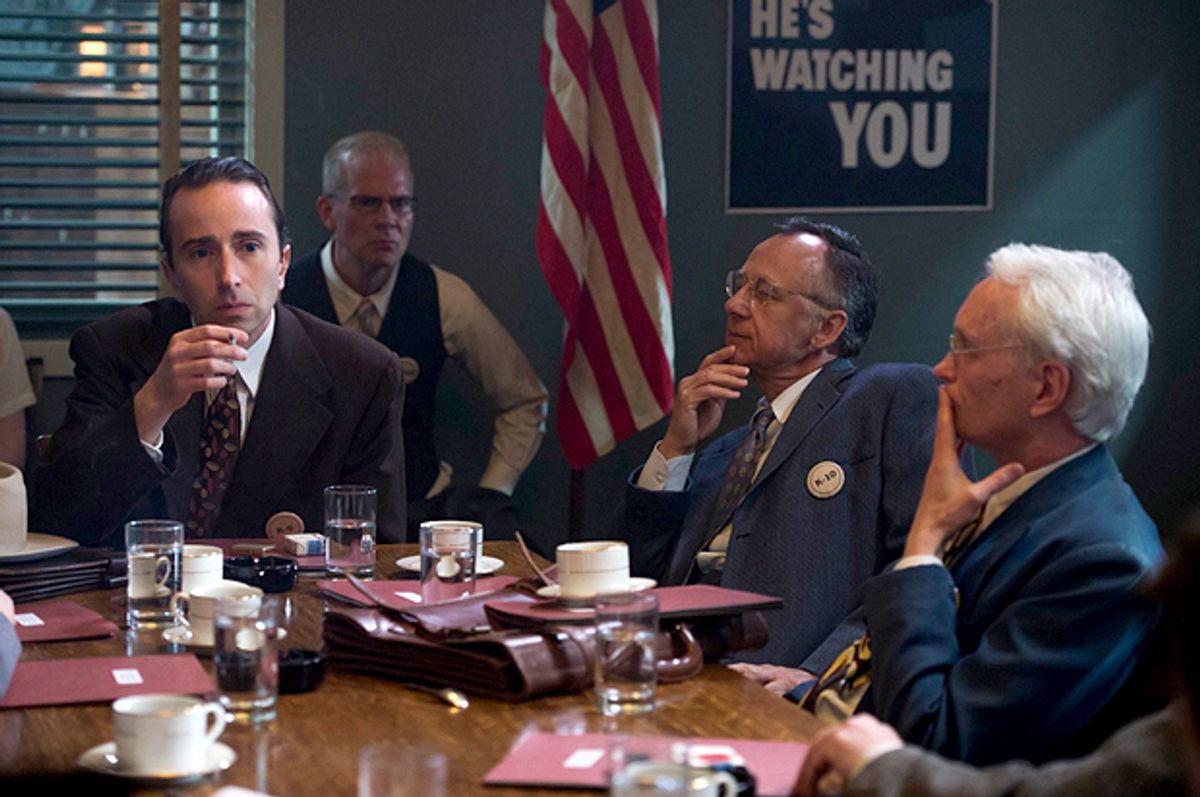 In last night’s episode of “Manhattan,” “Fatherland,” nuclear scientist Frank Winter (John Benjamin Hickey) wakes up in an internment camp. Though he does not know it, he is in Crystal City, Texas, home of one of the most notorious detention camps in American history—at least, pre-Guantanamo Bay. He’s been imprisoned on suspicion of being a spy; there’s a security leak in Los Alamos, home of the Manhattan Project. It is 1944, and a select group of people in the world know that the American military is creating a world-ending weapon. Winter is one of them—and moreover, as the first season revealed, he is one that is more successful than most in creating that weapon. But he’s haunted by visions of apocalypse and increasingly distrustful of his government; at the end of the first season, he flees Los Alamos, only to be caught and imprisoned. He isn’t the spy, of course—the audience knows exactly who is—but even when he proves it, by the end of “Fatherland,” he can’t get out of prison. Winter might be the most valuable mind in the military research facility of Los Alamos, but the government, in paranoia and suspicion, refuses to have him there any longer. He’s not a spy, but he still knows too much.

Winter is just one nuclear physicist of many in “Manhattan,” and like most of our lead characters, he is a fictional construct. But the world of Los Alamos isn’t, and neither are legendary physicists like Robert Oppenheimer and Niels Bohr, who are both secondary characters in the first season. At its simplest, “Manhattan” is a period drama about this circumscribed group of people and an era of extreme anxiety; war with Germany and Japan is all-consuming, and the Americans might not be winning. The mostly male scientists are forced to keep secrets from those closest to them, and it eats them alive. The mostly unemployed wives sit at home and fret over limited rations, bad weather, and the vast stretches of the unknown. Soldiers stationed at Los Alamos get drunk at dance parties that host both members of the indigenous tribe and Spanish-speaking Mexicans. It’s an era and an atmosphere, conveyed through scene-setting. At its slightly more complex, “Manhattan” is a show that looks at history with a modern understanding of the complexities of identity. Chinese-American scientist Sidney Liao (Eddie Shin) is discriminated against for being Asian, distrusted by the military, and then is executed for treason. Housewife Abby (Rachel Brosnahan) finds solace in a relationship with another army wife, Elodie (Carole Weyers). Helen Prins (Katja Herbers) is the only female scientist in a team of men, and struggles to be seen as something more than a strident anomaly. As I discussed with executive producer Thomas Schlamme—who previously worked on “The West Wing”—“Manhattan” is deeply concerned with restoring context to history.

The result is “The West Wing” without all the circular Aaron Sorkin dialogue, mixed with “Masters Of Sex,” but with far more compelling stakes (the creator of the show, Sam Shaw, used to be a writer on the Showtime show). And all this alone would make it well with your time, especially if you’re fond of World War II history.

But last night’s episode—in which Frank Winter grapples with internment, in the form of a very suspicious fellow inmate (Justin Kirk)—offers a window into what is another of “Manhattan”’s subtle strengths: that of a show that engages with total war as not just mass destruction but also a narrative. While war makes for the simplest story, that of “us” versus “them,” none of the characters of “Manhattan” neatly fit into either category, despite working for one team or another. As is revealed in “Fatherland,” Frank Winter’s mother is German—and grew to despise her American husband and son. Frank is American, and works for the Americans, but is also imprisoned by the Americans. Once you start drawing lines trying to determine who is really “us” and who is really “them,” it becomes increasingly difficult to make any sense of the landscape—as the paranoid gatekeepers of “Manhattan” rapidly discover. It’s 1944, and America had yet to really experience the us/them paranoia of the Cold War; this is just the tip of what will be a massive, world-shaking iceberg.

It’s apparently too optimistic to hope that we might have learned something since then. While I was watching “Fatherland,” something was nagging me about the familiar shape of the story, and I realized that Frank Winter’s bomb was reminding me of the homemade clock of a 14-year-old boy—a clock that inspired so much paranoia, it got him arrested. Though of course, the whole point is that the clock wasn’t a bomb, in the case of Ahmed Mohamed, there is one thing both stories have in common—that of losing incredible talent, due to arbitrary reckonings of “us” and “them.” Mohamed’s family announced yesterday that they were all moving to Doha, Qatar, where the government had offered Ahmed fully funded education through college. In raising the specter of “us”/”them”—in treating a 14-year-old boy like a terrorist because of his name and skin color—an American town has actually reinforced the “us”/”them,” because Mohamed is now leaving our country entirely to live and pay taxes in the vilified Middle East. We lost an American, in our attempt to be more American.

“Fatherland” is a psychological, almost dream-like exploration of self and allegiance, one that unfolds like a dramatic one-man play with Hickey in the lead. As if to underscore the shifting lines of identity, he introduces himself with a fake name, at first—the name of a colleague. His fellow inmate, over the course of several hours, plays at least three different identities—Nazi, American agent, communist—trying to get Frank to respond to any of them. In the midst of starvation and mind games, Frank tries to maintain some shred of his own “real” self. And in the end, he discovers his allegiance doesn’t even matter to his captors—“Fatherland” reveals that the American military is using the specter of Nazi invasion and German superweapons to keep the team at Los Alamos working faster and faster. Because it’s never just “us” and ”them”—it’s “us,” “them,” and those that profit on the difference between the two.