Paul Ryan plays the potty trainer: He says he won't take the GOP insanity caucus's sh*t -- but will they listen?

The far-right Speaker candidate wants the far, far right to know who's boss. But this crowd isn't one to yield 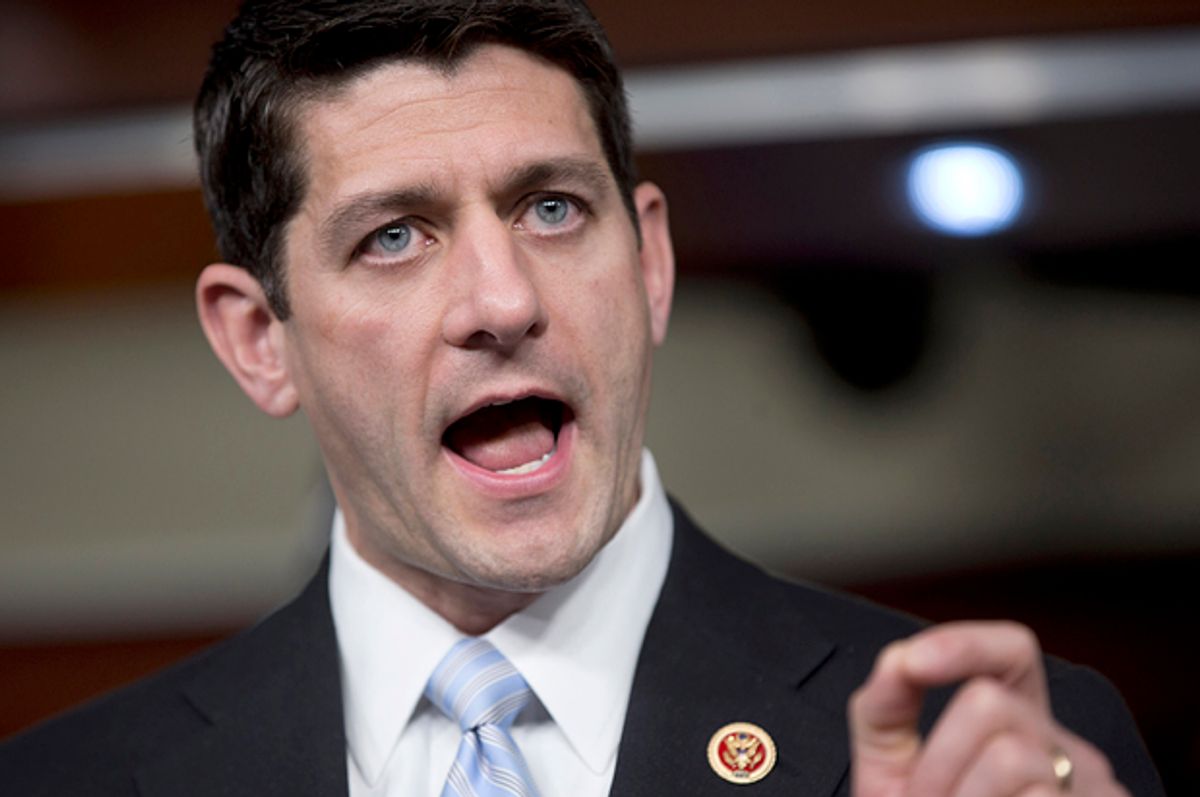 On Tuesday afternoon, the Senate Democratic leader told reporters that he would like to see Rep. Paul Ryan become the Speaker of the House of Representatives. Reid added, “I’m a Paul Ryan fan,” thus immediately rendering the Wisconsin congressman unpalatable to the hard-right members of his caucus and causing microwaves all over Washington, D.C. to explode as political watchers fired up bags of Orville Redenbacher.

As Congress trickled back into the capital on Tuesday after a ten-day Columbus Day recess, all eyes were on Ryan. The congressman had promised to spend his vacation thinking hard about whether or not he would run to take over the speaker’s seat from John Boehner, who had thrown everyone into an uproar with his announcement last month that he would retire from Congress on October 30. This was followed by majority leader Kevin McCarthy, Boehner’s presumed successor, flaming out over his infelicitous remarks regarding the purpose of the Benghazi Select Committee. By the time the House’s members fled back to their districts almost two weeks ago, the Republican party looked more chaotic than the mosh pit at a Gwar concert.

Paul Ryan was said to be the only person who could unite this fractious caucus -- and indeed, he now says he'll run for speaker if every caucus in the GOP conference is willing to unite behind him, and if the job itself is restructured to enhance his leverage over restive hard-liners.

On paper, this shouldn't be tough. Ryan offers something for everyone in the GOP. He's a hard-right ideologue who, were he to get his way on the budget, would screw over the poor and elderly so completely, the writers of National Review would demand the pope canonize him. But he has that pleasant “Midwestern nice” air that moderates think would distract the public from noticing he’s a sociopath until well after he has sunk a shiv into the back of the welfare state and killed it off once and for all.

The public was mostly not fooled by Ryan when he was Mitt Romney’s vice presidential candidate in 2012, particularly after Joe Biden all but pantsed him on live TV during their one debate. But the nice thing about running as a replacement Speaker in the middle of a term is that you don’t have to appeal to the public. Now he gets a chance to advance his far-right agenda without having to ask the voters first.

Of course all the reasons why Ryan is a good choice for the GOP are also the reasons why he is a bad one. Let’s start with the hard-right Freedom Caucus. This is a group that just finally, after almost five years, got rid of the affable Boehner, a party hack with the proper conservative ideology but little stomach (in their eyes) to fight to ram legislation reflecting that ideology through not just the House, but the Senate and the Oval Office as well.

The Freedom Caucus members are the types who still think Mitt Romney and John McCain lost the last two presidential campaigns because they were not conservative enough. Why on earth would they be satisfied with another modest, self-effacing type who has made it clear he feels more at home being a wonky policy nerd than a scrappy, bare-knuckled partisan who will fight for conservative priorities? A guy whom other Republicans – John Boehner in particular – have had to beg and beg and beg to consider taking the job?

Ryan knows this, so he's now essentially demanding, “Let me lead the caucus without fighting me or trying to undercut me,” which is a little like calmly and rationally explaining to Cujo why he shouldn’t bite anyone.

But the Freedom Caucus has its own list of demands in exchange for its support, including procedural reforms designed to give the next Speaker even less control over the House than Boehner has had, raising the question of whether Ryan's preconditions will ever be satisfied. He's given his colleagues until Friday to unite behind him.

Now, Paul Ryan is enough of a wonk to understand that no matter what, he will still have all the same barriers to passing a conservative agenda into law. Namely, he will still face the Senate Democrats and President Obama, who will be as immune to his pressure as they were to Boehner’s. There is nothing he can do about the Freedom Caucus’s inability to understand why the barriers to enacting their agenda are baked into the system and beyond the manipulations of any Speaker.

I had originally assumed Ryan would be a stopgap, a caretaker Speaker who just has to keep the lights on and occasionally dump the boiler to keep the Overlook from exploding. But he played his hand well, essentially telling his caucus that they need him more than he needs them. Still, it's hard to see the Freedom Caucus giving into his major demand of relinquishing their power to depose him if they are unhappy with his leadership. They are likely not going to agree to his demands without some assurances that he'll pursue a far-right agenda. And what happens if he agrees but then can't deliver?

At best, Ryan may just be smoothing over the fractures in the GOP caucus going into an election year. We'll know by Friday if the most troublesome House members will let him do even that.