"This injustice has taken genocidal proportions": Why Cornel West and Carl Dix are rising up against police brutality 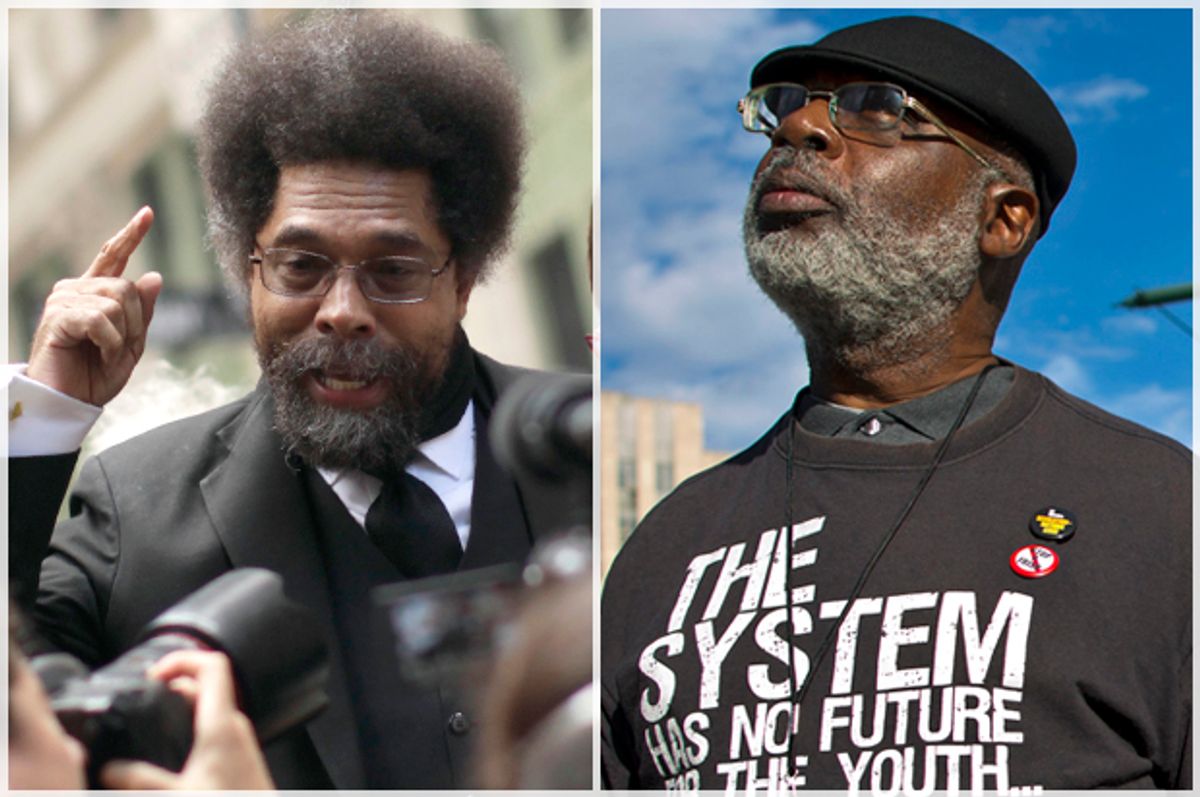 Rise Up October, a movement straddling campaigns like Black Lives Matter, has one serious message: Police killings -- and terror they inspire -- have to end.

With a sharp focus on mass resistance – and with plans of three days of mobilization between October 22 and 24 – this broad-based movement does not aspire to go beyond this statement. The idea is to keep the flame of mass resistance burning and to sustain the momentum of a somewhat imperiled national movement that already exists to counter police brutality.

Yet, how is Rise Up October different from other protest movements? Carl Dix is the co-founder of Rise Up October and a veteran communist and revolutionary. He speaks to Salon about the initiative.

Tell us a little bit about yourself.

I have been a revolutionary since the 1960s. I grew up as the Civil Rights movement was developing, as well as the anti-war movement.

In 1968, I was drafted into the army, and in late 1969, I got orders to go to Vietnam. I had to decide whether I, as a young black man, should go and be part of this war. I found out that this was not a war that I should be a part of, that it was trying to drown the liberation of an oppressed people in blood. So, I refused to go to Vietnam; I became part of the largest mass refusal of GIs to go – The Fort Lewis 6. For that, I spent two years the in Fort Leavenworth military penitentiary.

And I was a founding member of the Revolutionary Communist Party in 1975, and have been a member of that party ever since. In relation to that, I co-founded the October 22nd Coalition to Stop Police Brutality in 1996, and this year is going to be the 20th annual national day of protest on October 22, which is going to be part of Rise Up October. Cornel West and I co-founded the Stop Mass Incarceration Network. We co-issued in the spring the call for Rise Up October.

Tell me about your partnership with Cornel West.

I am a revolutionary communist and he’s a revolutionary Christian. He calls himself a free, Jesus-loving black man. So, we come from different perspectives, but at the same time, we look into the world and we see many injustices.

I’ve known Cornel for about two decades. He worked with me on the first national day of protest to stop police brutality in 1996, and that’s when I met him. We found that we had considerable overlap, as he puts it, about our concerns for the injustices of what happens to black, brown people, and others at the hands of law enforcement.

More recently, we have seen that this injustice has taken genocidal proportions. It was urgent that a movement of resistance be forged. On that basis, we began a campaign to stop stop-and-frisk in New York City, and that is now what is driving Rise Up October.

What is the general ideology behind Rise Up October?

As opposed to an ideology, Rise Up October had an ethos, or a certain sense of the horrific nature of the problems we are up against – the fact that is it intolerable, illegitimate, and unacceptable that police get away with murder again and again. We are trying to forge a resistance that has very broad arms, that can encompass people coming from different ideological perspectives, but keeps the focus on resistance. All of us usually wouldn’t be in the same room, but it is [injustice and the need to resist] this that has brought us all together.

We all agree that it is going to take mass resistance from the grassroots. It isn’t going to be the case that the people who preside over it are going to take care of it. People used to say, “Look, you should get some black politicians into office.” We got mayors, Congress people, police chiefs, even a president, and still problems kept happening. My own opinion – and not that of Rise Up October – is that it’s going to take revolution, not conversation with the authorities to end problems. Then, people can go in different directions of where things need to go, but springing off of these resistance efforts.

How is Rise Up October different from the protest movements that were organized last year?

Cornel and I issued the call for Rise Up October because 1) we were inspired by the protests last year and 2) we were concerned by the response of the authorities to try to suppress the new rising of protests. We saw that people were potentially set back in the face of mass arrests, the heavy charges and threats of even heavier charges, the attempts to dehumanize the movement with talk that Black Lives Matter was a hate group responsible of the killing of police officers.

We feared that the movement could be forced out of the streets and when that happens we get taken to the cleaners. We felt there was a need to call for people to go back into the streets with even greater determination and in great numbers. We are really trying to keep this movement from getting suppressed.

Each of the three days of action has a different theme. Can you tell us what they are and their significance?

We’ll begin on Thursday, October 22nd, which is the national day of protest to stop police brutality, and the themes: No More Stolen Lives, Say their Names. Forty or more families of people killed by police are going to gather in Times Square, and read the names of people killed by police, and hear from the families. In the afternoon, there will be a protest march/rally in Brooklyn.

On Friday, the 23rd, our theme is Shut Down Rikers. There will be a non-violent direct action on the road in Queens leading to Rikers Island. Eighty-five percent of the prisoners in Rikers Island are only there because they could not meet the bail required of them. It literally comes on into being a debtors’ prison, but one where torture and murder is carried out against the inmates.

On Saturday, we will gather in Washington Square Park in Manhattan and march to Bryant Park. The message will be: Stop Police Terror: Which Side Are You On?

We want to let the world know that there is a sizable section of people in this country, who refuse to accept the horror of police getting away with murder. The significance of this is to say that people, not the media or police, are seeing this happen. Video after video, you see Eric Garner choked to death, Tamir Rice gunned down by police, Gilbert Flores being shot with his hands up, Sandra Bland brutalized and ending up dead in prison. People are not accepting this, and we want to put it before all of society. Don’t feel like you can be neutral on this: which side are you on?