The Donald will be the end of Jeb: There's no coming back from his latest assault on W's legacy

Trump has gone where even Democrats won't, and it could finally spell the end of Bush's bumbling presidential bid 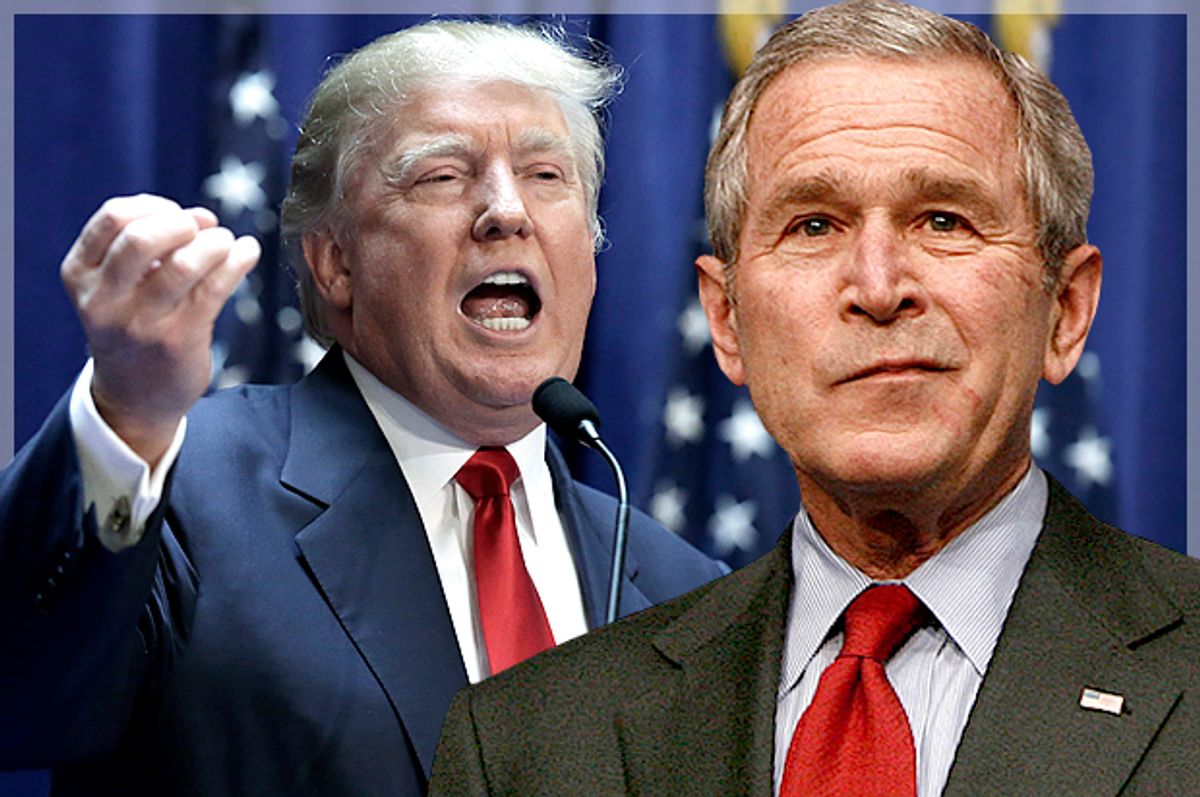 As the saying goes, even a broken clock is right twice a day.

The phrase seems applicable right now to Donald Trump, who has lately made it his business to shout, at increasing volume, as many empty slogans, detail-free policy plans and grossly racist and xenophobic inaccuracies as he can think up. Trump gets an awful lot of things wrong, an awful lot of the time. But right now, we’re in one of those rare moments when Donald Trump is right—and even more astoundingly, he’s the only one. As the billionaire calls BS on mythologizing around 9/11 and how George W. Bush “kept us safe”—a myth Jeb Bush has turned into a mantra on the campaign trail—Trump deserves credit for actually nailing it this time, and for saying what neither Republicans nor Democrats have had the courage to publicly utter in more than a decade.

The kerfuffle started last week with a Bloomberg TV interview in which Trump stated about George W. Bush, “Blame him, or don’t blame him, but he was president.” He continued, “The World Trade Center came down during his reign.”

Jeb Bush responded via Twitter, calling Trump “pathetic” and insisting, “We were attacked & my brother kept us safe.”

“No,” Trump returned, “you're pathetic for saying nothing happened during your brother's term when the World Trade Center was attacked and came down."

And here, Trump makes perhaps the most honest, sanest, and above all, unassailably correct statement he’s uttered during this campaign season thus far. Though endless outlets criticized the billionaire for blaming Bush for the attacks (and I’ll defer to Peter Beinart’s excellent Atlantic piece on why that’s also true), the question of blame is essentially irrelevant. What’s unquestionably true is that Bush did not keep us safe, a basic reality revealed by the fact of 9/11. It’s not rocket science. And yet, for 13 years now, even Bush’s foes haven’t said as much.

In the days since that appearance, Trump has used his Twitter to double down on his remarks, highlighting issues that seem likely to damage Jeb Bush’s campaign and to make it difficult to continue his defense of his brother. These tweets included an article pointing out that Jeb Bush, in his 2013 bookImmigration Wars, had written that 9/11 could partly be attributed to the U.S.’ “leaky immigration” policy at the time; a link to a New York Times article pointing out that more than a month ahead of the attacks, during an intelligence briefing, Bush was provided with a classified document titled “Bin Laden Determined to Strike in U.S”; a reminder that none other than Jeb Bush was governor of Florida when all 12 of the highjackers acquired identification through legal means in the state; and a Buzzfeed News piece excerpting a 2000 letter by Trump warning of the potential for a major terrorist attack on U.S. soil, in which the billionaire makes specific reference to Osama bin Laden.

The implication, of course, is that Bush, despite endless intelligence and concrete warnings from staff, still could not foresee what Trump saw coming. Which makes Bush W.’s leadership and Jeb Bush’s judgment suspect.

While naysayers have rushed to defend both Jeb Bush and the ex-president against Trump, two unlikely voices have expressed support. Rand Paul, who has previously called Trump a “clown” and a potential “disaster” for the GOP, found some common ground on the question of Bush’s actions—or failure to act—ahead of 9/11. In a CNN interview, Paul, after making clear that the terrorists were “primarily responsible” for 9/11 stated: “[T]he biggest failure of the Bush administration, but primarily the FBI, was that we caught the '20th hijacker' a month in advance…The FBI agent who caught him wrote 70 letters to FBI HQ saying we should look at his computer – get a warrant. And they never did. That was a huge failure, and I never quite understood why no one was fired...We also had this report out of Arizona of people trying to fly planes but not learning how to land them....”

And Chris Matthews, who would never be mistaken for a Trump supporter, praised Trump for “awaken[ing] us all to the fact that Jeb said something that just isn’t true,” which “the Democrats never had the stones to go out” and do. “What strikes me about the campaign so far is that it took a political newcomer, Donald Trump, to say something we already knew but nobody had said before. That President George W. Bush did not keep us safe in the eight years he was president of the United States.”

Matthews also pointed out the hypocrisy of absolving Bush of any responsibility for 9/11, yet laying the blame for Benghazi squarely on the shoulders of Hillary Clinton. “[T]he Bushes and their partisans can charge Hillary Clinton for what happened in a remote building in war-torn North Africa, miles – 400 miles – from the capital of that country.”

As NBC correspondent Katie Tur points out, 17 of Jeb Bush’s 21 foreign policy advisors were also advisors to his brother, George. This, coupled with Bush’s inability to rely on the narrative of a no-fault 9/11—or Bush as America’s protector for eight years—makes it difficult to see how his campaign can make necessary gains using the pat lines it's come to rely on. (If an interview today in which Jeb Bush essentially faults Bill Clinton for 9/11 is any indication, the flailing has already begun.)

Meanwhile, Donald Trump continues to push out his message of Bush family incompetence. Who knows if it’ll help him win the primary. But for now—during what will undoubtedly be a fleeting moment—it’s helped him win the begrudging respect of people who agree with him on absolutely nothing else.