"I thought I was going to die, it was horrible": The growing far-right is attacking refugees throughout Europe

Refugees are constantly being attacked by the far-right, as Europe sees terrifying echoes of its fascist past. 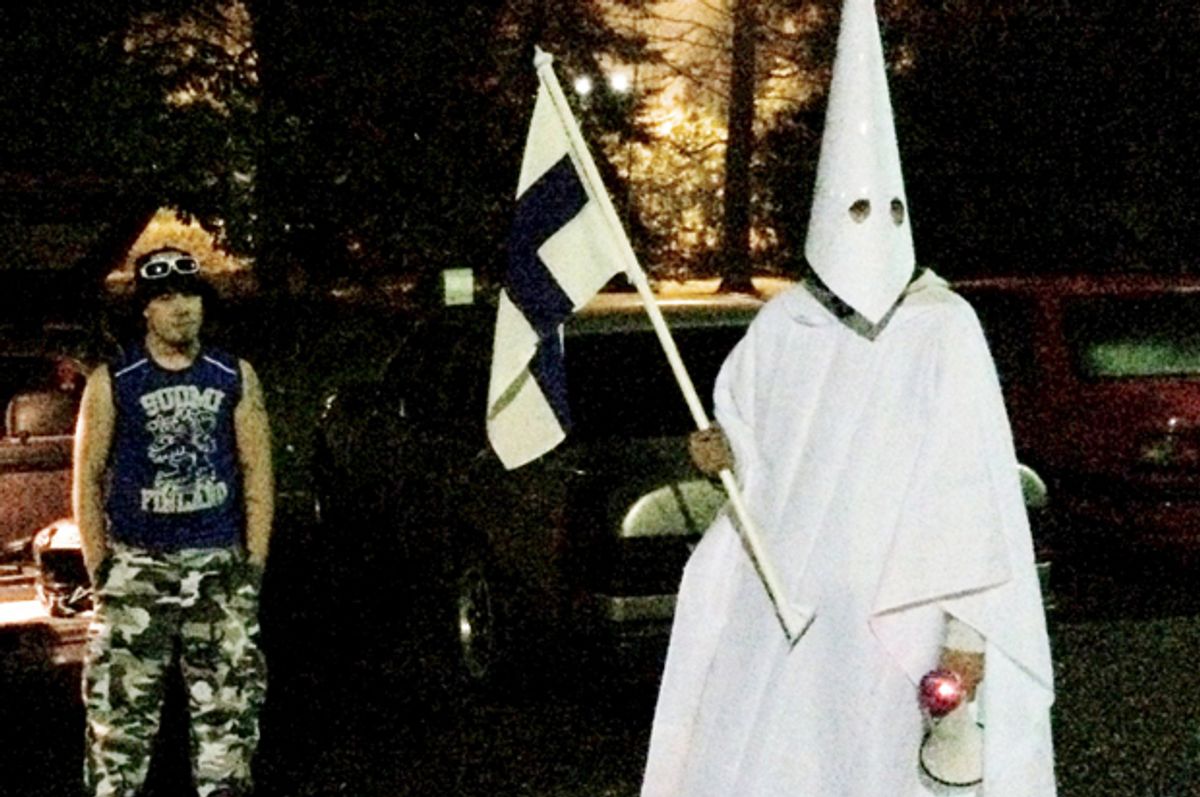 "I thought I was going to die, it was horrible," a terrified Somali refugee proclaimed. He had just lived through an arson attack on a refugee center in Sweden.

There have been 15 arson attacks on refugee shelters in Sweden so far in 2015 -- more than one per month. In one attack, in August, a Christian cross was set on fire outside of a refugee center, recalling the KKK and white supremacist terrorism in the U.S.

Sweden, which has a reputation of being an exceptionally progressive and egalitarian country, and which has pledged to take a disproportionately large number of refugees, is by no means the only European country to be hit with a string of such attacks.

Just weeks ago, a refugee center in neighboring Finland was firebombed. At the same time, elsewhere in the country, scores of racists attacked a bus full of refugees. One of the far-right assailants was dressed in a white robe with a pointed hat, another KKK symbol.

Further south, in the Netherlands less than two weeks ago, a refugee shelter was also attacked by 20 masked men.

Perhaps most worrying is the growth of violent far-right extremism in Germany. For months, Germany has seen a swelling wave of xenophobic violence. Dozens of refugee centers have been set on fire, and refugees themselves have been assaulted. Several days ago, pro-refugee German mayoral candidate Henriette Reker was stabbed in the neck by a far-right terrorist with a link to neo-Nazi groups.

These attacks come as the anti-Muslim Pegida (an acronym for "Patriotic Europeans Against the Islamization of the West") movement celebrates its one-year birthday. In these past 12 months, Pegida has organized a series of increasingly large protests, at which protesters chant against Muslims, refugees, and immigrants, whom they refer to as "invaders."

In a recent rally, a Pegida speaker warned that Germany is becoming a "Muslim garbage dump," and lamented that "the concentration camps are unfortunately out of action at the moment." Pegida claims to be anti-Nazi, but its movement has strikingly fascistic tendencies. In fact, Pegida's founder quit after a photo of him dressed like Hitler was leaked.

The world is witnessing the worst refugee crisis since World War II. The German government said it expects up to 1.5 million refugees to arrive in the country in 2015. In the past several months, as refugees -- most of whom are fleeing violent wars in the Middle East, Africa, and South Asia -- have flooded Europe in search of asylum, far-right parties and movements preaching anti-Muslim and anti-immigrant doctrines, like Pegida, have rapidly grown in popularity.

The Netherland's far-right Party for Freedom (PVV) has become the country's most popular political party. Anti-fascists are concerned. In an interview with Radio Netherlands Worldwide (RNW), the Dutch equivalent of NPR, prominent philosopher Rob Riemen warned about the dangers of the PVV's growth. The PVV is "fascist," Riemen warned. "I don't mean that as a term of abuse; it's an objective historical judgment. There are numerous parallels between fascism then and now. History is there to learn from and, if we don't, we will make the same mistakes."

Referencing Geert Wilders, the anti-immigrant and anti-Muslim leader of the party who frequently rails against "multiculturalism," Riemen explains that what "you can clearly see with Wilders is the cultivation of feelings of unease and fear in society. Societal unease is blamed on a single scapegoat: Muslims. He is also an authoritarian, charismatic leader who has little time for democracy."

The PVV, like other anti-immigrant and anti-Muslim groups in Europe, Riemen explains, "is more a movement than a party." Almost every European country has its PVV equivalent. Greece has Golden Dawn; Hungary has Jobbik; Denmark has the Danish People's Party; France has the National Front; Britain has the British National Party and the U.K. Independence Party; Germany has the National Democratic Party and Pegida. Wilders, like many of the leaders of the these other far-right movement, wants to close his country's borders, and refuse to provide asylum for refugees.

The far-right is on the rise throughout Europe. Observers warn that the continent may be seeing the resurgence of fascism. This neo-fascism is not identical to its early 20th-century predecessor, but it is the same in spirit. And the new targets of the neo-fascist's hatred, the scapegoats whom they blame for their countries' ills, are refugees and Muslims.