The ladies who planted bombs: Inside the Oscar-bait drama of "Suffragette," an urgent lesson in activist history struggles to escape

An intriguing new movie revisits the half-forgotten radical legacy of the suffragist era, and why it still matters 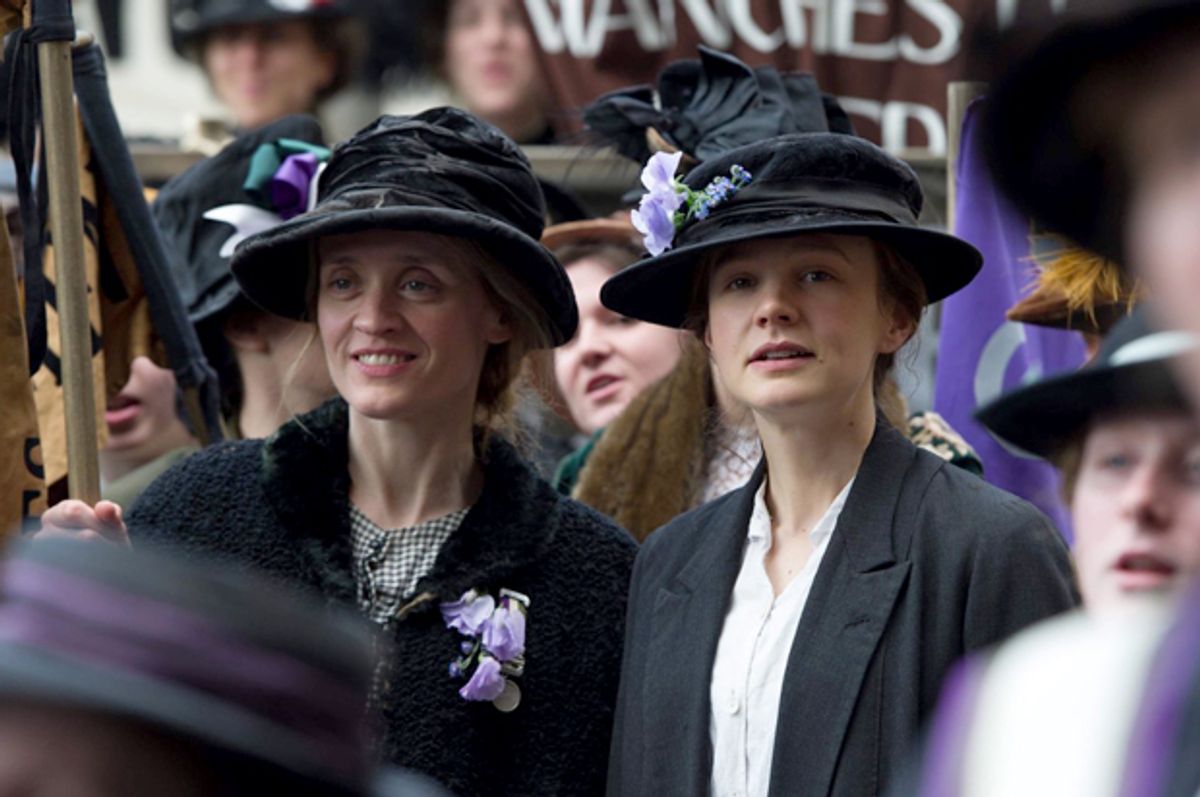 It’s ironic or telling or all too illustrative of the social dilemma depicted in director Sarah Gavron’s much-anticipated film “Suffragette” that the direct-action tactics of early 20th-century British feminism had such a far-ranging effect on other movements dominated by men. Perhaps the most startling aspect of “Suffragette,” which for better or worse is a standard-issue historical drama, well constructed but not especially capacious or original, is its depiction of how far female activists were willing to go in order to prove that they could stand alongside men. If nothing else, Gavron and screenwriter Abi Morgan have rescued suffragist reality from antique newsreel footage of proper ladies wearing prim little hats and carrying signboards.

If the leading suffragettes of turn-of-the-century London – that word began as a term of ridicule, but many British feminists embraced it – were often upper-class radicals like the controversial Emmeline Pankhurst (played here by Meryl Streep, basically in a cameo role), Morgan’s screenplay seeks to shift the focus to the movement’s working-class base. That’s a worthy goal, but in dramatic terms the results are mixed: Too much of “Suffragette” is a vaguely Dickensian fable about the struggles of Maud Watts (Carey Mulligan), a young laundry worker in the East End who joins the cause only to be ostracized by her neighbors and thrown into the street by her cowardly husband (Ben Whishaw).

Mulligan is being talked up for an Oscar nomination here, and I always find her a watchable performer. But Maud is a Noble Example of Something more than a character, and what’s far more interesting in “Suffragette” is the vivid depiction of how vigorously these women fought against an openly hostile British establishment. Not only were women barred from voting, they had extremely limited property rights (always secondary to those of fathers, husbands or brothers) and essentially no parental rights in cases of divorce or marital discord. Yet between about 1905 and 1913, the suffragists moved from polite street demonstrations and public petitions to lockdown protests, prison hunger strikes (which provoked brutal force-feedings) and campaigns of property destruction.

Some historians have described suffragette tactics as “violent” and counterproductive, but as usual with such things, it depends what you think violence is, and what counts as being productive. As Morgan’s script makes clear, the movement began to split apart when Pankhurst and her most militant activists turned to blowing up mailboxes by the hundreds, cutting telegraph and telephone lines and even firebombing uninhabited buildings. “Suffragette” depicts one of the most famous incidents, the destruction of an unfinished weekend cottage that belonged to David Lloyd George, a leading Liberal Party politician and future prime minister. (In some ways it was a curious choice: Lloyd George was somewhat sympathetic to the suffragist cause, but could not convince then-Prime Minister H.H. Asquith to sign on.)

Honestly, if Gavron and Morgan were not slightly too concerned with making sure that Maud and her laundress comrade Violet (Anne-Marie Duff) and crusading pharmacist Edith Ellyn (Helena Bonham Carter) and the other suffragettes don’t alienate audience sympathies, the story could have gone much further. As a matter of historical record, suffragist protesters smashed shop windows by the thousands, often selecting symbolic targets: High-end dress shops that catered to wealthy women; offices and workshops where women were mistreated or sexually harassed (the term may not have existed, but the practice surely did) or paid half as much as men for the same work.

Enclaves of male privilege were vandalized, like golf courses, cricket grounds and racetracks, and so were zones associated with upper-crust femininity, like the picturesque Tea House at Kew Gardens, which was burned to cinders. Activists damaged exhibits in the British Museum, and took an axe to a portrait of the Duke of Wellington in the National Gallery. In June of 1914, a presumed suffragette bomb went off next to the Coronation Chair in Westminster Abbey, where every English king or queen had been crowned for more than 600 years. That explosive was too small to do much damage (I almost want to say regrettably so), but it represented a shocking if symbolic assault against the most revered British traditions.

It’s one thing to show angry women fighting against conditions that look, to the contemporary viewer, like obvious injustice. But Gavron and Morgan were no doubt aware that you can’t make a movie pitched at American audience and the Oscar race that shows crazy feminist bombers attacking the Royal Family, who are probably more worshiped by the Yanks than the Brits at this point. But “Suffragette” does draw explicit connections between that seemingly remote age and more recent historical moments and movements. Not merely did the suffragists face police brutality and constantly shifting modes of legal persecution, they also galvanized an early version of the surveillance state. Their movement was infiltrated by spies, informants and provocateurs; Pankhurst and other leaders were tracked by police agents armed with some of the first portable cameras.

Some of this gets delivered, perhaps a bit too obviously, through the conflicted personage of a fictional Special Branch officer (or police intelligence agent) called Inspector Steed, played by the wonderful Irish actor Brendan Gleeson. Steed has made his bones by spying on the Fenian movement (i.e., the radicals among his own people) and has now been brought in to put down the uprising of ladies. In dramatic terms, Steed serves as a quasi-fatherly foil or nemesis for Mulligan’s Maud in a way that never seems fully satisfactory; as throughout this film, Gavron splits the difference between didactic history lesson and “relatable” storytelling without quite reaching either goal.

In fairness, there can be no doubt that the confrontational tactics of the suffragists served as an inspiration for the Irish republican movement and the Easter Rising of 1916, and that connection is too easily overlooked. It would be even more accurate to say that the early feminists borrowed their direct-action tactics from Russian and Eastern European anarchists (many of whom then lived in exile in London) and spread them all over the Western world – to Ireland, to India, to Latin America and colonial Africa, to the American labor movement in its glory years, to the Black Panthers and ACT UP and many others – without getting any of the credit. If you felt puzzled or unhappy or challenged or excited when you saw Occupy Wall Street or Black Lives Matter protesters chaining themselves in place, or refusing to back down from a confrontation even at risk of being called “angry” or “violent,” you were feeling the problematic influence of the suffragettes. Was everything they did wise and prudent? That’s quite a different question from whether they changed the world, and whether they could have done that by staying home and making jam and writing letters to the editor.