Trey Gowdy destroys his own hearing: The Benghazi committee chairman goes completely off the rails

The "serious investigation" into Benghazi turned into a loud, stupid argument over one of Hillary Clinton's friends 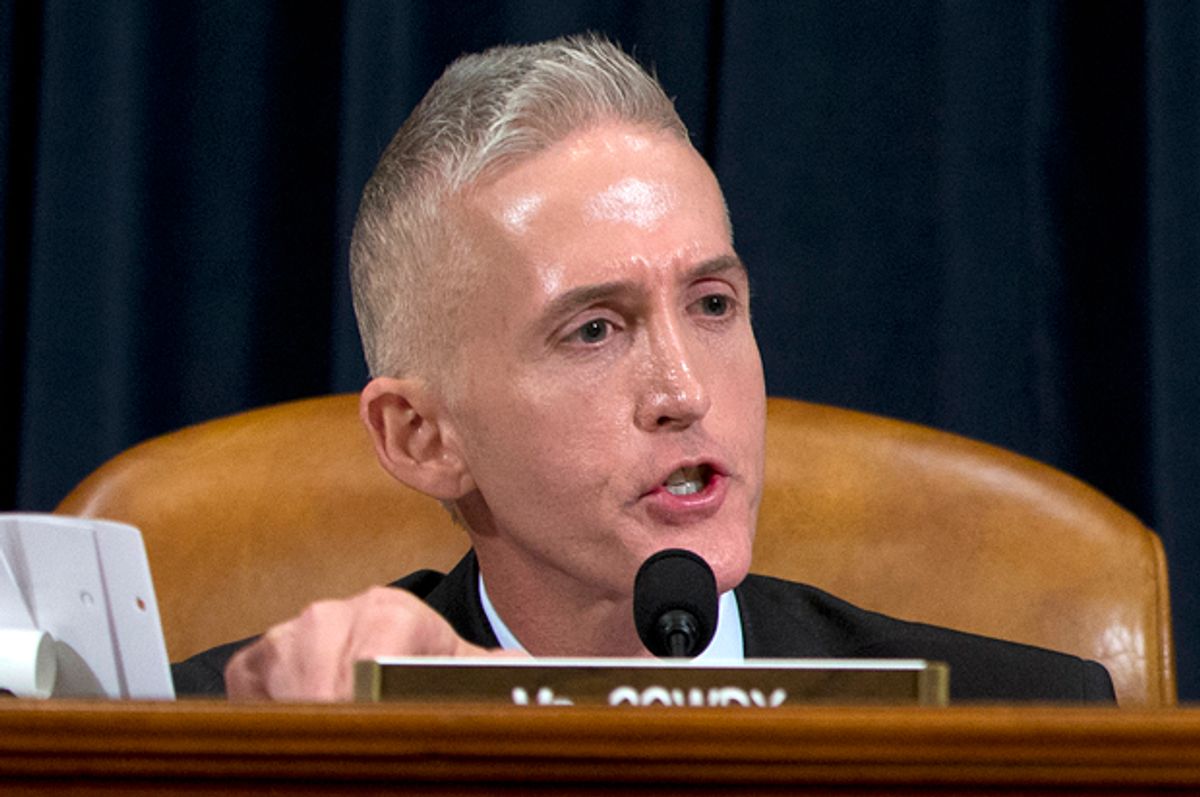 Heading into today’s Benghazi committee hearing, I was curious which Republican on the committee would be the one to go full derp and scuttle any remaining doubt as to the committee’s political motives and agenda. With Hillary Clinton in the witness chair, the 2016 election season in full swing, and Benghazi on the docket, it seemed inevitable that someone on the Republican side would let their passions and partisanship get the better of them and eagerly throw themselves down a rabbit hole. That did end up happening, and the culprit turned out to be the one Republican I was sure would not do it: Benghazi committee chairman Trey Gowdy.

Gowdy, more than anyone else, is sensitive to the allegations of partisanship surrounding his committee and claimed to be personally hurt by the attacks on its credibility. So it seemed like he would go to great lengths to keep the rest of the members in line, if for no other reason than to demonstrate in public that he is running, as he so often declares, a “serious investigation.”

But, alas, Gowdy went completely off the rails when his turn to interrogate Clinton rolled around. He started off his questioning by angrily responding to Rep. Adam Schiff (D-CA) and loudly denying that the Benghazi committee was a “prosecution” of Clinton or the Obama administration. “I’ve reached no conclusions,” he declared. Watch the video here to get a sense of how very agitated Gowdy was.

Here’s the thing: we know none of that is true. One of his first public statements as Benghazi committee chairman likened the investigation to a criminal trial. “If an administration is slow-walking document production,” he said, “I can’t end a trial simply because the defense won’t cooperate.” He tried to walk it back, but Gowdy made similar comparisons during House Oversight Committee hearings into Benghazi, promising the families of the victims that the “real jury … is the American people,” and they were “watching this trial unfold, and they will decide.”

And then Gowdy got into his actual questioning, which was devoted entirely to Hillary Clinton’s email correspondence with longtime Clinton friend Sidney Blumenthal, who had been sending Hillary unvetted “intelligence” reports from a source he knew in Libya. The questioning quickly devolved into a lengthy argument over the definition of “unsolicited” as Gowdy tried to pin Clinton on whether she asked Blumenthal to send him this information. It then spiraled further downward, as Gowdy began reading aloud some of the nasty things Blumenthal said in his private communications about President Obama and his national security staff.

You’re probably wondering what, if anything, this has to do with the Benghazi attacks. And Hillary Clinton pointed out as much to Gowdy, saying “I don’t know what this line of questioning does to help us get to the bottom of the deaths of four Americans.” Gowdy offered his rationale, such as it was: “It’s relevant because our ambassador was asked to read and respond to Sidney Blumenthal’s drivel. It was sent to him to read and react to, in some instances on the very same day he was asking for security. So I think it is eminently fair to ask why Sidney Blumenthal had unfettered access to you, Madame Secretary… and there’s not a single solitary email to or from you to or from Ambassador [Chris] Stevens.”

Okay… I’m not really sure what comparing Blumenthal and Clinton accomplishes, and we know that Stevens had non-email access to Clinton, so… what are we talking about here?

It was at that point that everything went completely off the rails. Ranking committee member Elijah Cummings broke in and demanded that the transcript of Blumenthal’s private testimony before the committee be released and called for a vote. Gowdy pushed back, arguing that Cummings only wanted selected transcripts released. This went on for several minutes as Cummings and Rep. Adam Schiff (D-CA) successfully goaded the Benghazi committee chairman into an angry, extended argument over Sidney Blumenthal and Hillary Clinton’s emails.

Just before the hearing adjourned for a break, Gowdy promised that this would only continue. “If you think you’ve heard about Sidney Blumenthal so far,” he said, “wait till the next round.” This all happened as part of Gowdy’s “serious” investigation into the deaths of four Americans at Benghazi.