We're deluged with ads for Viagra and Cialis -- but why are they all so straight? 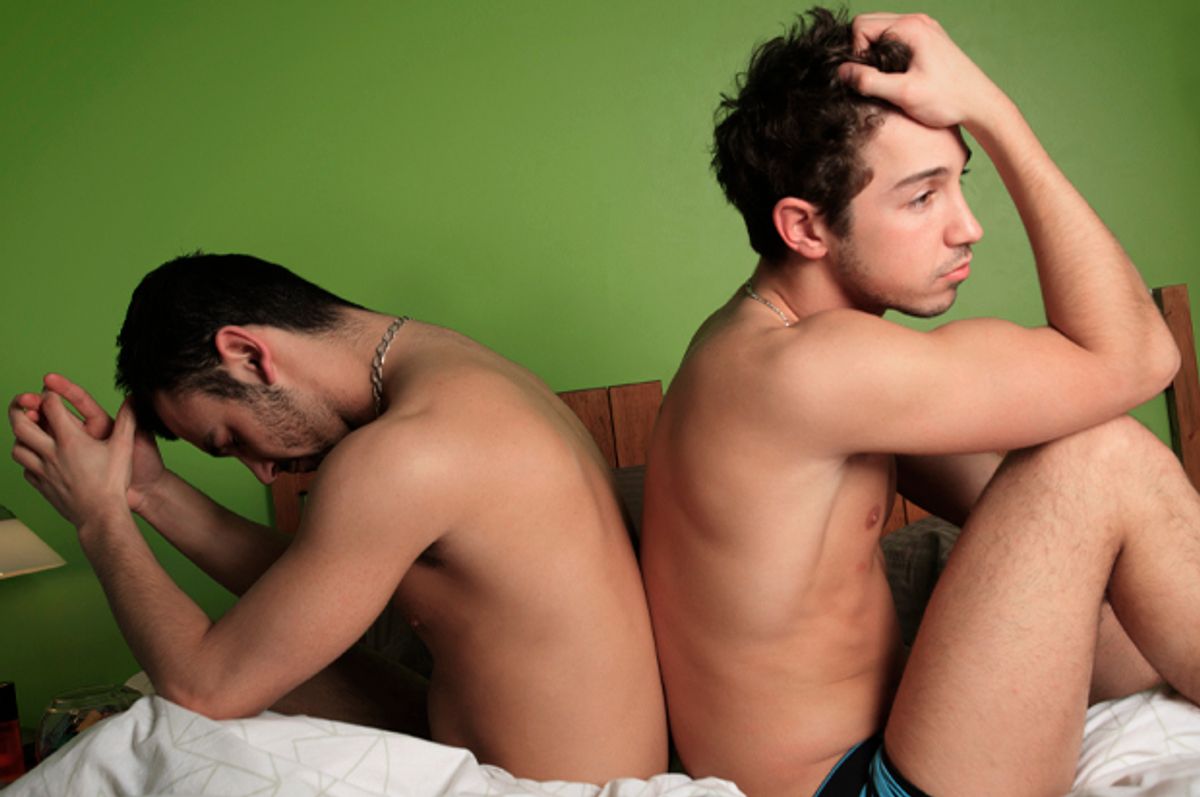 They say there's no crying in baseball. But from the looks of it, there's no gay erectile dysfunction in it either.

As the MLB season heads toward the World Series and fans are glued to their TVs, you may of late have noticed a deluge in ads aimed squarely at those middle-aged male viewers who, depending on their loyalties, may need a little help achieving either a celebratory or sorrow-drowning post-game roll in the hay. The mere acknowledgment — in the midst of America's other favorite pastime, no less — that, as a sexy woman purrs in a recent Viagra ad, "About half of men over forty have some degree of erectile dysfunction" is somewhat controversial. The perpetually offended One Million Moms has protested the timing of the spots, complaining, "When this type of commercial airs too early in the evening; family viewing time is ruined. Can you imagine what goes through the mind of a child, tween or teen when they see this ad? A parent never expects to have a discussion about erectile dysfunction while sitting at home enjoying family time." And Cardinals pitcher and "Follower of Jesus" Adam Wainwright tweeted earlier this month that "I shouldn't have to turn the channel every single comm break because of erectile disfunction ads. Millions of kids watching."

Yet as Mike Oz, writing for Yahoo Sports, points out, "One of the reasons professional baseball players can make as many money as they do is because of their club's massive TV deals and those deals don't happen without ads like these targeted at men who watch sports." Wait'll they find out that some men who watch sports do not conform to a heteronormative storyline!

Viagra has a whole series of ads featuring attractive, reclining ladies of a certain but still credibly bangable age cooing that "Curling up in bed with a favorite book is nice. But I think women would rather curl up with their favorite man," while Cialis spots feature playful middle-aged couples doing romantic, committed and monogamous relationship stuff. But if we have reached the point in our culture where we can acknowledge that gay men can eat canned soup, when will we consider that they can take boner pills?

Granted, it's a multiply taboo proposition. On the one hand, ads for ED drugs — even nice, married, heterosexually themed ads for ED drugs — are still considered inappropriate by many viewers. When you're talking about man on man action, you're probably not going to to please the folks who don't want to talk about this stuff even when it's for straight people. On the other side, while the UK's NHS acknowledges that ED "can affect any man, whether he is straight, gay, bisexual or transgender," the subject gets less acknowledgment and attention when it's about gay men. And that is changing only very slowly. In a 2010 feature for the Advocate on gay men and depression, doctor and writer Frank Spinellli noted, "One of the most striking complaints for gay men is a loss of sexual interest and pronounced erectile dysfunction." In 2012, the group Malecare launched a support initiative for gay men with ED. And a 2013 Belgian study of gay men over the age of 18 found that 45% admitted having "some problems getting an erection" sometimes and that a full 22% reported "mild to moderate ED."

The advertising industry is not at all uncomfortable using sex to sell its products — except of course when those products are actually designed to help you have sex. Then they seem to want to sell you bathtubs. But people of all orientations have sex and sometimes sex needs help. And gay men are not just cute dads who can be in ads for cookies. So how long before we see ad that acknowledges that, honestly? One that says, "Guys, we can help you get and keep an erection. And we can help your husband too."