Sure, Hillary trounced those clowns. But Benghazi true believers will fight on to save America -- or destroy it 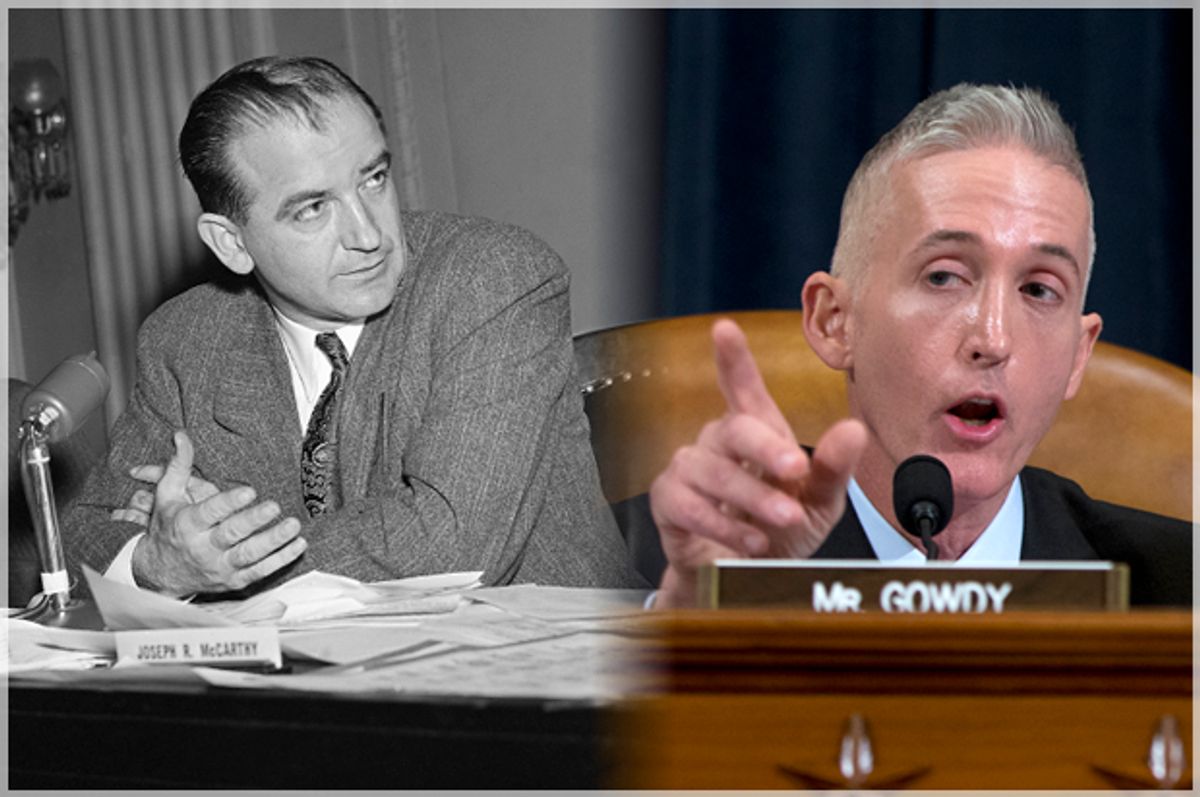 Benghazi is many things to many people, but it’s not about Benghazi. What I mean is that the meme or mantra or ideological touchstone known as “Benghazi” has virtually nothing to do with the Libyan port city of that name, or what happened there in September 2012. (Which – can we just say this? – barely registers in the historical scale of American foreign-policy tragedies, blunders and miscalculations.) For the Republican Party and its agonized cadre of true believers, Benghazi is like Yoko Ono, in the legendary National Lampoon spoof from the early ’70s: a concept by which we measure our pain.

The House Select Committee on Benghazi, chaired by Rep. Trey Gowdy, before which Hillary Clinton testified for nearly 11 hours on Thursday, is not really investigating the Benghazi incident, in which Libyan militants overran a United States diplomatic compound and four Americans were killed. Or to put it another way, Gowdy’s committee is seeking the truth about Benghazi in the same sense that Joe McCarthy investigated actual Communist spies in the U.S. government, or that Cotton Mather pursued actual witches in Salem Village. Those things are all connected, at least in the nightmare imagination of the Benghazi-verse: If one of the committee members had had the temerity to denounce Clinton as a Communist and a witch (as well as a traitor and murderess and lesbian and whatever the hell else), the “Republican base” would have risen from its collective sofa and roared in Old Milwaukee-spumed delight. It must have been hard to resist.

Nothing quite so revealing occurred, but it was revealing enough. To get back to history, Joe McCarthy genuinely feared the Reds and Cotton Mather feared the Devil; those guys may have been sociopaths, but they were not hypocrites. But like the Benghazi-hunters, both men were really after something else, something larger and more numinous and almost impossible to define. That fatal vagueness and sense of mission-creep was precisely what enabled Clinton to humiliate the Benghazi committee’s leading Republicans so thoroughly and repeatedly. She stuck to the putative subject matter, which largely does not interest them.

To Gowdy’s most zealous followers on that committee and among the public, the Benghazi incident is not important in itself, despite the ritual utterances of patriotism and the semi-divine status accorded any American who dies in defense of the empire: Dulce et decorum est, and all that. Benghazi is important because of where the faithful believe it will lead, and what they hope it will prove. Let me hasten to add that Democratic loyalists who cast the Benghazi hearings as a purely partisan exercise aimed at sabotaging Clinton’s presidential campaign only reveal their own limitations. Do not misjudge the scale, ambition and imagination at work in the Benghazi myth! Gowdy forcefully rejected such insinuations at the opening of Thursday’s proceedings, telling Clinton, “Not a single member of this committee signed up to investigate you or your email.”

Let’s give the chairman a point, or half a point, for irrelevantly dredging up the email scandal just in case we had forgotten about it, but in a sense he is correct: The true mission of the Benghazi committee goes far beyond a crude effort to destroy Hillary. It is much, much crazier than that. This was precisely what got Rep. Kevin McCarthy pitched into the Dumpster of history by the zealots of his own caucus. Sure, it was a media faux pas for the presumptive House Speaker to suggest that the Benghazi investigation he and John Boehner had authorized might have had a political agenda. Heaven forfend! But it was also, and far more importantly, too cynical a note for McCarthy to strike, at a moment when Republican true believers are fighting (as they see it) to save America’s soul.

No, I'm serious. Defeating Clinton and electing a Republican president, while clearly desirable, are collateral benefits the GOP fire-breathers hope will flow from Benghazi fervor. But the driving force behind the Gowdy hearings, and the hard right’s inability to let go of the Benghazi meme in the face of widespread mockery, lies in the profound belief that America, or at least “America,” is isolated, persecuted and under constant attack. Such a belief may be objectively insane, not to mention historically and politically ludicrous, but if you think it does not exist or is not genuine, you simply haven’t paid attention to the last 40 years – or, we might say, to the last 400. Joe McCarthy and Cotton Mather represent earlier manifestations of the same tendency, immortalized by historian Richard Hofstadter as “The Paranoid Style in American Politics.”

Hofstadter’s original essay was published in 1964, largely in response to the apocalyptic anti-Communism of Barry Goldwater’s presidential campaign, which marked the birth of the New Right. Paranoia has come a long way. For all his nutso John Birch leanings, Goldwater hewed to a reasonably coherent set of libertarian principles; set against today’s Republican radicals he looks like Voltaire. In the 21st century, we see the paranoid style honed to near-perfection among a significant cadre of Americans – predominantly male and Southern, and almost entirely white – who are ideologically and geographically exiled from their own society but who see themselves, paradoxically or otherwise, as its spiritual inheritors and most ardent defenders. They perceive themselves surrounded on all sides, at home as around the world, by murderous, treasonous and corrosive anti-Americanism and anti-capitalism (and in many cases also by anti-white racism and anti-Christian bigotry). They discern those forces at work in the Democratic Party and the big cities and multiculturalism and Planned Parenthood and “political correctness”; in the spread of mosques and taco trucks and ambiguous gender assignments; in Black Lives Matter and the still-baffling black president with the funny name, in the stagnant or declining real incomes of the last several decades and the fact that the mightiest military superpower in the history of the world has not conclusively won a war since 1945.

What Benghazi promised the paranoid faithful, or still promises – we can’t presume that one embarrassing hearing will bring an end to this charade – was a chance to turn the tide, to strip the scales from the eyes of their benighted and deluded fellow countrymen and reveal the scope of the hideous plot to destroy America. For the conspiratorial right-wing hive mind, Benghazi is the gate and the key to the gate, like H.P. Lovecraft’s ancient and indescribable entity Yog-Sothoth. But as with the One-in-All and All-in-One of the Lovecraftian universe, opening that gate leads only to madness and oblivion: What lies beyond is the “amorphous blight of nethermost confusion which blasphemes and bubbles at the center of all infinity,” otherwise known as the legislative agenda of the House Freedom Caucus.

It’s important to stress that many “conservatives” (an especially ridiculous term of art in the contemporary American context) still believe they can win in a fair fight, if they can only overcome the mind-control tactics of the feminazis, socialists and Muslim-coddlers in the “liberal media.” For the Republican Party’s Beltway leadership and its financial backers among the plutocrat class, the equation clearly looks different. As I have previously argued, the Koch brothers’ many-stranded assault on democracy represents a sophisticated strategic response to the demographic challenges facing the GOP. As it becomes increasingly difficult for Republicans to win elections -- at least when a representative sample of the public shows up to vote -- the oligarchy’s most efficient path to hegemonic rule lies in paralyzing the political process, depressing or restricting voter turnout and making elections appear meaningless. Or, better still, making them become meaningless.

Those tactics have produced the largest Republican congressional majority in more than 70 years, and have shifted the GOP’s ideological center of gravity sharply toward the Puritan right. As we’ve learned over the last few weeks, that is turning out to be a double-edged sword when it comes to the party’s ability to govern and its electoral future. The Tea Partyers and Boehner-scourgers and Benghazi-hunters elected in 2010 and 2014 are largely free of Machiavellian and/or Kochian cynicism and calculation. What they believe may be difficult to describe and impossible to achieve, but they believe it. They are men of principle (with a woman or two thrown in for effect), who were sent to Washington by “real Americans” to save the country from itself, by destroying it if necessary.

To the ideologues of the Freedom Caucus and their public cohort, it is axiomatic that Benghazi, if properly understood, will reveal the perverted depths of the left-wing conspiracy to enfeeble America still further and enslave us to Sharia law and soccer and gender-neutral bathrooms. If polls suggest that a large majority of the public does not want Congress to shut down the government or slash “discretionary spending” to zero or cut taxes for billionaires even further or spend millions on a pointless investigation of a murky but minor three-year-old tragedy – well, those polls reflect the dire effects of leftist media brainwashing and Communist witchcraft. The exaggerated and enduring power of the paranoid right in American politics stems from a quality that is otherwise rare, and has been virtually extinct in the Democratic Party since 1972: They know they’re right and they know they will win, and all evidence to the contrary is simply ignored.

Cotton Mather never repented of his crusade to drive Satan out of Massachusetts, and Joe McCarthy felt sure that history would vindicate his purge of imaginary Reds, even as he drank himself to death at age 48. (His ideological heirs have done their best: Consider McCarthy’s Wikipedia entry, which amounts to an extensive whitewashing of his legacy.) The paranoid style admits no doubt or ambiguity, let alone the possibility that the diabolical forces it perceives are nothing more than its own fears projected onto the world.

Considered on its own dubious merits, Benghazi may look like a feeble parody of those more famous campaigns of persecution, one that is more likely to help Hillary Clinton and hurt the Republicans than the other way around. But even if the Gowdy hearings collapse and the issue fades away (which is no sure thing), “Benghazi” will always be with us. It marks the resurgence of a toxic and dangerous current that has flowed beneath American politics and culture since the first Europeans arrived on this continent, and finds itself newly empowered and militant. That current yearns for a final victory that reaches far beyond such petty matters as politics and elections, all the way to Salvation. Failing that, it will take the Day of Judgment.