How superdonors are gutting America: Here's the research that helps explain a political system's rightward lurch

There's been some debate over the role of the largest donors on the political process. Research tells the tale 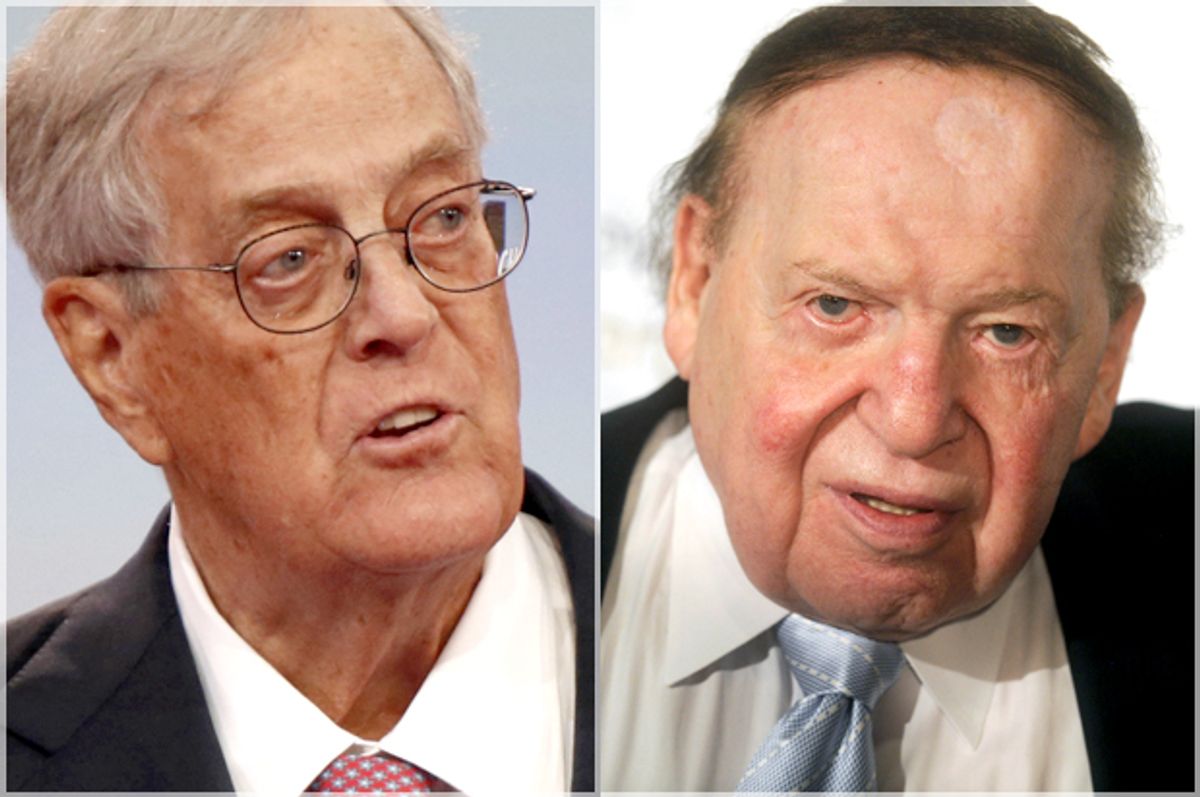 How has the rise of big donors affected our policies? Conventional wisdom suggests that it's pushing our politics to the right. However, in a recent post over at Vox, political scientist Seth Masket, whose work I deeply respect and have read for years, argues that “what's not happening here is the superdonors skewing American politics rightward.”

His argument is that so far in the 2016 election, superdonors have tended to be Republican simply because that’s where the interesting contest is -- and not as an indication of any larger trend. Here, I have no qualms. However, he links to one of his older posts when he notes that “studies of the ideological leanings of superdonors suggest they come from all across the ideological spectrum.” In that older post, he argues that “the 30 wealthiest donors in the country are actually pretty moderate... Apart from some extremists like George Soros and the Koch brothers, most exist between the party medians.” He concludes that, “The super wealthy are certainly paying a lot of money into the political system these days, but it's far from clear what they're getting out of it.”

I believe that both these arguments are flawed, and that big donors are shifting policy rightward. (I’ve addressed evidence for donor influence over policy before.) Masket cites the work of Adam Bonica, Nolan McCarty, Keith T. Poole and Howard Rosenthal, who examine the ideology of the candidates these donors gave to, and by doing so, work backwards to the ideology of donors.

The chart below suggests that the 30 richest American contributors have more centrist CFscores (a metric developed by Bonica for examining ideology) than small donors, while the donors from the Forbes 400 list and the directors and executives of the Fortune 500 companies skew right. The chart also includes the donations of the top .01 percent of donors. (“In 2012, 62 percent of contribution dollars raised from the top 0.01 percent went to Republicans.”) The donations include anything given between 2004 and 2012. However, there are limitations to drawing too much inference from these data to the effect of donors on policy. Since the rich tend to be socially liberal, but economically moderate or even conservative, then this will shift policy in important ways. Indeed, of the five most left of the 30 richest (Larry Page, Sergey Brin, George Soros, Anne Cox Chambers and James Simons), only one, George Soros, is known for being deeply concerned with economic inequality. On the other hand, the far right -- occupied by Charles Koch and David Koch, as well as the Walton family -- tend to pursue an agenda that is very much to the economic right. Further, it’s difficult to know what the scores would look like in historical context. According to DW-Nominate, a similar measure to Bonica's CFscore, “The most conservative Republicans in the House 25 or 30 years ago would be among the most liberal members now.” So it might be that today’s billionaire donors seem to moderate because the scale has already been shifted to the right. Paul Pierson and Jacob Hacker showed in "Winner-Take-All Politics" how increasing reliance on big donors and fundraising has shifted Democrats away from traditional bastions of Democratic support like labor. The Democratic Leadership Council (DLC), which “placed heavy stress on deficit reduction as a key element of economic policy,” was indicative of this trend.

There are other reasons to suspect that donors are shifting policy to the right, at least on economic policy. In a 2010 study, three scholars, Brittany H. Bramlett, James G. Gimpel and Frances E. Lee, examined high-donor neighborhoods. In a previous study, Gimpel and two other political scientists had shown that “the Republican and Democratic donor bases are much more geographically similar than their bases of electoral support.” In their investigation of high-donor neighborhoods with high concentrations of donors have preferences that differ from the rest of the nation.

“Even after accounting for their higher income and education, Democratic residents of high-donor areas are far more supportive of free trade and less concerned with job losses resulting from foreign competition than is typical for members of their party.”

They note that high-donor neighborhoods also tend to be more cosmopolitan (supportive of gay rights and abortion rights, for instance).

Political scientists Peter Francia, John Green, Paul Herrnson, Lynda Powell and Clyde Wilcox find that Republican and Democratic donors are distinct from their bases, tending to be more ideologically extreme. The differences they find are interesting: Most Democratic donors are "liberal on social issues, reinforcing the stereotype of the 'limousine liberal,' whereas most Republican donors are united in their support of business, reinforcing their 'corporate conservative' image.” On the Democratic side, however, they find a large “New Democratic” contingent opposed to redistribution. Somewhat surprisingly, “New Democrats rate the Chamber of Commerce more favorably than they do the AFL-CIO.” The authors find that "large percentage of Democratic donors, especially New Democrats, belong to business organizations." As I’ve shown elsewhere, there is strong reason to believe that the increasing power of these donors, and the increasing marginalization of unions, has pulled American politics to the right.

The chart below comes from an analysis of 2014 CCES (Cooperative Congressional Election Study) data by political scientist Spencer Piston, who tells Salon, “donors are more likely than non-donors to oppose the downward redistribution of wealth.” Another study of CCES data, by political scientists Nolan McCarty and Didi Kuo, finds “very substantial differences between donors and non-donors across a variety of issues. Not surprisingly, donors are considerably more conservative on economic policy.” Thus, there are systematic and substantial differences between donors and non-donors. As with the rich (and likely because many are rich), the donor class is, on average more conservative on economic issues than the general public. The donor class is also more socially cosmopolitan. This makes it hard to disentangle the effect of the donor class merely by looking at the party of the donors or the ideology of the candidates they donate to. Simply because big donors give to the Democratic Party does not mean they aren’t exacerbating inequality: They may be pulling the party away from a focus on the issues of the working class. And simply because donors pull the Democratic party to the left on social issues does not mean they are not pulling the party to the right on economic issues. The evidence cited here suggests that this is the most accurate description of the net effect of donors.

One key way that the rise of big donors has shifted policy to the right is by strengthening the right, and particularly the rightmost wing of the Republican party. Peter Francia and his colleagues find that Republican donors “are most likely to work in the business sector, although there are divisions among Republicans on social issues.” Indeed, the largest conservative donors, the Kochs, have extensively funded an infrastructure devoted to pulling the party sharply right on economic issues. Further, as political scientist Larry Bartels noted in "Unequal Democracy," the Republican campaign finance advantage has benefited Republicans in presidential elections. A recent study at the state level finds that Citizens United finds,

“that Citizens United is associated with an increase in Republican election probabilities in state House races of approximately four percentage points overall and ten or more percentage points in several states.”

Obviously, the studies I cite have limitations -- we can’t examine granular policy data on the super-rich donors the way we can on the merely rich. Masket is right to caution from sweeping assertions about how money influences policy -- there are a lot of dark areas and a lot of grey areas.

But the studies I’ve cited make a strong case that the richest donors likely have preferences that are socially liberal and economically more conservative than the general public. Thus, by empowering the business class and weakening labor, the rise of the donor class has pulled both parties away from economically progressive policy. There is strong reason to believe the rise of major donors has also reduced the influence of low-income and middle-class Americans, women, and people of color.

“We had to struggle with the old enemies of peace -- business and financial monopoly, speculation, reckless banking, class antagonism, sectionalism, war profiteering… Never before in all our history have these forces been so united against one candidate as they stand today. They are unanimous in their hate for me -- and I welcome their hatred.”

It’s hard to imagine any president, Democrat or Republican, saying that today. After all, who would fund their re-election?