I'm a feminist with a football obsession: "I’m interested in the way we love things that aren’t good for us: chocolate, booze, narcissists, football"

Diane Roberts is a feminist and English professor at Florida State. And a football fan, even when that's at odds 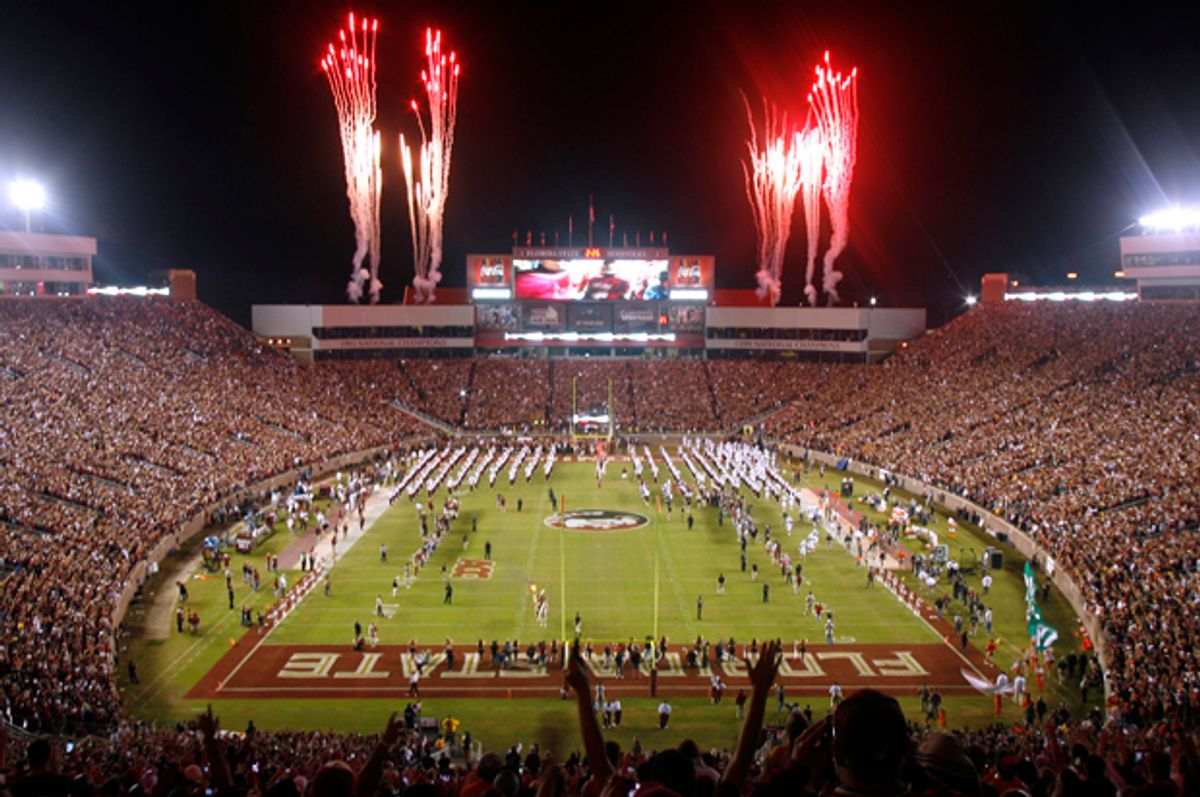 For those fans tortured by the moral quandaries that now surround the multi-billion dollar college football industry — quandaries that begin with an unpaid workforce and proceed all the way to potential brain damage — Diane Roberts’ new book will offer little solace.

"Tribal: College Football and the Secret Heart of America" is a penetrating examination of how and why football has infiltrated our system of higher education, and what role it serves at a school like Florida State University, where Roberts has taught English and creative writing for eight years. (She spent another fifteen at the gridiron-gaga University of Alabama.)

The kicker is that Roberts, an avowed feminist who contributes to National Public Radio and The New York Times, is a passionate fan of the Seminoles. In the midst of another glorious and thus far undefeated season for FSU, Roberts sat down with Salon to discuss what her new book says about old loyalties.

Early on in "Tribal" you talk about how fandom “takes the edge off this painful self-examination, offering a kind of energetic clarity.” But the book complicates the experience of fandom, by suggesting all the toxic attitudes and outcomes football fosters. Does the game still provide you with that clarity?

I can still disappear into the hold-your-breath moment of the game. I holler. I cheer. I sing. I clap. If I’m home watching on television, I coach. I’m really good at calling plays when nobody can hear me. It’s so comfortable and fine to belong, to be part of the tribe, to know that the people around you in the stadium — people who don’t see the world as you do, who might hate your politics — will share the general triumph when your guys score. For a moment, you’re all one family.

It’s why people join churches, political parties, sororities, fraternities, gangs, book clubs. Most of us live tangled in paradox. Loving a college football team is simple and comforting — even when that team loses. When I’m praying that FSU’s quarterback can actually get the ball to that open receiver, I forget all about climate change, Syria and the NRA. When the ball lands in the boy’s waiting hands, the world falls away. Joy takes over.

As a devout fan for many years, I get it. But can I just ask why you decided to open this particular can of worms?

Because it’s my can of worms. I’m trying to figure out how and why this absurd (and gorgeous and thrilling and destructive) game has such a hold on me and other people. I’m particularly interested in the way we often love things that aren’t good for us: chocolate, booze, narcissists, football.

I’m also a product of my culture — a culture I love and celebrate, a culture I deplore and critique, a culture I also try to understand so that its less attractive aspects (those little issues with racism, sexism, glorified violence and the like, all deep-rooted in the history of America and, particularly, the South) don’t prevail unchallenged. Maybe I’m trying to have my tailgate and eat it, too. I dissect the game, disparage it and yet keep on consuming. It’s a part of me.

Sometimes I suspect I’m just creating a cover story that allows me to feed my addiction. You know, like some fundamentalist who assures the faithful that he’s an expert on sin; he’s studied the decadent works of secular society and can declare that, Yes! It’s all filth and wickedness!

As a “feminist with a football problem” how do you feel about cheering for Jameis Winston, the FSU quarterback famously accused of raping a classmate? You write about the accusations, and the negligent police investigation of those accusations, with such disgust. Do you feel that same disgust toward the accused?

I still don’t know what to think. Winston plays with such joy and grace (I will admit to sneaking a look at him quarterbacking the Tampa Bay Bucs). He’s an extraordinary athlete. I think he’s also a bit of an idiot. Most young men are idiots. It’s not entirely their fault: their brains don’t get fully formed until they’re in their late twenties, especially the judgment centers.

Thanks to the half-assed investigation carried out by the Tallahassee cops and the collusion of the athletic department, we’ll never know if Jameis committed rape. Erica Kinsman thinks he did, though her story was not terribly credible in some ways. Clearly something happened that distressed her. I hate to get all postmodern on you, but it may be that each kid is utterly convinced that he or she is telling the truth. As a college professor for more than 20 years, I can say with authority that 19 and 20 year-old boys are the stupidest creatures on the planet.

One of the most fascinating sections of "Tribal" is the investigation of so-called “muscular Christianity.” Can you tell the folks at home what it is and how it fits into America’s football addiction?

I always wondered about all the praying and the thanking the Lord for a touchdown and Tim Tebow advertising Bible verses in his eye-black. I mean, I grew up in the South, where people would say Jesus is Love, then go nuts for a vicious open-field tackle. We went to football on Saturday and divine service on Sunday, often wearing the same kind of clothes — this was back when we dressed properly for a game. But the knitting of Church and football has increased over the past 20 or 30 years, along with the rise of the Evangelicals in American society. Clemson University coach Dabo Swinney is aggressively Christian, even letting one of his players get baptized on the 50-yard-line during practice, never mind that Clemson is a state school. Swinney’s not alone. Many college football teams have chaplains, often hired by the Fellowship of Christian Athletes but given offices on campus and allowed to travel with the team. Many coaches take their players to church. Bobby Bowden at Florida State was completely unapologetic about it. He saw his job as saving souls as well as winning championships.

In Victorian times, certain manly types, including the writer Thomas Hughes, worried that the Anglican Church was becoming “feminized,” with gentle-Jesus-meek-and-mild and Victorian angels who looked like cuddly nannies. He favored a badass Jesus, the Jesus who kicks over the money-changers’s tables, eats your lunch and makes you say thank you. Hughes created a hero, Tom Brown, who read just enough to graduate college but played a lot of sports: rugby-football especially. The exemplary Christian is not a flesh-denying weedy saint starving to death in a desert hut, but a buff, tough, butt-kicking mother who takes up the white man’s burden with a “gun in one hand and a Bible in the other.”

Theodore Roosevelt, who admired the British Empire and wanted some of that stuff for the United States, pushed Muscular Christianity as the path for the true American manly man. Sports channeled sexual desire into athletic prowess. Roosevelt particularly loved football, which he thought built character through bone-cracking tackles. The South took to football like crazy, knotting sports and religion even more tightly. These days, the Fellowship of Christian Athletes, with its thousands of chapters, keeps Muscular Christianity thriving. Peace, love and understanding are all fine, but beating the hell out of your opponent on the gridiron makes Jesus smile.

As a college professor, what you make of football’s influence on the mission of higher education? Does it trouble you that most Americans think of FSU as a football team, not a college?

I hate that people think FSU is nothing but football. When I taught at the University of Alabama, I hated that people associated it only with football, too — that and George Wallace standing “in the schoolhouse door.” FSU should be known as the site of the National High Magnetic Field Laboratory. Or the home of Carlisle Floyd, America’s pre-eminent opera composer. UA has great schools of law and journalism and a famous Shakespeare program. Doesn’t matter. It’s all Bear Bryant and Bobby Bowden, Jameis Winston, Roll Tide and rapey players. It ain’t fair and it ain’t right, but it’s reality. I don’t see how we change it until we uncouple big money sport from big educational institutions.

How we do that uncoupling beats me. The NCAA will have to go — that really will happen in maybe the next decade or so. Then football will have to change as a result of years of lawsuits by people harmed by brain damage. Maybe then we’ll decide that college teams are NFL farm teams. It’s hard to say that football serves any kind of educational mission. Deion Sanders didn’t bother to go to class his last season of playing for FSU.

Much as I’d love to holler that the football program takes money away from the library, it doesn’t really. When FSU won the National Championship in 2013, applications for admission went up quite a bit. This means we can raise our academic standards. That’s a good thing. Money came in, though not for the academic departments. What happens is that the state legislature, on which we depend for a chunk of our funding, gets most excited about a winning football program. Many of our legislators (Florida is particularly bad about this) deny evolution, the Big Bang, climate change. They don’t like scholars. We distrust eggheads. We’re more comfortable with meatheads. Howling for blood with 85,000 members of your tribe is more satisfying to most people than listening to a poet read his work.

Can football and academics be uncoupled if college football fans and other members of the academic community demand it? Would you be one of those who demands it?

Much as I’d love to think that professors could demand that universities divert resources and energy from football and basketball, we have very little power. In the sports economy (always far bigger than the academic economy) we’re replaceable. The people with the power are the ones who buy the tickets. And the parents of kids who play the game. You can’t have a game without players and if more parents decide that their kid isn’t going to endanger his body and brain, that might force a conversation, maybe even change. But until we stop telling poor kids that being a hot-shit athlete — instead of a hot-shit physicist or coder — is your ticket to the American Dream, underfunded high schools in places like Cairo, Georgia; Hoover, Alabama; Batteville, Mississippi and the less salubrious parts of Miami will continue to stress playing over studying.

I hate to sound like Donald Trump, but in America, money wins. Football makes money. Until colleges and the NCAA start having to pay out gigantic dollars in the lawsuits over the exploitation of young people’s labor, as well as wrecked brains and bodies, not much will improve. This will take a long, long time. It’s like climate change: most of us know it’s real. We know it’s dangerous. But we’re comfortable living the way we do, with coal plants spitting out nasty stuff but giving us cheap energy.

We’d rather the scientists come up with a way to somehow fix the planet. That’s easier than changing our destructive behavior. In football, we’ll assume that somebody will make a better helmet. Or more padding. Or something. That’s easier than actually confronting reality. Americans aren’t comfortable with too much reality.