In defense of American elitism: The alarming truth about the rise of Donald Trump 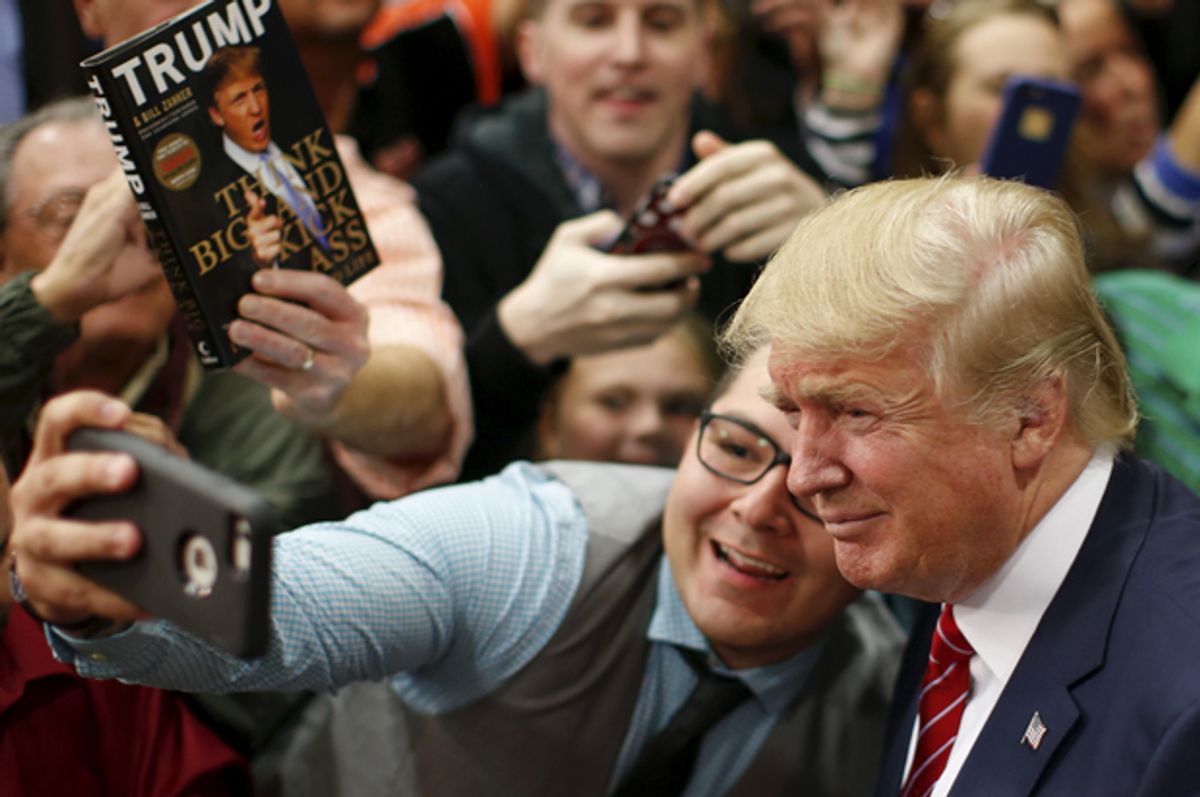 One of the imperishable clichés of American political discourse is the idea that a populist uprising could cure all the ills currently afflicting the nation’s government, economy, and culture. Abraham Lincoln’s dream of governance “by, of, and for the people” has mutated into a deathless trope, emanating from megaphones in the hands of charlatans, philistines and fools.

The debate and dichotomy between populism and elitism has its origins in the foundation of the United States. Alexander Hamilton believed that an educated elite should legislate and lead with the consent of the governed, while Thomas Jefferson envisioned a “nation of farmers” in which the power of ordinary people surges through the halls of capitol buildings everywhere.

It is indisputable that Jefferson has won the hearts of minds of the American people. The Tea Party right and the hard left form an odd consensus of popular revolt. The typical Trump voter and the average Sanders supporter might disagree on most policy questions, but they will agree that the masses must wrestle control of the country from the hands of the greedy, self-serving, and unprincipled elite. Should anyone question the populist assumption, as Mitt Romney did from the far right during his infamous "47 percent" speech, his political career is likely to meet a cruel and painful end.

The informed observer, even if shamed into silence, has to occasionally examine the cultural landscape, the political dialogue, and the average American mind, and wonder: Who the hell are these people that right-wing and left-wing organizers expect to manage the institutions of the country, craft public policy, and offer leadership to an increasingly fragmented and ignorant public?

A general rule to follow whenever someone makes a specious argument or attempts to swerve an audience into an illogical conclusion is to get the arguer to commit to a number. The numbers demonstrating the lack of knowledge, curiosity, and empathy among the general public are absolutely terrifying, and are sufficient to cause even the most naïve “power to the people” activist to reconsider the concept of democracy.

According to a large survey conducted by Newsweek, 44 percent of Americans cannot identify a single part of the Bill of Rights. Other reports indicate that two-thirds of Americans cannot name a single Supreme Court Justice, and 29 percent do not know the name of the current Vice President. The Intercollegiate Studies Institute found that only half of the Americans they polled could correctly identify all three branches of the federal government.

The sad statistical data also reveals that a quarter of Americans believe that the sun orbits the earth, and that 42 percent do not believe in evolutionary biology.

As any good teacher would attest, lack of knowledge is forgivable and fixable if the pupil demonstrates a commitment to intellectual excellence through study and labor. An overwhelming majority of Americans are not only ignorant to the basic facts of history, civics, and science, but are brazen about their ignorance – apparently feeling no need to learn or improve. A recent Pew Study shows that only 29 percent of Americans regularly read a newspaper, in print or digital form, and that 24 percent of Americans do not read even one book a year. Among the majority of Americans who do read a single book in twelve months, it is safe to assume that many are reading Joel Osteen’s latest manual for accumulating wealth through prayer, the memoirs of children who die and leave a Yelp review of Heaven, or Bill O’Reilly newest installment in the best-selling “Killing” series.

In all fairness, many Americans are not consistent readers because they cannot read. The United States Department of Education recently discovered that 14 percent of Americans are illiterate, and nearly a quarter of Americans read below the fifth grade level.

The politics of contemporary America accompany the illiteracy and ignorance of contemporary Americans with the symbiosis of flies and excrement. Fifty-nine percent of Americans support the use of torture against suspected terrorists,<--- LINK while under half of Americans express concern that drone strikes overseas result in the loss of innocent life. In 2014, 38 percent of Americans told the First Amendment Center at Vanderbilt University that the First Amendment “goes too far” in the freedoms it guarantees and protects.

When one drops the erroneous assumption that most Americans are smart and sophisticated, the monstrosity of recent policy disasters begins to make sense. President Bush and his gaggle of goons were easily able to convince the majority of Americans that Saddam Hussein had some connection to the terrorist attacks of Sep. 11, 2001, because most people who aren’t reading newspapers or books, and suffer from scant awareness of elementary history, are easy marks for manipulation. In states like Illinois and Kansas, voters elect governors who promise to cut social services and kill public programs, because they believe that through some magical GOP osmosis they will become rich, and that the poor deserve whatever torture and torment they receive. Such cruelty will only continue, as the Scientific American reports that current college students demonstrate lower rates of empathy than any previous generation.

It is now perfunctory that any book documenting and describing the decline of America – from "Bowling Alone," Robert Putnam’s look at the collapse of community to Noam Chomsky’s numerous inspections of America’s turn from democracy to oligarchy – ends with a hopeful chapter providing a miracle cure. Americans, the off key and out of tune refrain goes, are only the right amount of organization, or the correct level of consciousness elevation, away from turning it all around, organizing as a coherent movement for justice, and creating an Edenic paradise. It is almost as if the smartest men in the world have received lobotomies. Their sunny forecast of populist revolt is about as charitable, and credible, as a doctor telling a patient in full death rattle that she is just minutes away from recovery.

If the people bust down the barricades, seize control, and occupy the thrones of power it does not seem likely that they would nominate Putnam or Chomsky as President. It seems even less likely that they would govern according to their ideas. The voters who preferred George W. Bush over Al Gore and John Kerry because he seemed a better companion for sharing a six pack of beer -- and those currently propelling Donald Trump to the top of the polls -- seem to offer a better insight into America’s future, should the populists triumph.

It is unpleasant to look into the hideous face of reality, but delusion is even worse. The truth shall set you free, as The Bible instructs, and the truth right now is that America is not ready or ripe for rebellion from below. Such a rebellion would result in catastrophe for civil society.

A populist uprising would produce positive change only if it followed a massive cultural transformation. First, American schools would have to restore academic excellence and intellectual rigor to the classroom. Educational institutions, from kindergarten to college, would have to address the whole human person with a full bodied curricula of science, mathematics, the fine arts, civics, humanities, history and philosophy. Rather than demanding conformity, it would encourage creativity, and instead of teaching to the test, it would instill values necessary for independence, curiosity, and exploration. High quality education in the liberal arts tradition, rather than according to the standardized perversion, would have to become accessible to not only the rich, but Americans of all income levels. American families would then have to stop obsessing over the market, and begin to raise their children with an emphasis on wisdom, not wealth, and an insistence on intellectual growth, kindness, and compassion. Only then would the media begin to seek a new audience of smart consumers, and politicians would begin to raise the bar to compete for votes and donations among an informed public.

What the current moment of American politics and culture demands is not the banishment of the elites, as so many with the microphone advocate, but a defense of elitism. The elites are the only people keeping America on balance as a livable and navigable society. The cheapest pop in politics is derision of the “elite,” but who are these elites?

It is certainly true that educational pedigree does not guarantee intelligence, and by no means does it indicate wisdom. Some of the smartest and most talented people I have met never graduated college, but degreed Americans are the ones maintaining the nation’s infrastructure against the odds of inadequate funding. Degreed Americans are the ones making sure that direct deposit money transfers are going into the right accounts, and that schools, even while they decline, are at least teaching something to children and young adults. Degreed Americans are managing the laboratories, and running the hospitals. They are making sure that the buses are arriving at the corner, and the trains are pulling into the stations, on time. They are the ones keeping the books on profitable businesses and solvent city governments. They are the doctors operating on sick people, and they are the social workers making sure that the poor and disabled receive some semblance of assistance in a country committed to cutting out its safety net.

In a country of 300 hundred million people, a small slice of elite workers, administrators, managers, and technocrats – 10-20 percent of the public – can keep the wheels turning for a long time. A populist revolt threatens to knock the wagon off the wheel, and consign the country to the ditch. Consider how governmental experience in many Republican and Democratic quarters is now considered a liability to gain insight into the suicidal direction populism is set to take America. Public administration and political legislation are not tasks one can simply learn on the fly. Like any other complicated job, they require knowledge gained through the experience of trial and error. Populism is the last thing a country suffering from institutional decline needs. America needs more elitism, and it needs it fast.

The only way to accomplish the leadership superiority elitism offers without violating the democratic spirit of the nation is to begin making more elites and more egalitarian elites. Instead of a “nation of farmers,” America should become a nation of leaders. The approach of William Deresciewicz, author of "Excellent Sheep: The Miseducation of the American Elite and the Way to a Meaningful Life," seems exactly right. The Ivy League professor is advocating for the nation’s best schools to abandon the neoliberal reduction of everything to the market standard, and exercise the holistic option of using their abundant resources to prepare young adults not only for careers, but for citizenship. The typical graduate of Harvard or Yale should not only seek to earn great wealth, but she should look to become a communal asset, a curator of the arts, and an agent of compassion.