The real genius of "Sweet Jane": The 2 little letters out of Lou Reed's mouth that say so much

Let's take a very, very close look at one of the Velvet Underground's most enduring songs 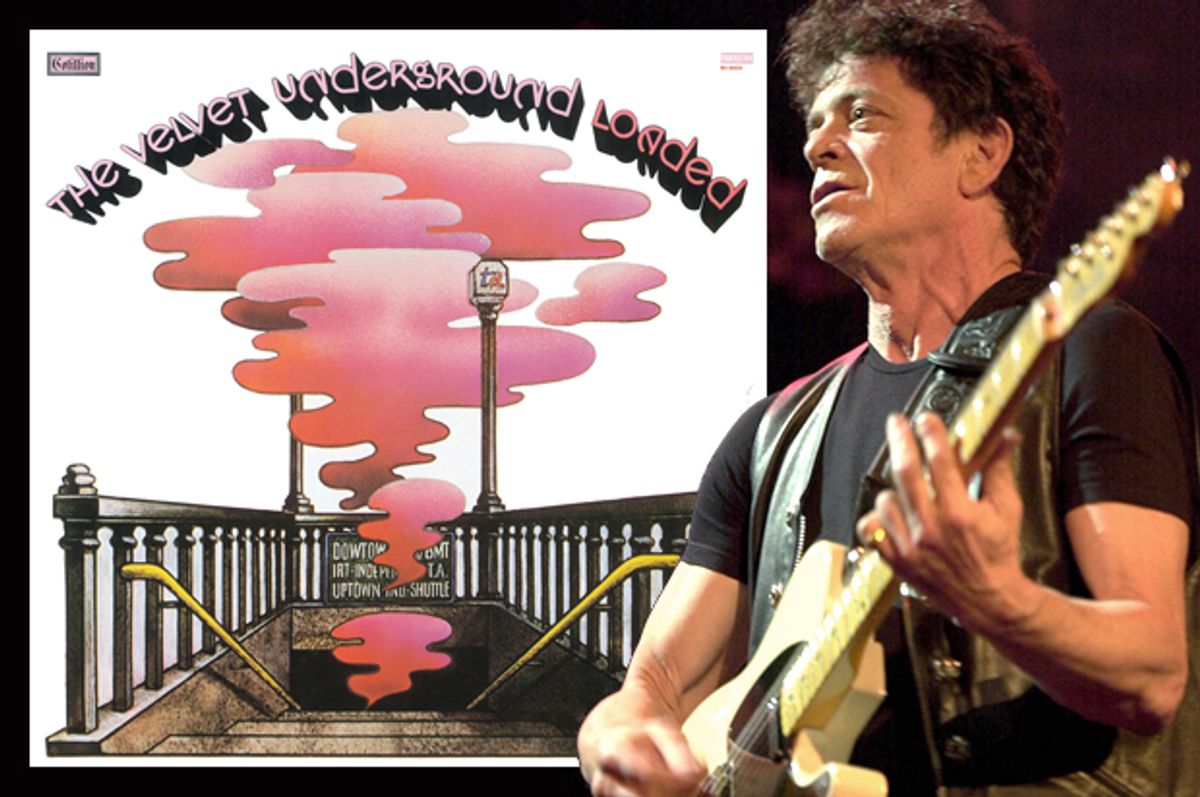 "Loaded," the Velvet Underground’s fourth album, released in November of 1970 and getting the grand box set treatment next Friday to mark its 45th anniversary, was the last to feature Lou Reed. It was also the last Velvet Underground album I bought and listened to on my quest — 15 years after its original release, and in the flush of my teen rock-geek years — to own every note this band every recorded. For some reason, "Loaded" was the hardest one to track down. (I know it’s difficult to imagine not being able to locate a record these days, but it was 1985.)

I knew as I scoured the bins that "Loaded" was the original home for a pair of Velvet Underground songs that had already taken on legendary status by the '80s, “Sweet Jane” and “Rock and Roll.” But the only version of “Sweet Jane” I'd heard at that point was the one off Lou Reed’s live album "Rock n’ Roll Animal," which was widely acknowledged as a way to place the irascible star back on the charts after he chose to follow up his breakthrough "Transformer" — which David Bowie and his late guitarist Mick Ronson crafted into a glitter-era sensation — with the dour, Bob Ezrin-produced "Berlin." Recorded at the Academy of Music with a shit-hot band around Christmas of ’73 and released the following February, "Rock n' Roll Animal" was indeed a big hit during an era when rock radio DJs had no fear of playing really (really) long songs.

That live version of “Sweet Jane” comes with an extended intro — if you happened to turn in before those chords smashed down, you might think you were listening to Yes. But then there’s a wave of applause and Reed strolls onstage, and begins to sing in his tough monotone. He’s got bleached blonde hair and never takes off his extra dark aviators:

Some years later I happened to hear the Jim Carroll Band’s version of the song which is (although I adore and once dyed my hair orange to emulate Carroll …) pretty weak. Worse, Reed appears in the video:

"Catholic Boy," it ain’t. Even the mighty Mott the Hoople did another anemic version in ’72:

I’d heard Jane’s Addiction’s slurry, meandering, percussive version of “Rock n’ Roll” before I ever heard the Velvets. But when I finally found a copy of "Loaded" in college, I realized what I had been missing. “Rock n’ Roll” was clear-eyed and true. Lou, his alter ego “Jenny” (not to mention Perry Farrell and me, too) were all misfits from Long Island where there was “nothing going down at all.” Despite all the complications, we could dance to the rock and roll (and the disco and the hip hop) station. I loved “Cool It Down”  and “New Age” (which reminded me of Sylvia Miles and Joe Dallesandro’s affair in the Paul Morrissey-directed Warhol film "Heat"). “Lonesome Cowboy Bill” was kind of a throwaway, as was “Train Going Round the Bend,” but “I Found A Reason,” a gentle doo wop (later covered by Cat Power) and “Oh Sweet Nuthin’" (which has since found its way onto several soundtracks, including Stephen Frears’ "High Fidelity" and Sam Mendes’ "Away We Go") were stunners.

But it was almost immediately clear to me what I had been truly missing all these years. “Sweet Jane” is the second song on the album, after the bubblegum sweet “Who Loves the Sun” (a showcase for Doug Yule, who replaced the more avant John Cale), and it begins with a guitar squiggle followed by those steady, wave-like chords (unmistakable in any version), and just like in the live "Rock n’ Roll Animal" version, Lou sings: “Standin’ on the corner, suitcase in my hand. Jack’s in his corset, Jane is in her vest and me I’m in a rock and roll band… Ha!”

What makes the "Loaded" version life-changing and revelatory after such a long wait is that “Ha.”  To me, that "ha" is everything: New York City, the art demimonde, the fact that most rock and rollers don’t hold down jobs too long except for those in rock and roll bands (and sometimes not even those), the fact that “standin’ on the corner” is cooler than anything you are doing, even if the suitcase is full of used books to sell at the Strand on Broadway. “Ha!”

In fact, I’d had some occasion to ask Lou … two interviews. One in person where I, starving, had to watch him eat some kind of sauce-covered cutlet slowly while we discussed "Berlin." His manager was there — ask any rock writer  (if you can find one these days) whether they want managers, publicists, record company people, wives, husbands, anyone who is not the rock star anywhere near the interview and see what they say. He would never admit to me where the “Ha” came from. He didn’t even fucking know where the “Ha” came from. Did he write it?  Did he plan it? No. I don’t think so. “Ha!”

The young today, I hope they know what to do with the “Ha,” since it’s so easy to hear and use now. It’s like cocaine. You used to have to know someone; now all you need is a code. Smack, you used to have to take a walk in the dark, and now you can have it sent over like a taco plate (I’ve heard). “Ha!” in the wrong hands is a dangerous thing.

“Ha!” in my hands was a friend. That “Ha” and I are nearly the same age. It’s been there my whole life, waiting for me. And when I found it, my life was saved … by rock and roll.

I can’t defend the author of that “Ha” or what it made him do. It’s been documented before and it’s about to be, now that he is gone, documented again and again in books and inevitably films. Lou was “a monster,” a bad man, a crank, a grouch, a sharp tongued, cranky, short-fused bastard — the Lou I met anyway, and apparently the Lou a lot of other people met, too — but I can’t help but think the “Ha” is his better and not his darker angel.

He’d been chasing the “Ha!” He admitted as much. If he could have written “Sweet Jane” every time, he surely would have.  Instead, he did "Metal Machine Music" and a bunch of hit and miss albums until 1989’s "New York," which landed him on the cover of Rolling Stone. Then he got pretentious again. I once attended a benefit show that advertised Lou, and I saw him get up, mumble some Poe and then shuffle off stage. “Ha!” Good cause, I guess, who can complain.

I should probably also put in a word for the lost bridge. The “heavenly wine and roses…” bit that was as gorgeous as “Candy Says” and “Femme Fatale” but was inexplicably cut for space? (“Ha!” to you too, Lou, the label seemed to say.) The Cowboy Junkies' version was heroic in its restoration of that bridge, and they were rewarded with a big hit that college kids used to put on mix cassettes for each other in hopes of having sex. (Well, this college kid … “Ha!”)

There is also an utterly batshit version of "Sweet Jane" on the live "Take No Prisoners" album, in which Lou rails against rock critics and the hipster scene and just about everything else:

The album is more of a stand-up routine than a live document, but as such it’s a lot better than most UCB grad bullshit. Lou was a lot of things, and one of them was seriously funny — Listen to “Ferryboat Bill” or “Andy’s Chest” if you doubt me. So happy birthday, "Loaded." Happy birthday, “Ha!” And rest in peace Lou, Jack, Jane, Jim … all the protest kids and, I don’t know … Taylor Mead. I hope you’re all tooling around in your Stutz Bearcat somewhere in the sky, high above the Empire State Building and the city and all its empty ghost corners.