The neurosurgeon-turned-candidate couldn't in any rational world be viewed as a serious contender. And yet... 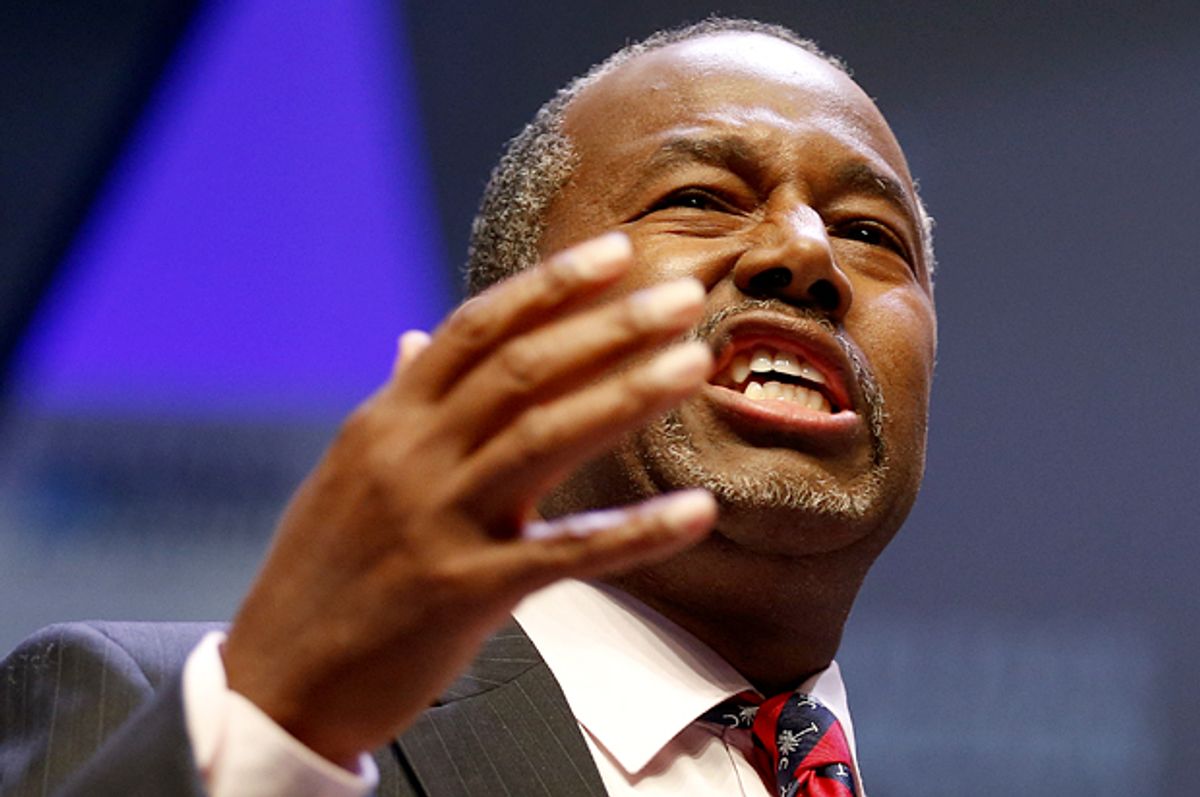 This article has been corrected since it first published.

On Sunday's "Meet the Press," Chuck Todd asked Dr. Ben Carson about his alleged "low energy" personality, to which Carson replied that as a young man he attacked people with rocks, bricks, baseball bats, hammers and even tried to stab someone. For the record, here's exactly what the pediatric neurosurgeon turned Republican presidential hopeful said:

I have plenty of energy. But, you know, I am soft-spoken. I do have a tendency to be relaxed. I wasn’t always like that. There was a time when I was, you know, very volatile. But, you know, I changed. As a teenager. I would go after people with rocks, and bricks, and baseball bats, and hammers. And, of course, many people know the story when I was 14 and I tried to stab someone. And, you know, fortunately, you know, my life has been changed. And I’m a very different person now.

"Relaxed" understates how soporific he is. It's a personality trait that helps to sell many of his ghoulish remarks, such as when, on Sunday, he totally overcompensated for his somnambulant behavior by revealing that he physically assaulted people with crap found in his garage. Of course it plays within the same theme as Carson's hubristic pledge to attack an active shooter, even if it meant being shot and killed in the process. It's really only a matter of time before Carson reveals that he's a ninja.

It seems that during every interview he plays the same game: Make news by blurting crazy things, but in a tone of voice that sounds like a doctor prescribing painkillers. There's just something about a world-class neurosurgeon delivering nuggets of insanity that Trump could only dream of. While he obviously suffers from a raging God-complex, his background and his non-Trump-like temperament adds an important patina of legitimacy to his syllabus of inconceivable statements. Perhaps that explains why Iowa Republicans appear to embrace every chunk of his nincompoopery. Contra Trump, Carson simply doesn't sound like a nut, so he must not be a nut.

The following statement was presented to respondents:

"I'm going to mention some things people have said about Ben Carson. Regardless of whether you support him for president, please tell me for each if this is something that you find very attractive about him, mostly attractive, mostly unattractive, or very unattractive."

1. “He is not a career politician”: 85 percent
2. “He has no experience in foreign policy”: 42 percent
3. “He was highly successful as a neurosurgeon”: 88 percent
4. “He has said the Affordable Care Act, also known as Obamacare, is the worst thing since slavery”: 81 percent
5. ”He has an inspirational personal story”: 85 percent
6. “He has raised questions about whether a Muslim should ever be president of the United States”: 73 percent
7. “He has said he would be guided by his faith in God”: 89 percent
8. “He has said that Hitler might not have been as successful if the people had been armed”: 77 percent
9. “He approaches issues with common sense”: 96 percent
10. “He has conducted research on tissue from aborted fetuses”: 31 percent

Of course, it's more than alarming that 81 percent of Iowa Republicans think it's awesome that Carson falsely correlated abortion and slavery, or that Hitler might've been thwarted if the Jews were armed. But what's even more revealing is that 31 percent of Republicans -- again, Republicans -- think it's okay that Carson conducted experiments on aborted fetal tissue, knowing that Planned Parenthood is being furiously vilified for donating tissue to similar endeavors. For what it's worth, 21 percent of respondents said they were "Not Sure" on the fetal tissue question, augmenting the share of Republicans who might be okay with Carson's fetal tissue research to 52 percent. Along the same lines, 42 percent were cool with the fact that Carson has literally zero foreign policy experience.

(His lack of foreign policy acumen is made worse when coupled with the fact that he also has zero public policy experience, zero political or legislative experience, and he doesn't know a damn thing about the debt ceiling.)

There's another layer to this phenomenon, which is that Republicans might simply be more attracted to characters who blurt controversial things, even if it means blindly supporting ideas that'd otherwise be objectionable. We all know exactly why: GOP voters have been slowly conditioned by AM talk radio and Fox News to accept increasingly incoherent proclamations as long as they originate from within the bubble.

As we've observed with increasing frequency over the last 10 years, the modern news media and especially the internet rewards people of any station who market in rhetorical extremism and specifically what can only be defined as intellectual violence. The conservative entertainment complex is loaded with characters who are engaged in this exploitative gambit. Leaning on far-right shibboleths and hurling red meat is the new business model for success in the GOP. Often, as illustrated by Carson's demonization of Planned Parenthood while simultaneously having used aborted fetuses for research, the process if both controversial and horrendously contradictory.

Take, for example, Mitt Romney’s 2012 pledge to repeal Obamacare. It played extraordinarily well with the base and magnetically yanked Republicans to the polls, but fast forward three years and now that he’s no longer running for anything, Romney admitted that Obamacare is a good thing. (In predictable form, Romney flip-flopped on his support for Obamacare 24 hours or so later.) Likewise, Ted Cruz flirted with signing up for an insurance policy through Obamacare in spite of being the law's self-appointed nemesis. As for Trump, the hands-down master at this form of duplicity: Most of what he's blurted is directly contradicted by almost everything he's said in the past. None of that matters any more, as long as the shibboleths continue to fly. The crazier the better.

The big takeaway from the Des Moines Register/Bloomberg Politics poll is that obnoxiousness on the stump has become a magic bullet for polling success, at least on the GOP side. Knowing this, don't expect it to end any time soon. Indeed, it's just getting started.