Paul Ryan caves to the wingnuts: He's already looking like a hostage of the insanity caucus

The boy wonk was supposed to tame the hardliners. Instead, they're already setting the terms for his speakership 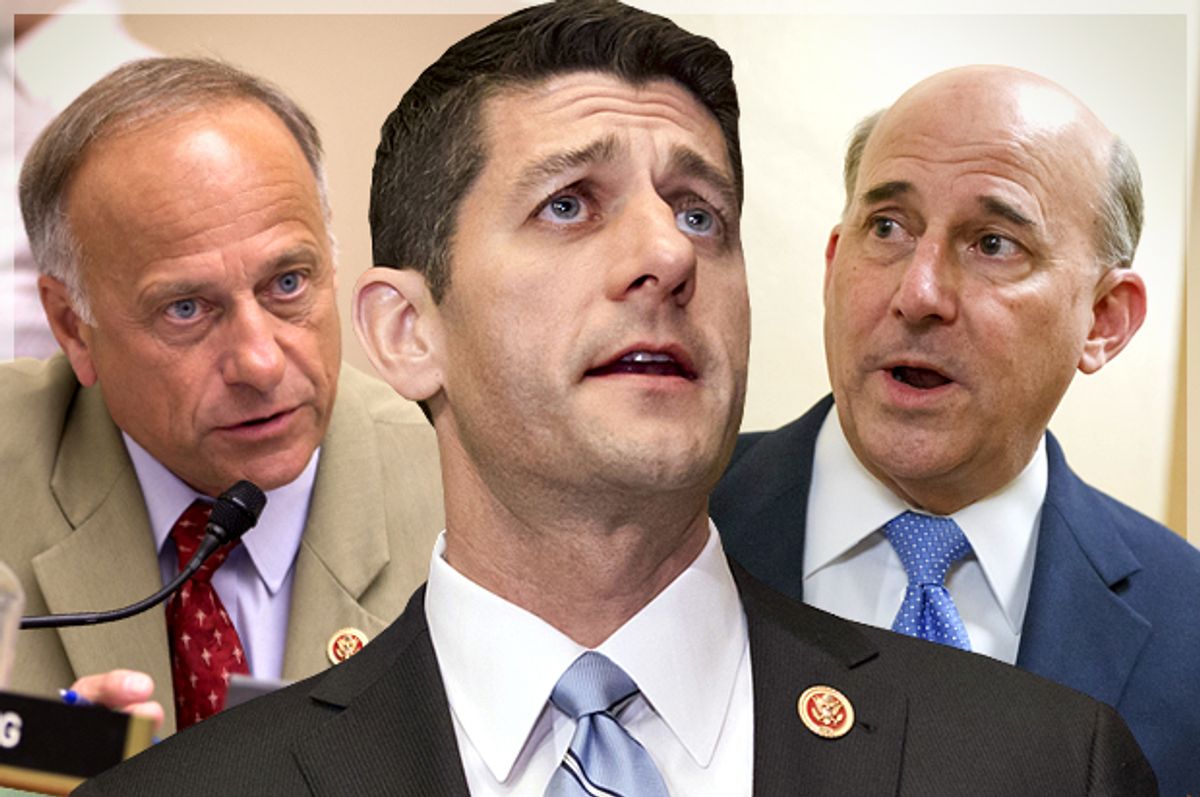 Paul Ryan is ready to step into the maelstrom. On Wednesday, his colleagues will likely elect the boyish wonk to be the Speaker of the House, possibly the most thankless job in Washington behind Dan Snyder’s therapist. But he gets a bigger office, so that’s exciting.

Much ink was spilled over the conditions Ryan demanded of the Republican caucus before he would agree to run for the speakership. Those included the endorsement of the House Freedom Caucus, that group of 40 or so far-right representatives who have turned the chamber from a semi-functional body into something Jigsaw might have dreamed up if he had a political science degree.

It turned out Ryan’s requirement was more of a suggestion. The HFC called his bluff, with a majority agreeing to support him but not give him the unanimous endorsement he had sought. He folded quickly anyway because, hey, bigger office.

So now that he has established a precedent for folding early, it’s fair to wonder how Ryan is going to deal with this list of insane demands for the next Speaker that the HFC put out back before Kevin McCarthy took himself out of the running by putting his foot in his mouth and chewing it off at the ankle. Taken together, the changes the HFC wants would make the House even more dysfunctional than it is now, a state that some might not believe possible.

The New York Times has entertaining translations of all 21 questions the HFC put forth. Having deposed RINO squish John Boehner, the radicals are obviously flexing their muscles, trying to weaken the speakership and decentralize the position’s power as part of some misbegotten plan to push through much of their pet agenda. Because when you can’t get your policies enacted through persuasion and compromise with your opposition in both parties, brute force and whining is the way to go.

Take question number 13, which reads: Would you attach significant structural entitlement reforms included in the FY 2016 budget resolution, such as welfare reform, and significant process changes, such as legislation establishing an automatic continuing resolution and the Default Prevention Act, to legislation that would raise the debt limit and not schedule the consideration of another vehicle that contains a debt limit increase? The Times translates this as asking “to hold the debt limit hostage until we prevail on other issues.” In other words, the HFC would like Ryan (or some other theoretical future speaker) to commit to defaulting on the government’s debt in just a couple of weeks unless they can get the Senate Democrats and the White House to negotiate on the conservative wet dream of eviscerating Medicare, Medicaid, Social Security, and who knows what else. You know, the same approach they tried two years ago that led to a sixteen-day government shutdown and got the far right precisely nothing that it wanted.

Or question 4: Will you oppose proposals to amend conference rules to punish members for procedural votes? In other words, as the Times puts it, “Can we continue to buck the leadership without retribution?” These 40 people want to stick to their positions no matter how much of a headache they create for their leadership, the opposition party, their colleagues in the Senate, the White House, the American people, the world’s economy (in case of a debt default), pretty much the entire universe in general. And when they do, they would really like it if they could not have to endure any consequences that might affect their re-election chances or their delicate feelings, the poor snowflakes.

This state of affairs is partly a result of the weakening of the speakership overseen by Boehner. Having pushed to eliminate earmarks, those budget items destined for a particular representative’s district that past speakers used as leverage to keep recalcitrant caucus members in line, Republican leadership now has fewer ways to force members to vote in favor of anything from party initiatives to basic functions like funding the government. The few pressure points still open – committee assignments, party money directed to election campaigns – are in the HFC’s crosshairs. If they push the Republican leadership on this list, those will be the next to go.

Ryan has reportedly already agreed to abide by the “Hastert Rule” (number seven on the list) and promised the HFC he would “devolve power to the membership,” resulting in an even more decentralized Republican caucus than the one that for the last few years couldn’t find water if it fell out of a boat. It’s unclear if he has promised to consider any of the HFC’s other demands. However, the fact that he caved so quickly on his own demand for a unanimous endorsement does not bode well. If Ryan’s compromise with himself to hold the Speaker’s gavel involves allowing the right wing to continue running wild and wreaking havoc, his tenure will be even rockier and worse for the country than Boehner’s has been.