The real Benghazi scandal that is ignored: How Hillary Clinton, the Obama admin. and NATO destroyed Libya 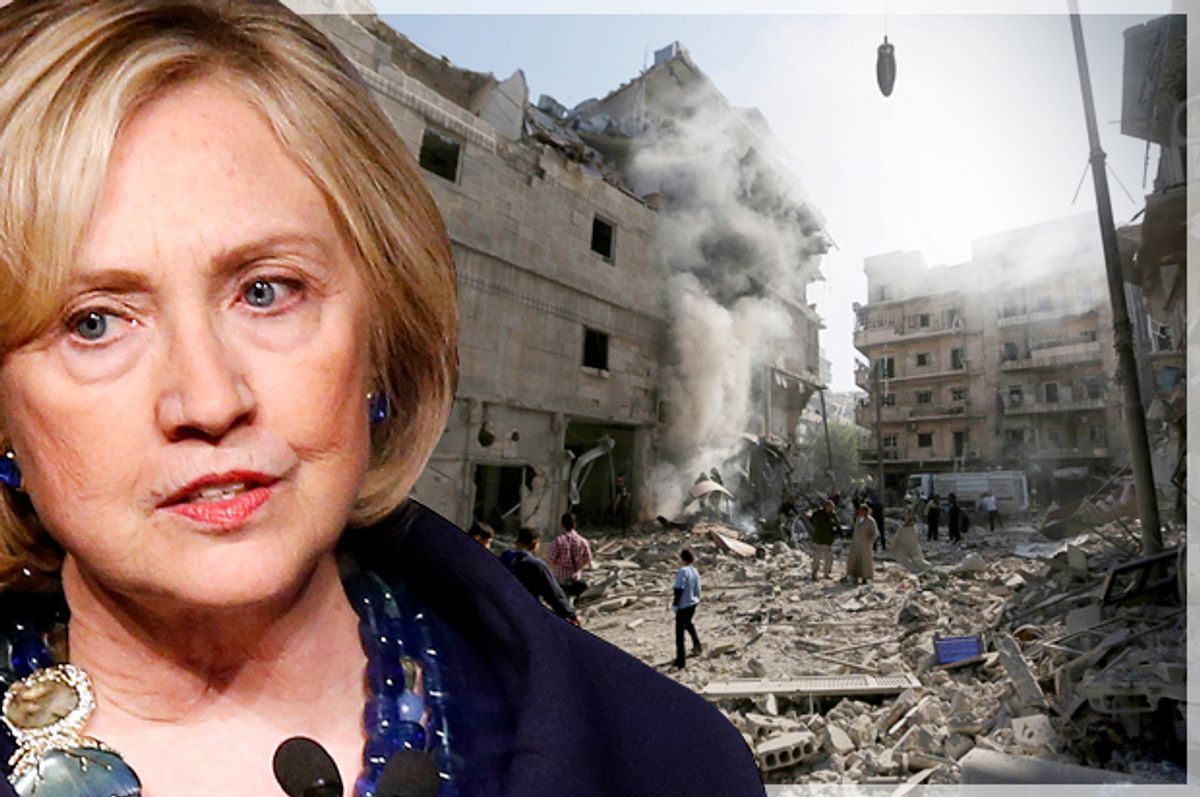 There are few groups more skilled in missing the forest for the trees than the Republican Party. The GOP has an absolutely uncanny ability to ignore what is right before its very own eyes in its dogmatic quest to fabricate scandals where there aren't any.

Nowhere is this more evident than in the American Right's bewilderingly impassioned obsession with the 2012 attack on the U.S. consulate in Benghazi -- a fanatic fixation that verges on the unhinged. There have been seven official investigations into Benghazi -- more than there have been into any other actual scandal in recent history -- and yet the GOP has still called for more. This deranged fanaticism culminated in an Oct. 22 hearing in which Republicans grilled former Secretary of State Hillary Clinton for eight long hours.

After all of this work, after years of investigations, after however many millions of dollars poured down the drain, the GOP has not found the controversy it was looking for. Ironically, its efforts have precipitated numerous actual controversies -- most notably Clinton's potentially illegal use of private email servers, among others -- but not the particular smoking gun it insists is there.

In its laser-like probing into the Benghazi tree, however, Republicans have ignored the much larger forest: The U.S. destruction of Libya.

In 2011, the U.S. led a NATO coalition that bombed Libya for over seven months, destroying the government and leaving behind a political vacuum, large parts of which have been filled by extremist groups. Today, downtown Benghazi is in ruins, and chunks of the city are under the control of Ansar al-Sharia, an extremist Salafi Islamist militia that is designated a terrorist organization by the U.S.

As for the rest of Libya, much of the land is now controlled by rival warlords. The country is divided into four major regions. The internationally recognized government in the east is caught up in intractable conflicts with fascistic ISIS affiliates, which control the city Sirte and a sliver of the north; more moderate Muslim Brotherhood-aligned rebels known as Libya Dawn, which control the city of Tripoli and the northwest; and tribal militias, which control the southwest; not to mention the vast array of smaller militant groups fighting throughout the country.

No end is in sight for Libya's civil war, which has already dragged on for many months, leaving thousands of people dead. Because chaos reins in large swaths of the country, there is no official figure for the deaths. The project Libya Body Count, which simply compiles media reports, and is thus conservative in its estimates, has documented over 4,000 fatalities since 2014.

This violent chaos has furthermore sparked a flood of refugees, exacerbating what is already the worst refugee crisis since World War II. Hundreds of thousands of Libyan civilians have been forced to flee, often on dangerous smuggling boats. As of December 2014, the U.N. estimated there were over 370,000 displaced Libyans. The number is likely higher today, a year later.

Mere hours after Clinton's day-long Republican interrogation, at least six Libyans were killed and dozens more were wounded when militants in Benghazi fired rockets at a protest against a U.N. proposal for a unity government.

Benghazi the city, ignored by the Benghazi conspiracists, remains roiled in violence. In the words of AP, the city is "shattered." As The New York Times describes it:

"Random shells sometimes fall out of the sky in various parts of the city. Trash piles up in the streets. Rolling power blackouts can last for five or 10 hours and sometimes engulf the entire city.

Fighting in the farmland around the city has created a shortage of vegetables. An influx of those displaced from war zones has overcrowded the safer neighborhoods, straining tempers. Public schools remain closed, and children have nothing to do.

The Islamist militias appear to be welcoming foreign fighters into their ranks and there are reports of suicide bombings."

A Benghazi man told The Times "I don’t see anyone smiling... The city we grew up loving is not the one we see today."

This is the real Benghazi scandal. Yet it is being ignored.

There is no dearth of actual Middle Eastern scandals the Republicans could go after. There is the Obama administration's drone program, which has left thousands dead, including hundreds of civilians. Or its $90 billion of arms deals with oil-rich repressive theocratic Gulf monarchies in just four years. Or its expansion of the disastrous war in Afghanistan, where it has bombed hospitals. Or its steadfast support for the Saudi-led coalition that is raining bombs down upon Yemeni civilians. The list goes on.

The destruction of Libya is just another crime to add to this ever-growing list. Yet the reason Republicans are not concerned with any of these actual scandals, of course, is because they support all of these policies. Foreign policy is the area in which both dominant U.S. political parties overwhelmingly agree.

Hillary Clinton was one of the leading voices in support of the disastrous war in Libya. In late 2011, the Washington Post indicated that Clinton was a "strong advocate" for and played a "pivotal role" in the NATO bombing. The Post noted that the "coalition air campaign has emerged as a foreign policy success for the Obama administration and its most famous Cabinet member, Secretary of State Hillary Rodham Clinton."

Clinton and the Obama administration may consider the bombing a "success," but try telling that to Libyans now fleeing a bloody civil war.

When Libyan dictator Mu'ammar Qadhafi was killed at the end of the NATO campaign in October 2011, Clinton, ever eager to flaunt her hawkish tendencies, infamously quipped "We came, we saw, he died." On her official website, Clinton still today boasts of the bipartisan consensus backing the Libya bombing, lifting up the military intervention that destroyed a north African country as a victory for her political record.

A small handful of voices were outspoken critics of the war effort. Both parties, for the most part, supported the bombing, yet leftists, anti-war activists, and figures like independent democratic socialist senator and current presidential candidate Bernie Sanders warned that the NATO intervention would be a disaster. History showed them to be correct: The NATO bombing of Libya has proven disastrous in virtually every single way. The situation on the ground today in Libya is nothing short of catastrophic. One does not need to defend Qadhafi's dictatorship to recognize this.

Mu'ammar Qadhafi was repressive and corrupt. He brutally crushed all opposition and lived like a king, with access to billions upon billions of wealth. This, naturally, did not stop the soi-disant democratic West from supporting him. U.K. Prime Minister Tony Blair worked with the dictator to imprison Libyan dissidents. He penned letters to Qadhafi, writing "Dear Mu'ammar" and signed "Best wishes yours ever, Tony." Moreover, Qadhafi participated in the CIA's extraordinary rendition program, helping the U.S. detain and torture militants.

Yet NATO turned on Qadhafi, who, since the 1990s, had largely abandoned his former anti-imperialism, instead warming up to the Washington consensus and implementing large-scale neoliberal policies. But Qadhafi's rhetoric -- although often in contradiction with his actions -- was still fiery, and he had never become an obedient ally. It should not go unnoticed, too, that Libya sits on enormous oil reserves and, before the bombing, was one of the world's largest oil producers. It also has -- or, rather, had -- many billions of dollars in gold reserves.

In its bombing campaign, NATO did more than kill Qadhafi nevertheless; it destroyed the Libyan government. Parallels to the U.S. war in Iraq are constructive. As was the case in Iraq, the U.S. did not just overthrow the draconian Saddam Hussein; it completely dissolved his government. Al-Qaeda entered the country amid the mayhem and, now, large swaths of Iraq are controlled by ISIS.

In an interview with Vice, an Iraqi man lamented that the "worst thing America has done to Iraq and Iraqis is this: They made a dictator look like an angel, in comparison to what we have right now."

Similarly, as prominent Libyan activist Hend Amry put it, "Was life more stable under Gaddafi? Well, yes. Your head stays very still when a boot is pinning it to the ground." Later she added "now there are many boots instead of one."

Today, many of these many boots are extremist in nature. ISIS, Ansar al-Sharia, and other Salafi groups are carving out parts of Libya through vicious violence and even ethnic cleansing.

Where is the widespread outrage over this, the real Bengahzi scandal? It is not to be heard in the halls of Capitol Hill, because handing the Middle East over to extremist groups has, whether wittingly or not, been U.S. bipartisan policy now for decades.

Where are the hearings on this, the real Benghazi scandal? There never will be one, because such a hearing would have to be overseen not by Chairman Gowdy, but rather by Chairman Chomsky.

Where are the several official inquires into this, the real Benghazi scandal? They will not be conducted, because, to the U.S. political establishment, the tragic deaths of four Americans is worth infinitely more attention than the deaths of thousands of Libyans and the destruction of a country.