Obama's stunning reversal on standardized testing: Why his latest comments could spell doom for "reformers"

The president came out last weekend against the overemphasis on testing, breaking with 20 years of precedent 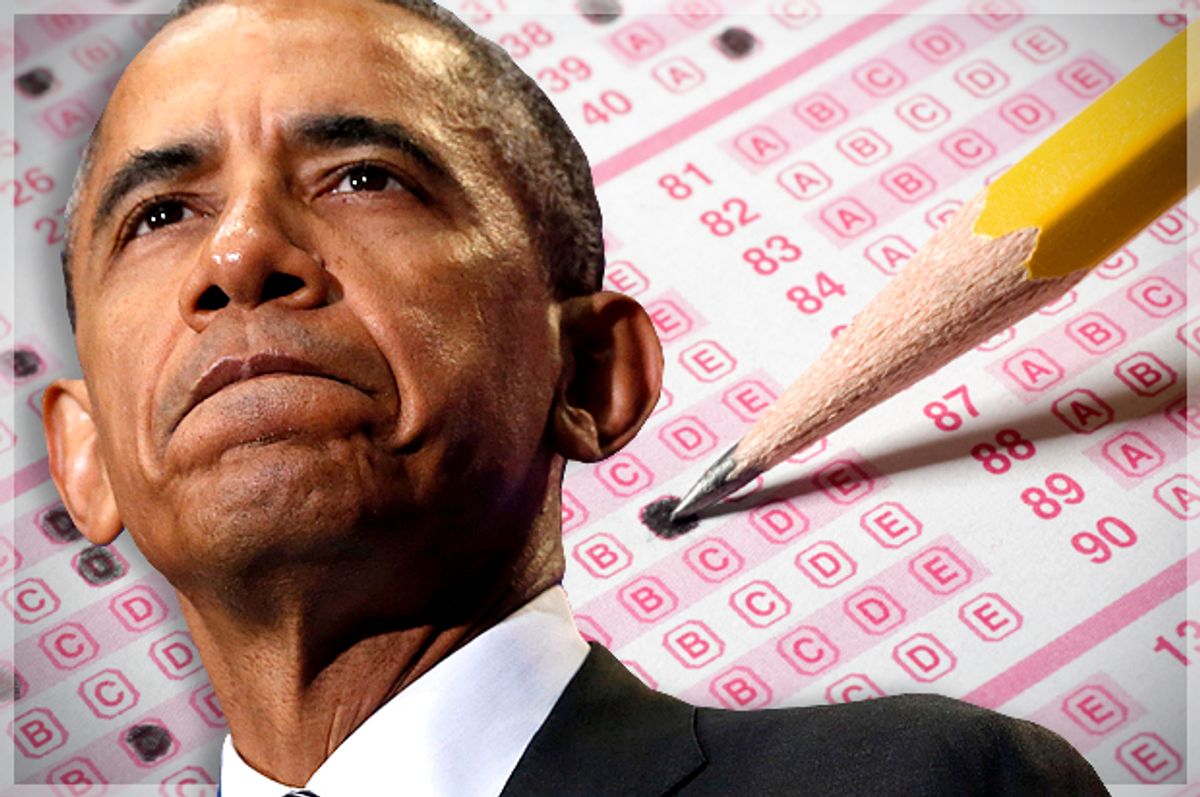 The activist/performance art group The Yes Men’s signature technique is to impersonate corporations or governmental agencies. They’ve posed as representatives from Dow Chemical, offering to liquidate their company and distribute funds to victims of the Bhopal disaster, or as officials from the Department of Housing and Urban Development, announcing the reopening of public housing in New Orleans after Hurricane Katrina. Through these hoaxes, the Yes Men publicize destructive policies and picture a world where they can be reversed.

That’s what I had in mind when I read that the Obama Administration called for a cap on standardized testing of no more than 2 percent of classroom instruction time, acknowledging their own role in endorsing a culture of constant test-taking. I simply assumed that The Yes Men had struck again, spoofing the Administration and calling attention to their education reform policies.

But that wasn’t an impersonator but President Obama himself saying that “learning is about so much more than filling in the right bubble,” and that it “takes the joy out of teaching and learning.”

Rigorous testing was so fundamental to the Obama Administration’s education reform agenda that this repudiation resembles shutting down Obamacare or the EPA’s carbon pollution regulations. Leveraged by Education Department policies like Race to the Top, which trickled out conditional funding, more states evaluated its teachers by factoring in test scores, and incorporated additional tests through the new Common Core standards.

As a result, teachers spent more and more of their school days preparing their classes to fill out Scan-Tron sheets, and less time on more rewarding pursuits like teaching critical thinking or triggering long-lasting interests. According to a survey of 66 districts by the Council on the Great City Schools, students now take an average of 112 required standardized tests between kindergarten and 12th grade, or over eight and a half every year.

Many of these tests fulfill federal mandates, from Race to the Top to the No Child Left Behind to Common Core. Eighth-grade students exceeded the Administration’s proposed limit of 2 percent of instruction time per year just on testing, to say nothing of the time spent teaching to the tests.

Most important, none of this testing appears to achieve the goal of creating more knowledgeable students. The Council on the Great City Schools study found no relationship between testing and reading and math scores on the annual National Assessment of Educational Progress (NAEP) between fourth and eighth grade. The tests do more to help administrators' claim that they are demanding “strong standards” than they do to actually instruct children.

What’s the other byproduct of excessive testing? Financial windfalls for the four private companies who create and administer the tests: Pearson, Educational Testing Service, Houghton Mifflin Harcourt and McGraw-Hill. These four firms have spent over $20 million lobbying the government between 2009 and 2014, insisting on more testing to boost their profits, according to the Center for Media and Democracy think tank. The testing sector generates $2 billion in annual revenue, so the return on investment is excellent.

Companies like Pearson work the states for lucrative testing contracts as well, but the tone at the top – mandating multiple overlapping assessments to determine student instruction levels and weed out bad teachers – provided a boost to their bottom lines. The testing trend was in part a money grab.

The Obama Administration finally admitting that their zeal for testing went too far breaks with 20 years of precedent, including nearly seven years’ worth of their own actions. Part of this is the backlash to Common Core from both the left and the right. Parents initiated the growing “opt-out movement,” where students choose not to take standardized tests. And this undercurrent of discontent has driven the tremendous shortage of available teachers, who weren’t interested in a career as an easily demonized vessel for imparting the mechanized business of rote memorization.

The Education Department’s resulting Testing Action Plan is rather vague. It states that standardized tests must be “worth taking,” time-limited to allow for critical instruction time and just one among multiple measures of how students are learning. They vow to work with school districts and states to realize these goals and “develop innovative assessments,” though the proposed annual funding level of $403 million is pretty small. And there’s talk of flexibility with federal mandates, which will likely be tweaked further with the reauthorization of the Elementary and Secondary Education Act, scheduled for this year.

Some have criticized the Administration’s plan for hiding behind buzzwords like “innovative assessments” as a Trojan horse for yet more corporate-influenced education, including perhaps online-based learning administered by for-profit companies. Certainly there’s no linking of a reduction in testing to measures that actually develop and improve the whole child, like the increasing proliferation of what Demos’ Matt Bruenig calls “welfare schools,” which recognize that providing services like meals, clothing, health care and more does as much to influence a poor child’s trajectory as in-classroom activities.

But as a first step to acknowledging the harms of over-testing, and the stress it causes school districts, teachers and students, I’ll take it. Education “reformers” made a few companies rich through the testing craze, but accomplished little else. While some are already reacting to this retreat by warning of the “unintended consequences” of capping testing, their vision of a constantly prodded and poked child, monitored incessantly for whether they can ace a multiple-choice exam without any understanding of whether they can think clearly and coherently, is coming to an end. A renewed focus on giving children the resources they need to succeed, instead of trying to assess, minute-by-minute, whether they are failing, would be a welcome approach. And it didn’t even take The Yes Men to get policymakers to come to their senses.