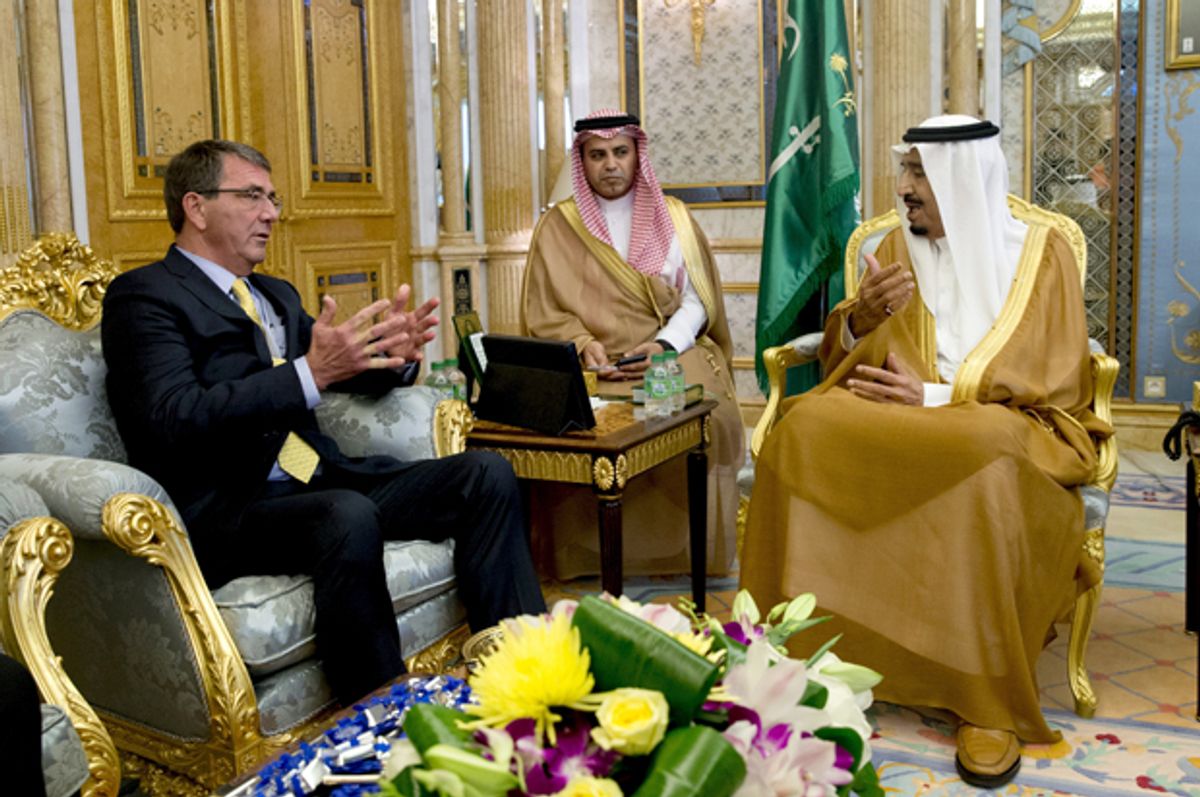 Saudi prince Abdel Mohsen bin Walid bin Abdulaziz was caught in an airport in Lebanon on Monday with over two tons of drugs.

Lebanese security found 40 suitcases full of more than 4,000 pounds of amphetamine pills and cocaine on the prince's private plane, which was on its way to Saudi capital city Riyadh. A security source told AFP that this was the largest smuggling operation ever foiled by Beirut International Airport security.

While this may seem like just another case of rich and powerful aristocrats going wild, the implications of this drug bust are much more insidious: In Saudi Arabia, people are executed over drugs. And not rarely -- several times a month, on average.

In fact, just hours after the Saudi prince was caught with thousands of pounds of drugs, a Pakistani drug smuggler was executed by the Saudi government.

Roughly half (47 percent) of people executed in Saudi Arabia are killed for drug-related offenses, according to Amnesty International. From August 2014 to August 2015, Amnesty documented 175 Saudi executions, an average of one every two days.

Every four days then, on average, the Saudi government executes someone for drug-related offenses -- while its own princes are caught in airports with tons of drugs.

Although an extremist theocratic absolute monarchy in which women are not granted equal rights, Saudi Arabia -- which has the world's second-largest proven oil reserves -- is a close Western ally.

When the Saudi regime was appointed to be the head of a U.N. Human Rights Council panel last month, the U.S. State Department said it "welcomed" the news, happily adding "we're close allies."

The Saudi regime officially has the world's third-highest execution rate, after China and Iran. Yet China has almost 50 times more people, and Iran's population is roughly three times that of Saudi Arabia.

Beheading is the most common form of execution in the kingdom. Firing squads are not uncommon either.

Equally hypocritical are the standards by which the Saudi royal family are treated. Abdel Mohsen is by no means the first prince to be caught up in controversy. Mere days before he was caught in Lebanon, female staffers at a Beverly Hills mansion filed a lawsuit against another Saudi prince, Majid bin Abdullah bin Abdulaziz al-Saud, accusing him of sexually abusing them and using illegal drugs. Staffers say the prince, who was doing cocaine and heavily drinking -- another illegal activity in Saudi Arabia -- ordered them all to strip naked, while uttering "I am a prince and I do what I want." They also say the prince engaged in homosexual sex, which is punishable by death in the Saudi regime.

The Saudi royal family is infamous for its decadence. These two recent cases are not isolated. WikiLeaks cables show that Saudi princes regularly throw opulent parties inundated with alcohol, drugs, and sex, while the totalitarian religious police turn a blind eye to their felonious activities.

Saudi royalty live by a completely different set of rules -- while the rest of the population lives under a ruthlessly violent Western-backed feudal dictatorship, in which they can and will be executed for stepping out of line.