The Obama administration's war over Black Lives Matter: What's really behind their fight over criminal (in)justice

Just underneath the surface, the president and his FBI chief are battling over criminal justice reform 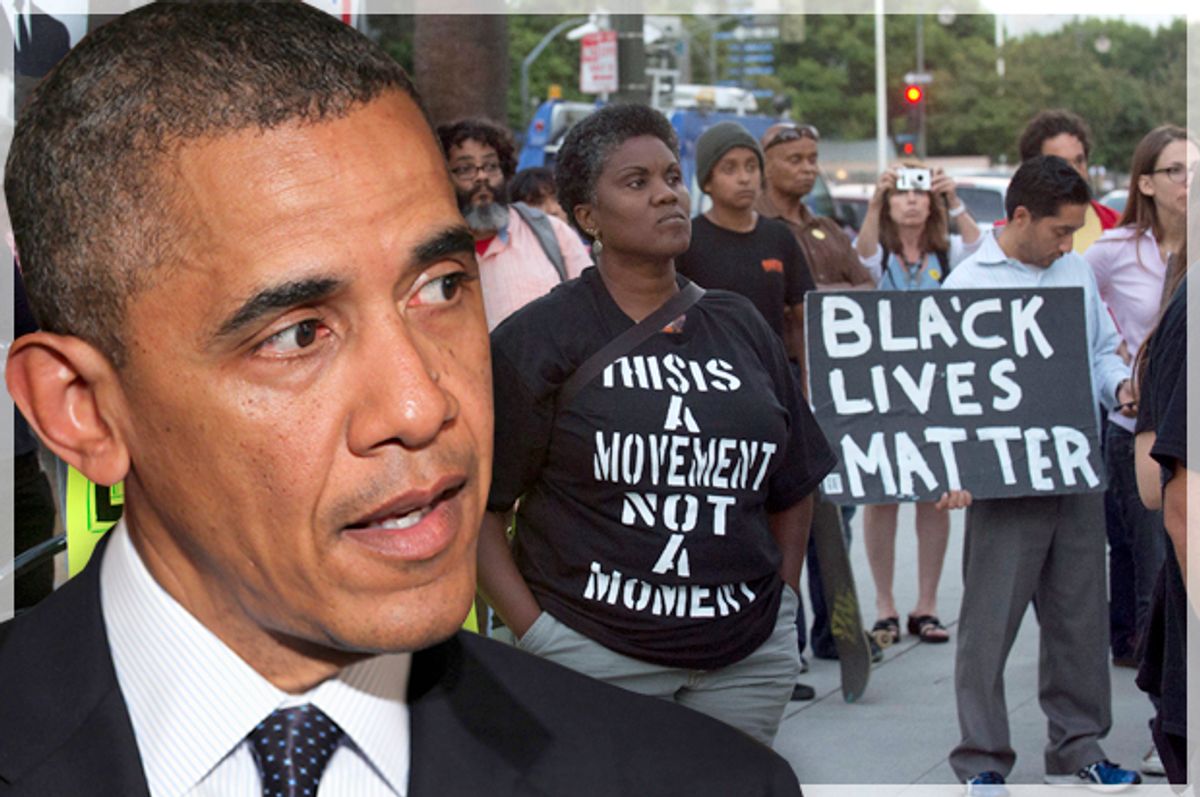 Over the weekend, FBI Director James Comey gave a speech in which he “lent the prestige” of the bureau to the controversial “Ferguson effect” theory, which posits that violent crime is increasing and that public criticism of law enforcement practices is to blame.

“I don’t know whether that explains it entirely,” Comey said, referring to the idea that cops are holding back for fear of becoming the next Darren Wilson, “but I do have a strong sense that some part of the explanation is a chill [sic] wind that has blown through American law enforcement over the last year.” He admitted he had no data to back up either claim (there is no consensus on violent crime increasing, much less its cause) but warned that the threat of “viral videos” was affecting the police.

According to the New York Times, Comey’s remarks were neither expected nor welcomed by some “at the top levels” of the Department of Justice, which has recently made a much-publicized effort to rein in abusive law enforcement practices and protect civil liberties. And Comey wasn’t just going against faceless bureaucrats in the DOJ. Intentionally or not, he was also disagreeing with the most prominent and recognizable member of the federal government: The president of the United States.

Indeed, here’s what President Obama had said during a White House panel discussion on criminal justice reform, which was moderated by the Marshall Project’s Bill Keller just a few days before Comey shared his hot take:

[W]e have seen incredible, historic reductions in crime over the last 20 years. I know that there’s been some talk in the press about spikes that are happening this year relative to last year, and I’ve asked my team to look very carefully at it … and it does look like there are a handful of cities where we’re seeing higher-than-normal spikes. Across the 93 or 95 top cities, it’s very hard to distinguish anything statistically meaningful.

This warning against overreacting to an uptick in violent crime in some cities wasn’t a tossed-off aside from the president, either. It was clearly one of the main points he wanted his audience and the rest of the country to take away from the discussion. Which is why he returned to it once more before the panel had finished:

All this talk that’s getting hyped about this huge spike in violent crime, this is where you have to step back and say, all right, let’s understand statistics. 2014 was a historic low in violent crime. So if there’s a spike in some cities, that’s something we have to take seriously and pay attention to; but that doesn’t automatically suddenly translate into this notion that a crime wave is coming … And that’s an example of us having to make sure that we’re not being driven by fear or bias in how we approach this problem.

Now, I obviously can't speak for Comey; so when I say that the FBI director's comments were intended to be taken as a kind of executive branch subtweet, I'm engaging in nothing more (or less) than informed speculation. But still, doesn't it seem unlikely that the head of the FBI would be unaware of what the president, who is technically his boss, said during a relatively high-profile discussion on criminal justice? I certainly think so.

In fairness, Obama's request that we not miss the forest for the trees does not directly clash with what Comey said soon thereafter. The president was talking about overall statistical trends, whereas Comey was discussing the behavior of police, specifically. But if there isn't a real increase in crime, then the "Ferguson effect" becomes irrelevant. It'd be the explanation of a problem that does not exist. By signing on to the theory, Comey implicitly endorses the idea that crime is up, too.

More importantly, Comey's remarks should be seen as a not-so-subtle rebuke of the Black Lives Matter movement, which Republicans — especially those ones running for president — are increasingly coming to demonize. By suggesting that law enforcement has effectively been hand-tied by heightened public scrutiny, Comey is implicitly endorsing the idea that the practices Black Lives Matter opposes (stop and frisk, in particular, and "aggressive" policing, in general) are necessary to maintain the peace.

Once again, he's diverging from the president. Obama has not explicitly endorsed Black Lives Matter. But most people have assumed that he supports their goals — broadly defined, at least. And while Obama was sure to note that "some people" associated with BLM "pop-off and say dumb things," he emphasized that this was an inevitability when a movement is organized "loosely," as is the case for BLM. In fact, he went one step further, defending the "black lives matter" slogan, which has become something of a proxy for the movement overall:

I think the reason that the organizers used the phrase “Black lives matter” was not because they said they were suggesting nobody else’s lives matter; rather, what they were suggesting was there is a specific problem that is happening in the African-American community that’s not happening in other communities. And that is a legitimate issue that we’ve got to address ... we as a society, particularly given our history, have to take this seriously. And one of the ways of avoiding the politics of this and losing the moment is everybody just stepping back for a second and understanding that the African-American community is not just making this up, and it’s not just something being politicized; it’s real and there’s a history behind it.

To be blunt, these are not the words of a man who is likely to sympathize with the theory behind the "Ferguson effect."

So what's the lesson to be gleaned from Comey's pushback? To some degree, we should remember that although the president is the head of the executive branch, he is not king. The federal government is a large, complicated entity; and there are no doubt many rank-and-file bureaucrats within it who disagree with the president, fundamentally. Within the FBI, especially, it's easy to imagine that a significant cohort looks on our former community organizer president with skepticism. And Comey can't afford to alienate them.

That said, it's also important to remember that Comey is a conservative Republican, one whose claim to fame was losing a power struggle to Vice President Cheney during George W. Bush's first term. It's likely, in other words, that he genuinely sympathizes with the "law-and-order" mindset more than that of Black Lives Matter. So while there are benefits to placing someone from the other party in a plum spot within your administration, there are, as Obama has found out, drawbacks as well.

Perhaps most significantly, though, we should treat the Comey episode as a reminder of just how entrenched is the current criminal justice status quo. As I've written previously, the case for the "Ferguson effect" is exceptionally flimsy. In some respects, the fact that it's gained as much traction as it has is more revealing than anything else. When it comes to defending law enforcement, the bar is still set exceedingly low. And when it comes to protecting African-Americans' civil liberties, the bar is still sky-high.