"It felt like the bullsh*t was flowing directly at us": Morgan Spurlock turns fact-checking the outrageous GOP debate into a game 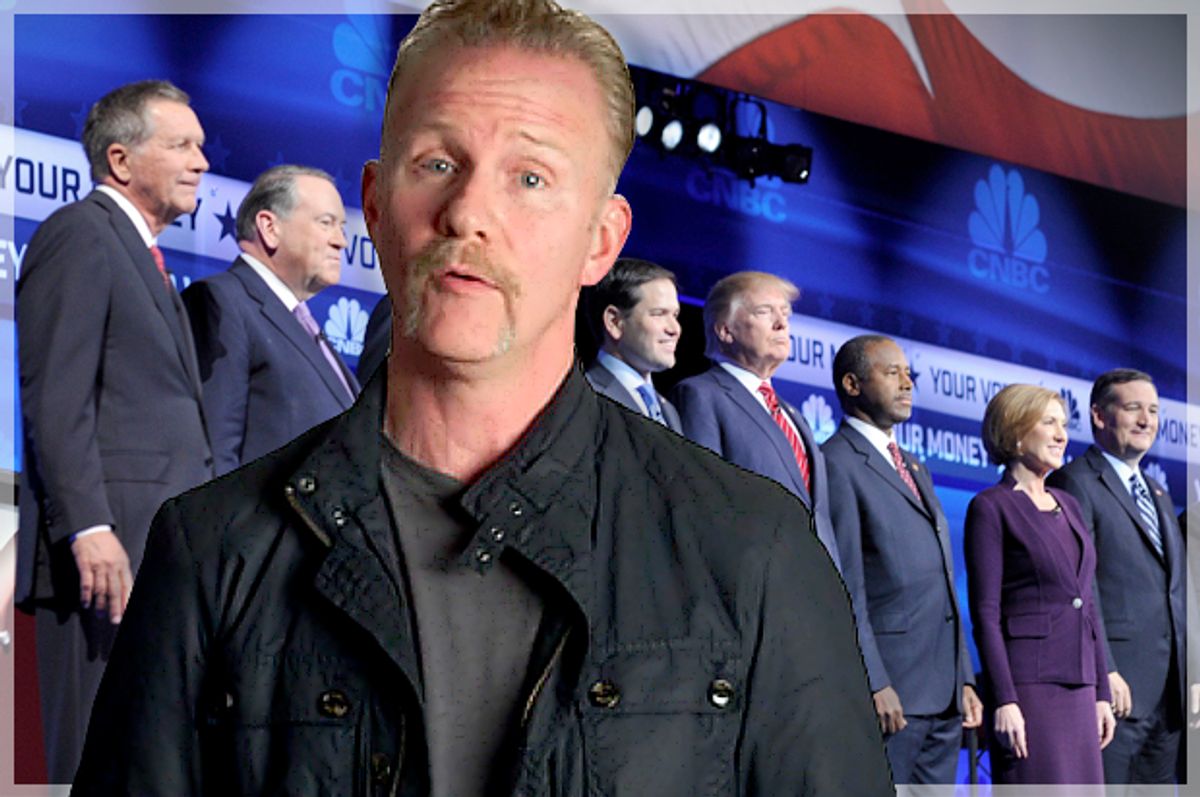 Is Donald Trump really funding his own campaign? Did he ever file for bankruptcy? Does Ben Carson have any relationship to dodgy nutritional-supplements company Mannatech? Will his flat tax stimulate the economy? Does the Federal Reserve need to be audited?

These are some of the questions batted around last night at the Republican debate on CNBC. They’re also elements of an interactive video that documentary filmmaker and general trouble-maker Morgan Spurlock has put together to highlight the number of lies and half-truth being tossed around in politics today. The video – "Call Bullsh#t" – helps sort out the truth behind the claims and should be of interest to fans of the Jon Stewart-era “Daily Show.” (It was put together in collaboration with the video production company Interlude.)

We spoke to Spurlock and Jeremy Chilnick, COO of Spurlock’s production company, Warrior Poets, from New York. The interviews have been lightly edited for clarity.

Politicians have been lying or shading the truth for hundreds, maybe thousands of years. Why did this seem like the right time for a fact-checking video?

Spurlock: I feel like throughout history we’ve heard bullshit from politicians, but now we’re at the perfect intersection of technology and entertainment where we can, in real time, produce something that holds people accountable. That’s an exciting time to be living in.

Chilnick: Morgan and I, and Interlude, are very interested in politics and interactive storytelling. From the moment we saw the last Republican debate – how audacious it was – it seemed like the perfect time to launch this.

Has the lying, the deception, gotten worse over the years?

Spurlock: I don’t know if it’s gotten worse – there are just a lot more places where it can be amplified. I think it’s probably been consistent. But now there’s more places to tweet about it or Facebook about it, broadcast it – there are more people picking [misinformation] up. But the harder part is that there are not as many people calling it out.

We wanted to engage people in this election, and do it in a way infinitely more entertaining than just watching it and talking about it.

Did this debate seem as full of deceptions as that awful second debate?

Spurlock: It was a lot shorter. It limited the amount of bullshit to half, because it was half as long time-wise. But I feel like it was a little bit more reigned in. Some candidates has a specific purpose in mind, others were trying to clamor and get attention.

Does it make sense to do this for the Democratic debate, or is this something that only Republicans deserve?

Chilnick: There there were so many candidates onstage – it was an arena atmosphere, everyone was trying to outdo everyone else. It created a perfect storm of bullshit.

Spurlock: But I’ve already been contacted by so many people saying, “I didn’t see Hillary or Bernie in this video.” Hillary and Bernie weren’t in the debate. But there are already people itching for the Democrat version.

Did one of the candidates seem to stay closer to the truth, and another stretch out into falsehood more often?

Spurlock: Marco Rubio was doing everything he could to stand out. So did Chris Christie. But they did it in very different ways.

Rubio was trying to be this team-builder on the Republican side. But Christie was still out for blood – he was playing the bullshit shark.

Or someone like Ben Carson – he’s in a position where he’s saying anything he can to get elected. He was full of bullshit last night – it was great.

Chilnick: Marco Rubio did seem to be the most honest, came across as the most level-headed, and connected at the most human level.

On the flip side of that, Chris Christie seemed to be seizing every moment to really demonstrate that he was still in the race. That need to justify himself as a candidate led to hyperbole and outright bullshitting – the way he was talking direct to the camera, ignoring the audience in the room. It felt like the bullshit was flowing directly at us when we were sitting in our room watching the TV — we were sort of ducking out of the way of the bullshit coming our way.

So you plan to keep this up through the Republican and Democratic debates?

Spurlock: That’s the plan. As long as everyone who worked 27 or 28 hours straight yesterday can go home and get some rest, and be enthusiastic about it, we can do it again.