The inane spectacle of the GOP debate: Cruz the showboating creep, Rubio the slick operator & Bush the desperate flop 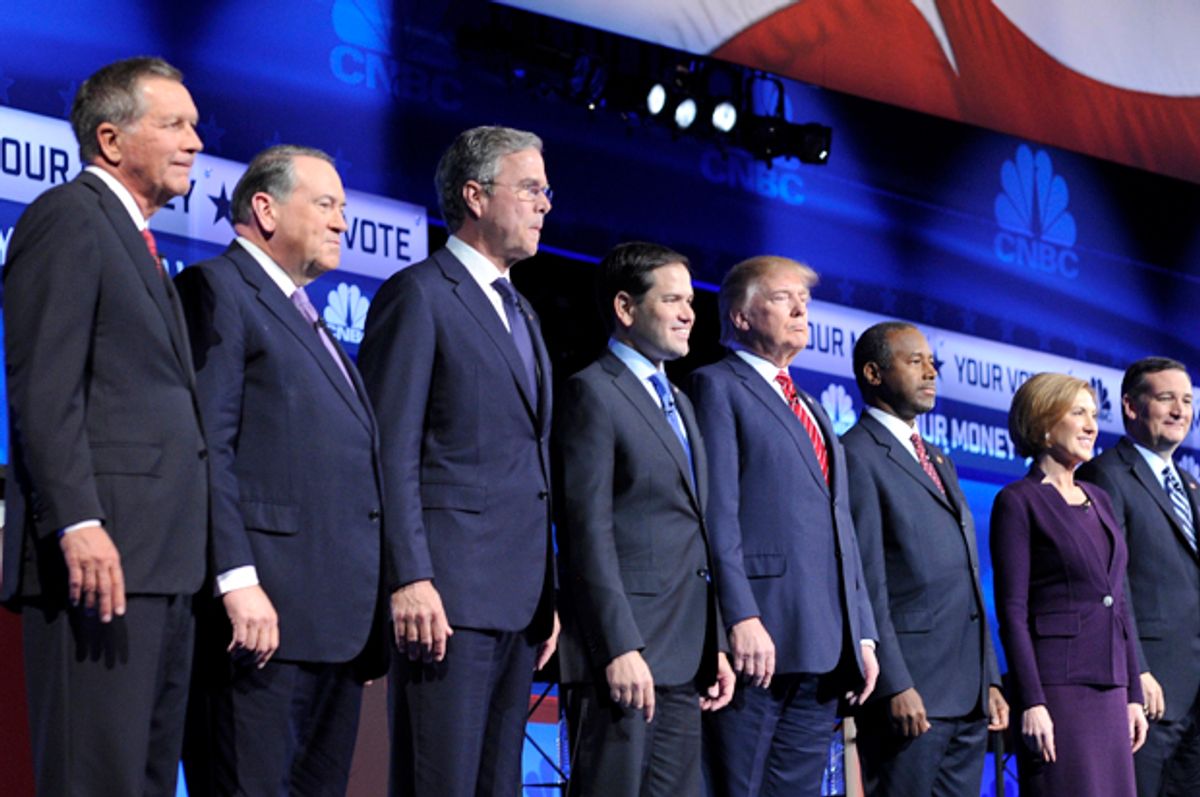 Last night's Republican presidential debate was interesting for all the wrong reasons. We learned little. The candidates evaded the toughest questions. Moderators failed to challenge fact-free answers. And the dynamics didn't change.

What happened was less a debate among contenders and more a showdown between the candidates and the moderators. Everyone attacked the moderators when they heard a question they didn’t like, and then made a show of their rebelliousness - this was great for anti-media conservatives, but a distraction for everyone else. The moderators had their moments, but they were mostly awful. Frivolous questions about Rubio’s absenteeism or Trump’s “moral character” or fantasy football gave the candidates just enough fodder to avoid answering the hard questions whenever they were asked. The result of all this was two and a half hours of political gas.

It’s hard to say whether Trump did well or poorly. His shtick almost defies analysis. I expected him to come out swinging, but he didn’t do that, despite being surrounded by low-energy losers.

He had a few moments, though. He reminded everyone of his plans to build a "big, beautiful wall" on the Southern border, but making sure to note that he'll add a door right in the middle, so Mexicans can walk in “legally.” When John Harwood cited a few inconvenient facts about his tax plan, he ignored them and boasted that right-wing economist and CNBC commentator Larry Kudlow likes it - that settled the dispute. At some point Trump was asked about guns. "I do carry occasionally," he said. "Sometimes a lot. I like to be unpredictable, so people don't know I'm carrying." Also, he'd feel "safer" if his employees (all of them) carried guns at work.

Bottom line: Trump held his ground. He was vulnerable tonight, particularly after slipping in the national polls this week, but he avoided any direct attacks. As a frontrunner, that’s all he needed to do.

I’m tempted to say Carson failed tonight, but that’s not really true. Tonight was a win for Carson. He’s now a legitimate frontrunner, having overtaken Trump in the latest CBS/NYT poll. He’s also leading in Iowa by a wide margin. I assumed the other candidates would go after him, but they didn’t, with the exception of John Kasich's brief jibe at Carson's simplistic, tithing-inspired tax plan.

By and large, Carson's rivals allowed him to continue his nice guy routine. He avoided specifics and he pivoted from question to platitude faster than anyone else on that stage. He uttered phrases like I “hate the concept of regulations, because they’re in everything,” but no one pointed out how stupid that is. I thought he’d have to defend his recent gaffes (i.e. equating women who have abortions to slaveholders) but they weren’t even mentioned. The most important thing for Carson: He escaped another debate without explaining any of his policies or admitting that he doesn’t understand half the questions – that's a victory.

Jeb was the big loser tonight. He had the most at stake and he did nothing to help himself. His campaign is collapsing, his poll numbers are falling, and his donors are panicking. His only goal tonight was to plug the leak, to convince his financiers that he’s still a good investment. He failed to do that. In addition to fending off Trump, Jeb had to damage Rubio, who is quickly becoming the establishment guy. But he couldn’t do it, because he’s a terrible candidate and nothing he says or does works in this campaign. He almost succeeded at demonstrating his regular guyness when he referenced his fantasy football record (he's 7-0), but even that felt unnatural and canned. More than anyone else, Jed needed a boost tonight. He needed to be seen as strong and presidential. None of that happened. He was low-energy, basically.

Tonight was an opportunity for Rubio. He’s rising in the polls and he needed to capitalize on his momentum. I thought he did that. There were no obviously bad moments for him. And he managed to avoid taking any direct hits, including from Jeb and the two frontrunners. Even his dumb answers were received well. When asked about his greatest weakness, he said he loves America too much. When asked why he never shows up for work at the Senate, he said it’s because America needs him. And the audience loved it. I suspect he’ll become the preferred establishment alternative to Bush, if he isn't already. Rubio's young, polished and reasonable-sounding enough to be competitive in a general election. He can't beat Hillary, but he may be the best shot they have.

I thought Fiorina’s political star was fading before the debate. Nothing tonight changed my opinion. After rising to third in the polls after the first two debates, Fiorina has dipped well below Rubio and Bush. Her strategy so far has been to repeat lies over and over again until they become true. She did that again tonight, particularly on her record as CEO of Hewlett-Packard, which is disastrous. She said something about reforming the tax code by reducing it to three pages, so that farmers could understand it - still not sure if that's a good thing. She almost had one of her contrived moments when she attacked Hillary Clinton's feminist credentials. "It is the height of hypocrisy for Hillary Clinton to talk about being the first woman president," she said, "When every single policy she espouses...has been bad for women." She didn't name a single one of those policies, though, and no one asked.

Bottom line: Fiorina said nothing tonight she hasn’t said before. Her window has closed. She'll be out of the race in a few months.

There’s not much to say about Rand Paul. He was a non-factor before the debate and he’ll be a non-factor after the debate. Paul’s only chance in this race was to excite the libertarian wing of the Republican Party. He hasn’t been able to do that, though I’m not sure why. He did reasonably well tonight, but no one will notice. Paul just doesn’t matter at this point. He was mostly an afterthought until the end of the debate, when he said something about liberty thriving when a government is so small that you can’t see it. I doubt that insight will resuscitate his campaign. But he's got a big filibuster coming up, so that ought to keep him in the headlines for a little longer.

Ted Cruz is impossible to ignore. He’s creepy and awkward and deeply annoying, but he just won’t go away. As expected, he did well tonight. At the beginning of the debate, he confessed that his greatest weakness is his love of the constitution (What else could it be?). He also said something about driving people (drunk people, I think) home at the end of the night, which wasn’t weird at all. All told, tonight was a win for Cruz. He pandered to his religious base and performed his rehearsed speeches with characteristic flair. He even took a few jabs at the media, which conservatives absolutely love. I doubt he gets a boost in the polls, but he definitely didn’t hurt himself tonight. So long as he's got the evangelical and Tea party demographics cornered, Cruz has staying power.

There isn’t much to say about Huckabee. If he wasn’t selling books or angling for a TV show, I imagine he would’ve dropped out of the race a long time ago. He said nothing new or interesting tonight. In fact, he barely spoke at all, and when he did it was brief and immediately forgettable. He was at the bottom of the polls before the debate, and that’s where he’ll be tomorrow.

Kasich continues to be one of the more interesting candidates in the race. His strategy has been to remain the sensible, moderate guy, the one who can appeal to centrists and moderates in a general election. He’s been more aggressive lately, however. I expected him to be in attack mode tonight, because he needs to do something to break through, but he was fairly cautious. Tonight he tried to distinguish himself as the only candidate who’s pragmatic enough to get things done in Washington. But this has been his approach from the very beginning. It hasn’t worked so far and I doubt it will now.

Christie did well tonight, but it wasn’t enough. His tough guy routine hasn’t been as effective with Trump on the stage, so his strategy was to attack the moderators rather than his fellow candidates. Basically, every Christie statement was a variation of the phrase: “We’re talking about X when we should be talking about Y!” That’s it. He also said we have to be honest with old people and just tell them the truth, which is that “the government lied to you and stole your money” and you’ll “never see it again.” I’m not sure what to make of that, so I’ll just leave it right there. Something tells me Christie will hang around for a while, but he's got no chance to win this thing.