Never tell a woman to "smile": An earnest plea to the good men to sit down, shut up and listen

Not being that jerk who whistles at women is not enough. All men have a responsibility to fight street harassment 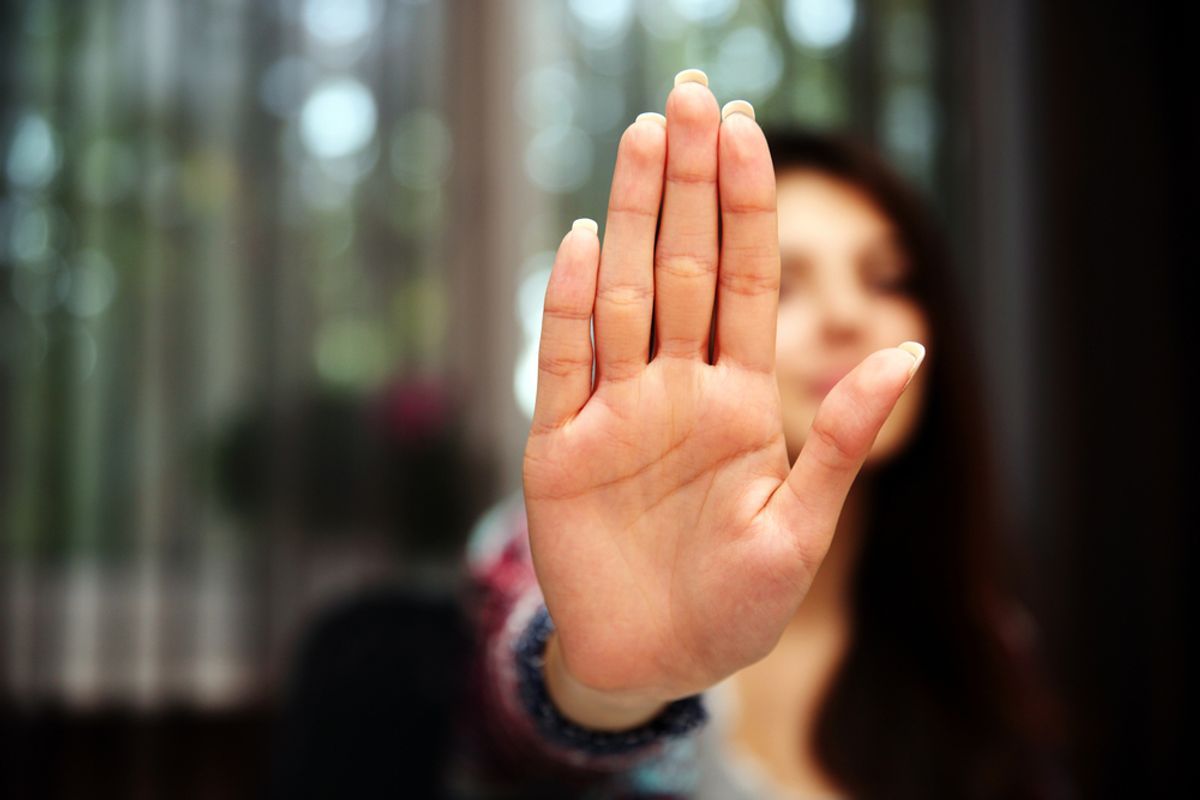 A woman waits at the bus stop, having just received some bad news. A man tells her to smile because she's "too pretty not to."

A man walks close to a woman on the street and whispers to her, "I like those legs."

As I walk to the train station, a man says in my ear, “Be careful how you dress. There’s a rapist out here.”

These are only a few of the countless experiences of harassment that make up women’s everyday lives. I could tell you a few things that men have said to me on the street that made me feel dirty, unsafe, and like a piece of meat. But my experience with sexism and harassment does not merely exist in a few anecdotes—it is interwoven with my entire reality as a person. Just as it is for most women. This is what led me to create my street art series Stop Telling Women to Smile -- not just one particularly bad experience but the threat of street harassment, from microaggressions to physical assault, that I face every day.

Even though these incidents happen in public, they still feel like private moments of vulnerability. By bringing them into the light, I’m trying to change the way we think about this problem—not as a private issue that falls to women to solve but as a public one for which we all share responsibility.

Public awareness of street harassment seems to be growing, especially online, and the Twitter hashtags #YesAllWomen and #YouOKSis have sprung up as places for women to share stories and offer support. As more women are voicing their experiences, men need to learn how to respond—because right now responses often shift the conversation back to a dynamic that normalizes catcalling and silences women.

Even well-meaning men participate in dialogue that centers their own interests and perpetuates male dominance. When I tell men about my project, they often ask, “Well, how should I approach a woman I find attractive on the street?” glossing over women’s experiences and jumping to the conversation that benefits them. When this happens, I sometimes wonder if men understand what I’m talking about, if they know what it feels like to have someone hiss at you like a dog or grope you on the train. But they do not. Male privilege affords them the freedom not to. The reality of moving through public space is drastically different for men and women.

Instead of trying to speak with authority about an oppression they have not experienced, men should participate in the public discourse on gender-based street harassment by thinking about how they are complicit in a society that allows this to happen and figuring out what they can do to help stop it. They can begin by listening to women when they talk about what they go through and believing them.

It’s arrogant to tell marginalized people that what they experience is not real or valid. Yet a man will often attempt to dominate a conversation about a woman’s experience in order to promote his own opinions or interests. Don’t. Have a seat.

Even as one who experiences the exaggerated amount of abuse that black women receive, I too have to take a seat when others tell their stories. I am cis and able-bodied. I’m not subject to the same threat of violence that trans women face or to the specific kinds of abuse that young women, fat women, Native women or women with disabilities receive. When I talk with other women, I have a seat, I listen to them, and I believe them. When those who are less privileged than you tell you about how their identity leads others to abuse them, don’t get defensive; try searching for empathy and consider how you might be contributing to that abuse yourself.

Maybe you have never catcalled a woman on the street. But maybe you have witnessed it and not intervened. Maybe you have excused the behavior by saying, “Men are just like that,” perpetuating the idea that manhood is defined by sexual aggression. Listen to women when they tell you about the times they were insulted by a man as punishment for not receiving his advances, and ask yourself if you’ve ever used the same language to or about a woman.

If so, check yourself. Check your friend when he uses language that is violent toward women. Step up when a man on the train hassles a woman. Interrupt your co-worker who’s going in for a rape joke. When you see an attractive woman on the street whom you might like to take on a date, remember that she might be exhausted and triggered by a slew of leers and catcalls and rethink how or whether you approach her.

Not being the jerk who yells at women or the creep who whistles at them does not exclude you from the problem. You have a responsibility. Listen to women, trust their realities, find your role and help create a society in which it is not acceptable for men to be violent toward women.