Inviting the debt apocalypse: GOP candidates freak out about the debt, and plan to make it worse

At the GOP debate, candidates sounded apocalyptic warnings about the debt, and backed tax plans that cost trillions 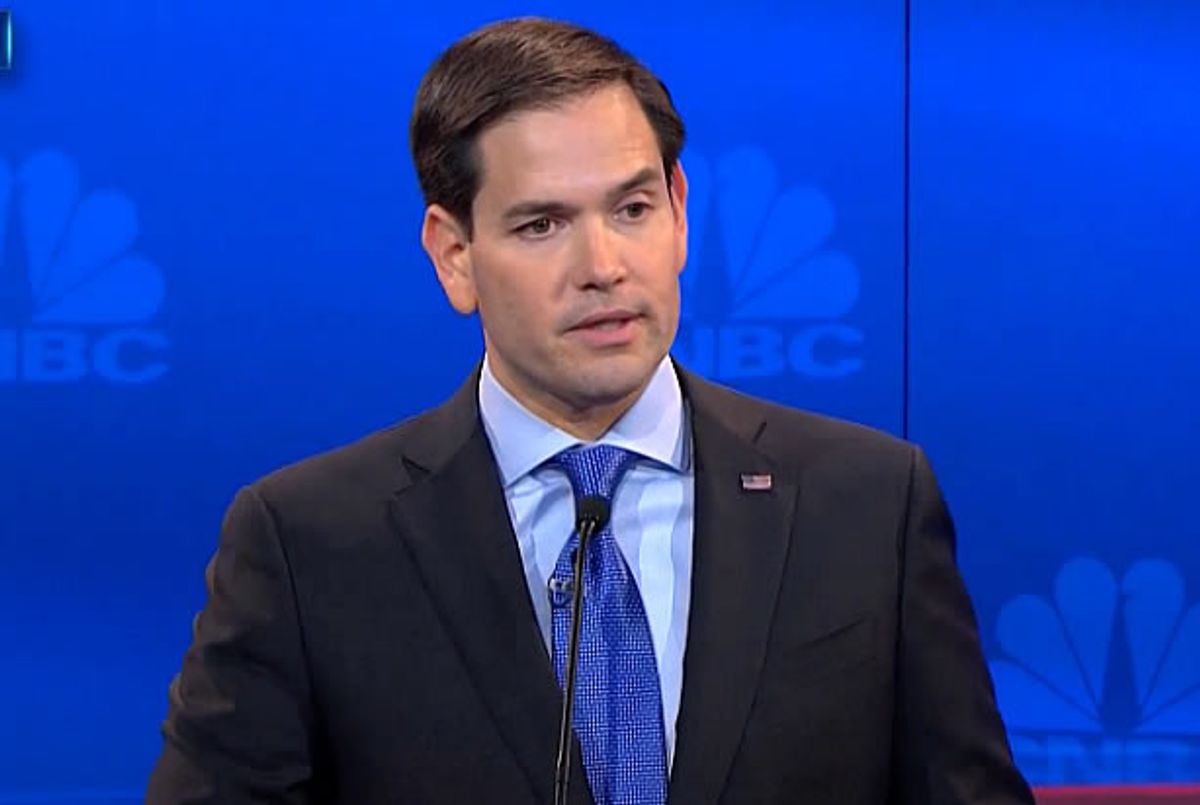 If one were to try and extract a theme from the churning morass of gibberish and nonsense that was this week’s Republican primary debate, it would probably be that the United States is at this moment on the brink of a catastrophic collapse. Our fragile existence, per the Republican candidates, is under threat from a variety of malicious forces, but the most pressing of them is The Debt, which is poised and ready to terminate the American experiment at literally any moment.

This theme was common to all the candidates, from the guns-and-God screamers to the allegedly electable “normals.” Marco Rubio, generally agreed upon as the winner of the debate, justified the impetuous and impatient nature of his candidacy by arguing that the country is on death’s door and needs saving now. “This country is running out of time,” he said. “We can’t afford to have another four years like the last eight years.” The crisis we’re facing, he said, is “a $19 trillion bipartisan debt,” and “if we don’t act now, we are going to be the first generation in American history that leaves our children worse off than ourselves.”

Rubio’s alarmism was heartily endorsed by New Jersey governor and serial comeback-haver Chris Christie, who erupted in totally spontaneous rage at the moderators after they asked a question about regulating fantasy sports websites. “Wait a second,” he righteously thundered, “we have $19 trillion in debt. We have people out of work. We have ISIS and al Qaeda attacking us. And we’re talking about fantasy football? Can we stop?” In his closing statement, Christie circled back to the debt, asking the audience: “Are you concerned like I am that the debt and deficits of Washington, D.C. are endangering America’s future?”

But the clear winner when it came to insane debt alarmism was Mike Huckabee, who conjured images of the grim post-debt-apocalypse hellscape that he and his grandchildren will be forced to navigate. “I’ve got five grandkids,” he folksed, “I do not want to walk my five grandkids through the charred remains of a once great country called America and say, ‘Here you go, $20 trillion dollars of debt. Good luck making something out of this mess.’” It was like “The Road,” but written by Ron Fournier.

Anyway, as Politico’s Michael Grunwald explained, the debt alarmism on display at the debate was part of a broader rejection of fiscal reality by pretty much every candidate. The federal deficit is going down thanks to a slowly improving economy and a series of ugly fights over tax hikes and spending cuts. And, as Grunwald writes, “the government still spends more than it takes in, and the national debt has grown to $18 trillion, but it has stabilized as a percentage of the economy.” So that’s pretty good news for Mike Huckabee’s grandkids.

But here’s the thing – while the Republican candidates were warning about the nation-ending threat posed by the allegedly out-of-control debt, they were also pushing tax proposals that would (pause for effect) dramatically increase the debt.

Let’s focus first on Marco Rubio, since he came out of the debate looking pretty good and also had a contentious exchange with moderator John Harwood about his tax plan. Rubio’s proposal calls for rate cuts on income and reducing the number of brackets, new tax credits for middle class families, and the complete elimination of taxes on capital gains and estates. Rubio insisted last night that this wildly regressive plan did not favor the wealthy – an assertion that is flatly untrue. With regard to its effect on the debt, the Tax Policy Center examined Rubio’s plan when it was first released earlier this year and it found:

They’ve proposed a tax reform that would add many trillions to the national debt over the next decade (a problem dynamic scoring is not likely to paper over). The Tax Policy Center estimated that an earlier, less ambitious version of the plan’s individual provisions would add $2.4 trillion to the debt. This plan would surely be even more expensive.

This is a common feature of most of the 2016 GOP candidates’ tax plans – they call for massive tax cuts on top earners, and they would (according to conservative estimates) cost more than $1 trillion dollars over the next decade, with some soaring as high as $10 trillion. And that’s just the cost of the tax cuts. Most of the candidates also want to dramatically increase defense spending from its current levels while also pursuing a balanced budget amendment to the Constitution. That means they want to decrease the debt while cutting taxes for the wealthy and increasing military spending while balancing the budget. The only way this math could conceivably work is if you put in place deep, ruinous cuts to entitlement programs and the social safety net – something no one endorsed on stage last night because it would be political suicide. None of this works, none of it makes sense, and yet it’s the position of pretty much every candidate for the Republican nomination.

There is an irreconcilable tension between the apocalyptic warning about the national debt and the candidates’ debt-exacerbating policies. By their own logic, the Republican candidates for president are hastening the demise of the United States of America.