Jeb Bush is sounding an awful lot like Rick Perry: An ominous echo, and why it matters

Jeb fancies himself a 2016 version of John McCain. Instead, he's looking like another failed GOP hopeful 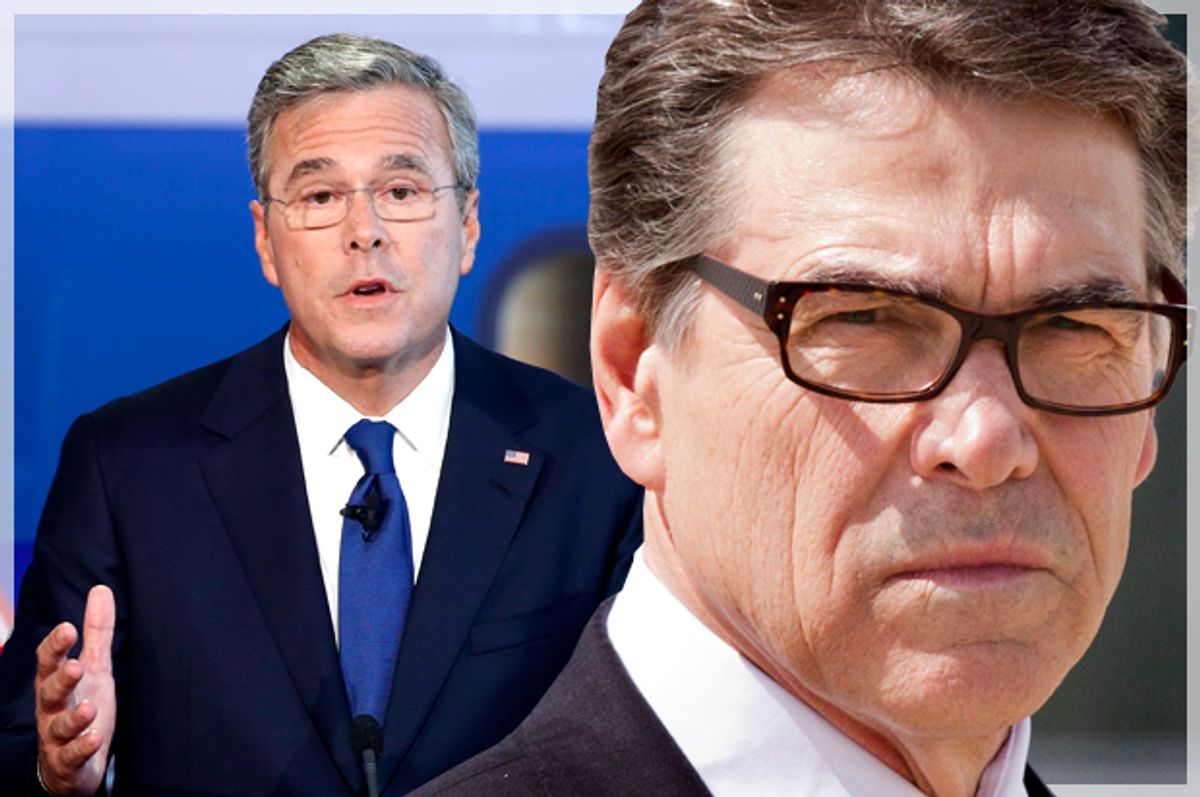 Fading in the polls and forced to make drastic cutbacks to his campaign staff, erstwhile GOP frontrunner Jeb Bush is attempting to rally the faithful by comparing his underdog bid to John McCain's return from the dead in 2008.

“This time, eight years ago, John McCain was traveling through the Atlanta airport. I saw him and he had no aide, no person, [he was] by himself because his campaign was supposed to be ended," Bush recalled last month. “He won the Republican primary that year. This is how the process works; you have to go earn it.”

While the Arizonan's phoenix-like comeback may offer Bush a flattering comparison, old McCain hands dispute the analogy. They note that even as he struggled in 2007, McCain remained popular in New Hampshire, where Bush now languishes, and that the Arizona senator also owned the Iraq surge, whereas Bush has yet to seize on a campaign-defining issue. And they point to yet another difference: McCain's chops as a communicator.

“The force of McCain’s message and personality and the debates, his ability to do well in the debates that fall, really helped,” operative Charlie Black told Politico for a piece that ran Tuesday, one day before yet another poor debate performance by Bush prompted a campaign death watch.

And it's that dismal performance that evokes not John McCain, but another past GOP hopeful -- and this comparison isn't nearly as favorable to Bush.

After failing to recall the third Cabinet department he'd proposed eliminating during a debate hosted by CNBC -- the network that broadcast this week's debate in Boulder -- then-Texas Gov. Rick Perry shrugged it off, arguing that voters would look to his record as governor, not his rhetorical prowess.

“No other candidate on that stage has the record that I have,” Perry said at the time. “Yep, there may be slicker candidates and there may be smoother debaters, but I know what I believe in. And I’m gonna stand on that belief every day. I will guide this country with a deep, deep rudder.”

“I wish I could talk as well as some of the people on the stage, the big personalities on the stage,” he said yesterday, speaking beneath a "Jeb Can Fix It" banner. “But I’m a doer.”

At this point, there's no reason to expect this tack to work out any better for Bush than it did for Perry. In a recent Pew Research Center poll, GOP voters said by a margin of 65 percent to 29 percent that they preferred fresh blood to a candidate with "experience and a proven record." That finding helps explain the rise of "outsider" candidates like Donald Trump, Ben Carson, and Carly Fiorina -- and it also casts doubt upon the likely success of the Bush campaign's attempts to portray leading establishment rival Marco Rubio as an inexperienced naif and a "risky bet."

Rubio, unlike Bush, brings deft rhetorical skills to bear. And for a party that wants to win the White House back after an eight-year hiatus, that won't be overlooked. After three lackluster debates and a series of gaffes on women's health, the Iraq War, Social Security, Medicare, and mass shootings, it's Bush who's looking like a risky bet for the establishment.