After yet another bad debate, Jeb is now forced to convince people simply that he still belongs in the race 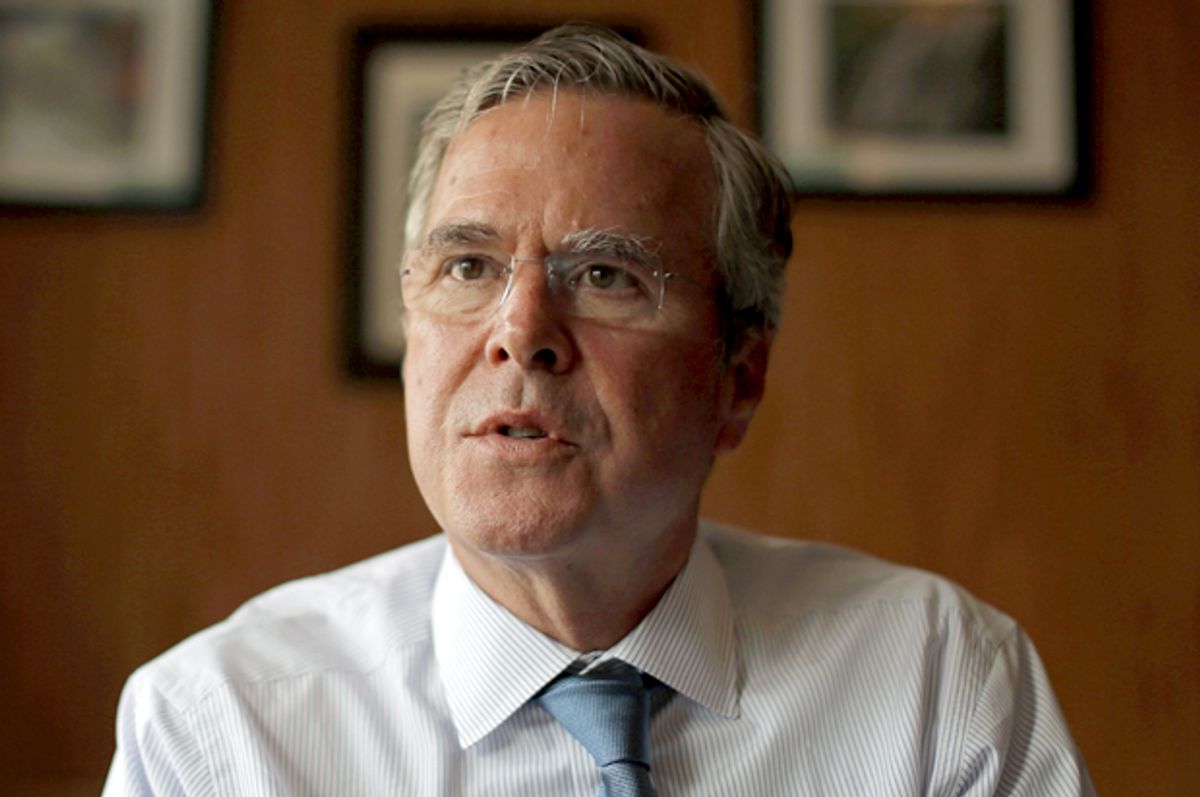 Jeb Bush is in a bad way. His presidential campaign was already wheezing badly heading into this week’s debate, and instead of turning in the strong performance he needed to calm restive donors and supporters, he got pantsed by Marco Rubio and then spent the rest of the evening quietly sulking. Before Wednesday night, Jeb was in “we can turn this around” mode. Since then he’s shifted to “justify my continued presence in the race” mode, which is impelling the campaign to do some desperate and stupid things.

Someone within Jeb’s campaign leaked to U.S. News’ David Catanese a massive strategy document detailing pretty much everything the Jeb! 2016 Campaign Experience has planned from here until the Iowa caucus. It has internal polling results from New Hampshire, planned advertising expenditures, an ambitious plan to force Iowa Republicans to like Jeb, and a detailed list of attack strategies to be deployed against Jeb-Pantser-in-Chief Marco Rubio.

I suppose the thinking behind this leak is to demonstrate that the campaign has a long-term strategy is isn’t just flailing about trying to gain traction. The dominant narrative is that Jeb’s campaign is falling apart, and so they feed this document to the press to show that they’re still doing real campaign stuff and create the impression that time is still on their side. “Look! We’re planning for things that will happen in January! That’s months from now! We’re not dropping out, no sir.” I suppose another benefit is that Jeb’s super PAC, Right to Rise, now knows what the roadmap for the campaign is for the next few months and can tailor its strategy without running afoul of laws against coordination. (Assuming, of course, that they’re not already coordinating behind the scenes because they know the FEC is a largely worthless nonentity.)

The problem with all this is that everyone else knows the strategy too. Everyone knows their goals, everyone knows when to anticipate moves from the Jeb campaign, and everyone has a benchmark by which to gauge their future efforts. They’ve laid it all out. There are no more secrets.

This sort of telegraphing has already burned Jeb – in fact, it’s what got him in trouble at this week’s debate. The big punch Jeb threw at Rubio had to do with Rubio’s absenteeism in the Senate, and Rubio had a ready-made comeback that blunted the edge of Jeb’s attack and made him look like a desperate hypocrite. The reason Rubio was so well-prepared is that Jeb’s campaign had made it unmistakably obvious that he was going to attack Rubio over his missed votes. Right to Rise even set up a dumb Twitter account to troll Rubio for not “working.” They did everything but hand Rubio a strategy document explaining how Jeb was going to come at him, and Rubio was ready.

Now they’ve actually gone and handed Rubio that strategy document. It lays out every criticism Jeb is planning to use against his Florida rival. As Catanese wrote:

When Rubio was a state lawmaker, he used the state party credit card for personal expenses, a decision he later called a mistake. In 2005, he and Rivera jointly purchased a home that later faced foreclosure.

The best of the bunch is the document’s highly ominous, wildly vague conclusion: “Those who have looked into Marco's background in the past have been concerned with what they have found.” Concerned! This is apparently a reference to the vetting process Rubio went through when Mitt Romney was choosing his running mate in 2012. I’d imagine Team Rubio has anticipated much, if not all of this stuff, but now they know exactly which parting shots Jeb will fire at them as he sinks further below the waterline.