This is the media's real bias -- pro-business, pro-corporate, pro-CEO 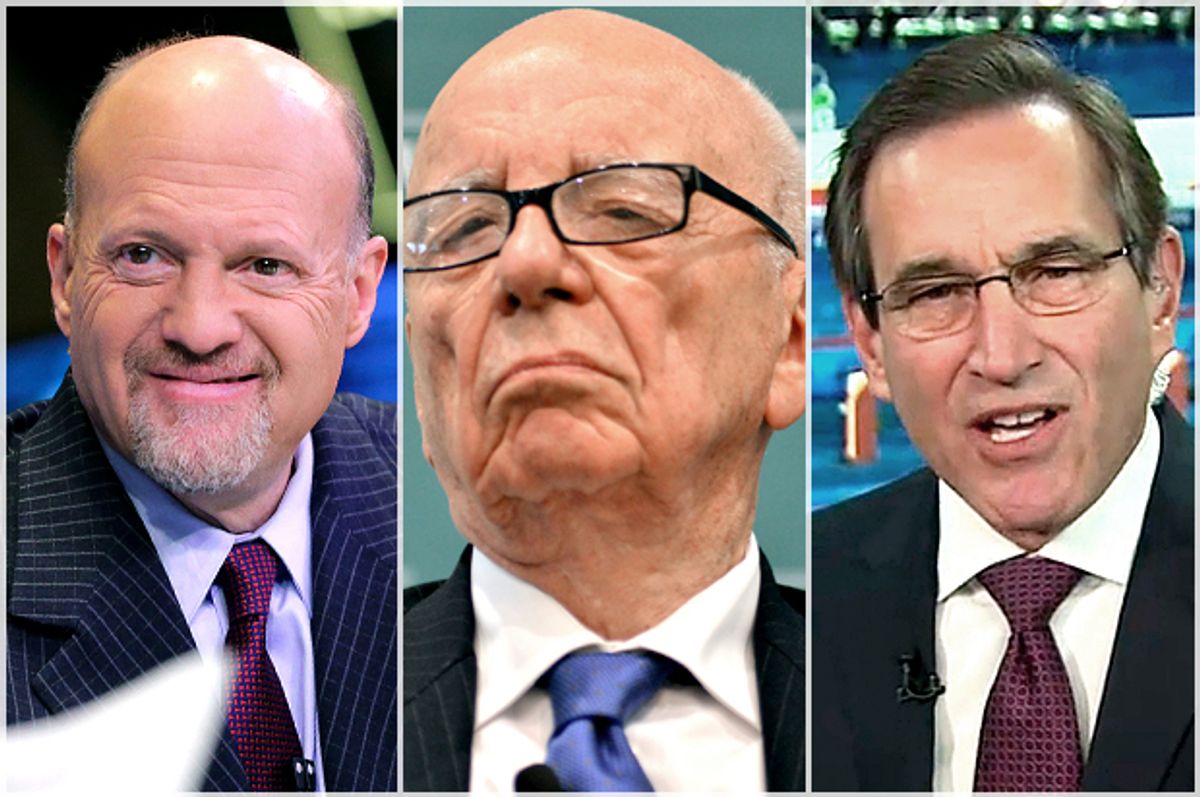 Every newspaper in the country has a business section–a whole section of the paper, every day, with extensive tables and reporting on various equity and bond markets, and features on different industries, particular companies, and individuals in various areas of commerce. In addition, every television network has programs devoted entirely to the workings of capital. There are cable stations which devote nearly all their programming to aspects of this topic. NPR, of course, has “Marketplace” in both evening and morning editions.

On the other hand, alongside this extensive coverage of business and investment, there is almost no coverage of labor. No newspaper I’m aware of has a “Labor” section. There are no television networks or programs devoted primarily to labor issues. There is some coverage, of course, some in the news section, some in the business section. There are some farther Left web publications like In These Times that provide a lot of coverage of work and labor topics. But, overall, really, there’s very little.

It seems quite natural though, doesn’t it? One must naturally know every day what the markets are doing. One wants to know every time the CEO of a major corporation is hired or fired. There are so many pieces of the business world that must be reported on. Where are the major currencies going? Will the trade deficits continue? How will the latest war affect the price of oil? And so on.

And when we think of what would constitute “labor news,” we must rack our brains a bit even to come up with topics on which to report. When there’s a strike, that’s reported–but there are hardly any strikes. The “Fight For 15" got some stories. But, as I say, one must actually think a bit about what “labor news” would be–an effort not required when it comes to “business news.” And yet, oddly enough, most of us work, most of us labor; it takes up a great deal of most of our lives. Our relations to our work, and to our employers and co-workers, are central to who we are. Work and health; work and housing; work and psychology; work and happiness; work and misery; work and family; work and poverty; work and wealth; work and education; work and politics; work and power; work and food... work and... you name it.

Why is it that there’s not a “Labor Section,” a “Labor Network,” an NPR show called “Workplace”?

I threw the question at a couple of friends of mine, both good liberals, and their responses helped me think this through further. First, one told me, media outlets–whether print, broadcast, or online--are businesses. They have to make money, they have to sell advertising. Thus, we have the conventional categories of news: actual national, international, and local news; sports, entertainment/arts, and business. This is the breakdown the industry has arrived at in order to fulfill their obligations to provide information and at the same time to stay in business. (This functionalist formula, of course, is now in crisis, but that was the idea). Furthermore, my other friend continued, crazy as it may seem, people are just interested in following the ins and outs of commerce and the markets, the rise and fall of business leaders, the drama of mergers, how high the DOW will climb during bull markets, how low it will sink during panics, and so on. This applies even to people who don’t have money in the markets and who work regular jobs or quite often now, irregular jobs. The business pages, then, both are useful for managers and investors and also function as an extension of the Sports section for everyone else.

Both these insights contain some truth. But what fascinated me was that in trying to explain our society’s fixation on business and markets, both of my friends invoked the workings of businesses and markets. Media sources provide vast swaths of information on business and very little on labor because, 1). They are businesses and so make business choices and 2). People (i.e. consumers) prefer information about businesses over information about work and workers. In some way or other, the absence of labor from the news media is a result of market forces. The market decides. People like sports, sports make money... so you get sports. Ditto with business. The market serves as a form of democracy. The people speak, the market responds. Something along those lines.

Money talks, bullshit walks, in the immortal words of Pete Rose. Thus, the fate of labor in the public consciousness.

But the extraordinary thing is not that powerful financial interests have the ability to determine what topics dominate news media which they, for the most part, own. The really notable fact is that so many people believe that this is natural, reasonable, and the result of some democratic consensus. Yet what, after all, does it mean to be “a powerful interest”? What does it mean to have power? Power is not just the ability to exert force on people, to make them do what you want. It is, of course, that, but it is something else too. Power means also the power to make reality, the power to determine what is important, what is news (and what is trivia, what is not news).       Power means the power to determine the terms of a conversation. We talk (and think) about this and not that: about business and not labor. This is not monolithic. Business and capital are often criticized in the business pages. Gretchen Morgenson, Paul Krugman, and others are vehement critics of how contemporary corporate capitalism operates. And yet, as we all concur, the economic world we see in our media is almost exclusively the world of business.

This does not involve plotting or conspiracy. That’s not how the reality-making business works. It’s about shared assumptions about what is natural, about what makes sense, about what is obvious and doesn’t even need to be said. Labor is peripheral; business is central. Of course, we want to know all about the great leaders of business in a way we certainly don’t want to know about the leaders of organized labor. Of course. Naturally. How could it be otherwise? And the elephant dancing on this particular table, of course, is the fact of the overwhelming power of business interests over both the economy and the political order. And public reality, media reality, is shaped largely to the rhythm of that dance. People make individual choices, of course. People have quirks. There are wide ranges of opinion on all topics.

There are wide ranges of opinion, as long as labor, especially organized labor, is always marginalized. Both political parties agree on this. All the networks and newspapers agree. The working class must never have a sense of itself as the working class. People must never see themselves as collective agents capable of exerting power. But no one has to say so. It is the sotto voce of our national politics.

How does power work, under normal circumstances? It gets what it wants without even asking. Only when things become a bit abnormal–when there is civil unrest, when public space is “occupied” for too long a time--do those in power need to bring in the monopoly of violent force held by the State.

And yet, things are in flux, as they usually are. The Occupy Movement changed some of the terms of the discussion. The current Black Lives Matter movement is having an impact. Local social justice movements like the one working in my city of New Haven are changing the landscape and vocabulary of local politics. Our society is not totalitarian. Other realities can challenge the dominant one. Whatever can encourage people to look more clearly at the conditions of their lives helps put a dent in the reality and naturalness of current power relations. But there are a lot of tough nuts to crack just to get to the point where it’s clear that labor exists, that people work; that most people live with genuine oppression in the workplace, that most people do not get to exercise creativity or autonomy or solidarity in their work; that these are central facts in most people’s lives. Still too many people don’t have jobs, and most people just don’t make enough money. Our current moment of capitalism in which there’s such a fixation on business news is also a moment of chronic unemployment, underemployment, homelessness, hunger, powerlessness, political exhaustion, violence, and poverty of body and spirit.

We’re in a struggle–indeed, a very classic one between the investors, owners, managers, and rent-collectors of the world versus the people who work for them and pay their rents. And the former group, whom we can also call the reality-makers, are trying their best to deny that there is any struggle taking place at all.

And they’ve been succeeding remarkably well. Even after the financial collapse of 2008, that tribe of wizards known as economists, who had failed utterly to predict, contain, or understand the crisis, retained their credibility. They’re still the experts, policy advisors, and media go-to guys. Barak Obama, whom labor unions worked so hard to elect, proceeded to ignore them once in office. Even Bernie Sanders, that great Democratic Socialist and potential savior to so many on the Left, as he spoke about inequality, corporate greed and crime, the 99%, raising the minimum wage, the need for people to come together to remake democracy--even he, in the first Democratic Party debate, never mentioned making it more possible for people to join unions.

It will take struggle, it will take work, to put work, labor, and especially organized labor back into our shared reality.

And we can’t continue to invoke “the market” to explain labor’s absence from this picture. To explain the market, we must invoke... the market! How and why does the market work? Well, because of “market forces...” And round it goes. As we all know, one cannot explain a concept in terms merely of itself. There must be something else, some broader form of thinking that makes the concept intelligible.

The market, entrepreneurship, the business and corporate perspectives appear intelligible and natural. Social solidarity across classes and races, a shared struggle for social and economic justice–these appear unintelligible and inconceivable. How would it be done? Electoral politics would play a part, but only a part. How can people join together in their workplaces and communities? How can we create shared cultures with values–and with real power--that would contest the overwhelming power of business, finance, and all their allies?

How, in short, do we change reality?

Right now, I’ll just say that there can be no successful progressive movement in this country that is not closely linked to organized labor. Unions have the organizing ability, the trained personnel, the commitment (in many though not all cases) to social justice, and they have some money–not like corporate money, but more than anyone else on the Left. To accomplish this, unions must commit themselves to organizing communities outside the traditional workplaces, must work to create community-labor alliances, and must more seriously enter the struggle to remake our shared reality. We cannot allow the world-view of business and markets to continue to prevail across the media. The hard, hard work of grassroots organizing, the efforts on the ground to improve the lives of working people, the building of a social justice movement with real power... all this will become just a little easier if organized labor puts more of its resources into changing not just the realities of economic relations, but changing the conceptual reality–the shared sense of what is thinkable–that allows market values to be the dominant values and business news to be the only news.