"Problems like this don’t go away overnight": "Spotlight" director Tom McCarthy calls for the Catholic Church to do more to address and prevent sex abuse 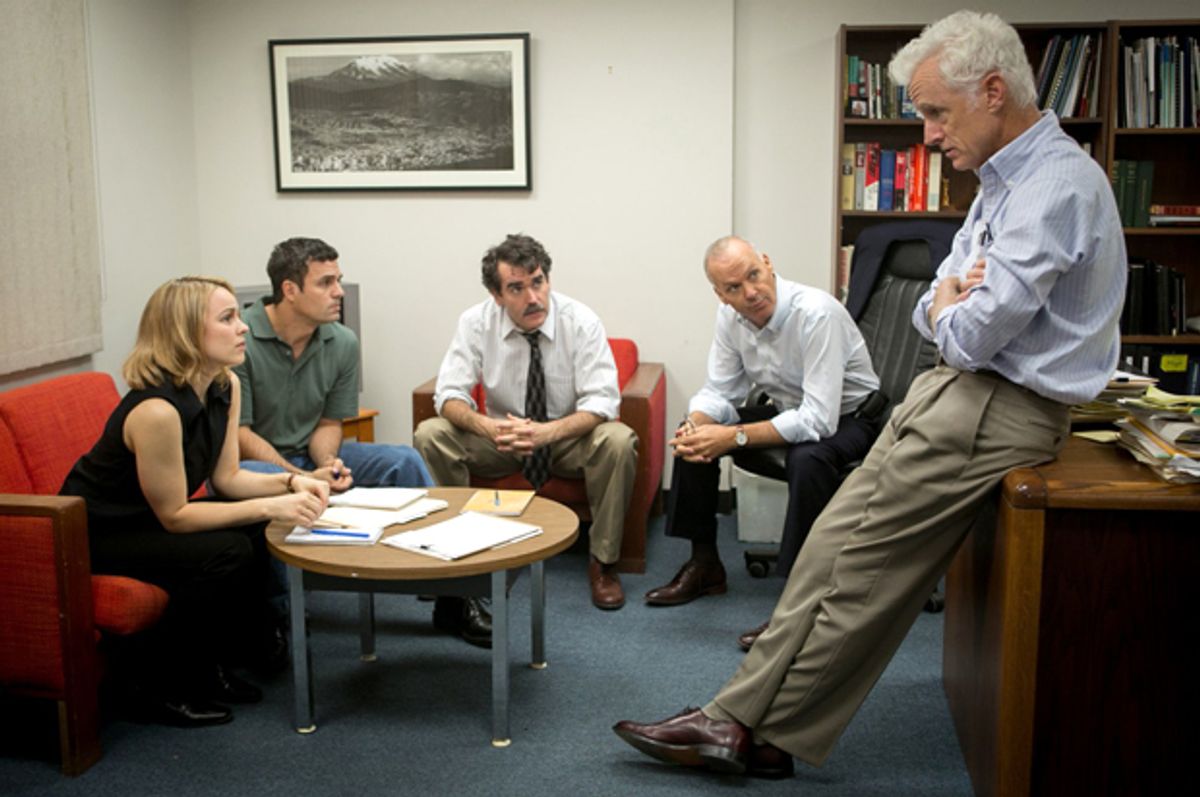 As awards season heats up, Tom McCarthy’s “Spotlight” has emerged, among those who like to prognosticate about these things, as a clear Best Picture frontrunner. A stirring tribute to the Spotlight investigative reporting team at the Boston Globe who broke the story of the sex abuse scandal in the Massachusetts Catholic Church in 2002, the film achieves the difficult task of making gripping, edge-of-your-seat drama about the unfussy, often-tedious business of journalism: Cold-calling, digging through archives, knocking on doors and pounding pavements in order to uncover the truth.

Bolstered by a stellar cast including Mark Ruffalo, Michael Keaton, Rachel McAdams, Liev Schreiber and John Slattery as the real life Globe journalists — as McCarthy calls them, "our heroes" — the film is already being name-checked along with "All the President's Men" as one of the most potent cinematic tributes to the power of the press. Pretty impressive, considering it doesn't even open until November 6.

Recently, we caught up with director Tom McCarthy to chat about his hopes for healing within the Catholic Church, the film's Oscar buzz and the uncertain fate of the journalism industry today. As McCarthy tells us, "There’s something so essential to a free and healthy press in our country. The fact that it is eroding should really be a great alarm to people, as much as the ice caps are eroding. We should be really a bit worried about the state of journalism, and not just for the journalists but for us, because that’s who it will impact most."

This interview has been lightly edited and condensed.

What were the challenges of shooting a movie about journalism, which is something one generally wouldn’t consider very cinematic?

It was definitely a concern. My concern was over-ridden by just how compelled I was by the story, and how involved I was, especially as it got to writing the screenplay, but I just figured we’d figure out a way. Yes, it was a challenge, but not in terms of just journalism but [as] a movie that’s driven by that much information. And such a sort of painstaking at times investigation, how do you make that compelling to an audience at large? How do you make it entertaining, right?

Because first and foremost, that’s our job. We’re there to tell a story and make people wanna sit in a theatre on a Friday night or at home on Wednesday night and watch this movie. But I don’t know, I just had so much faith in how rich and textured the material was, and the characters involved — the heart of the story. And I always had confidence that we’d figure that out.

The film really does seem like an ode to old school, boots-on-the-ground reporting — sort of a love letter to journalism. Was that something you really sought to drive home from the beginning?

I did, but I think we were all very careful not romanticize it or sensationalize it or glorify it in a way. Really, we were just trying to show it. I wanted reporters everywhere to say: That’s how we do it, that’s what we do, that’s what it looks like, that’s what it smells like, that’s what it feels like. We wanted that and we thought if we did that and we captured that in a way, and reporters would give us a stamp of approval, then that was enough. We just wanted the audiences to see that: Look, it’s not always pretty, it’s sloppy, it’s certainly not fancy but there’s something incredibly powerful about it and incredibly noble about it, and essential to our society. This is when we start inching towards the bigger words that we hate to use in daily conversation because they sound pretentious.

But, there’s something so essential to a free and healthy press in our country. The fact that it is eroding should really be a great alarm to people, as much as the ice caps are eroding. We should be really a bit worried about the state of journalism, and not just for the journalists but for us, because that’s who it will impact most. So, sometimes there’s a disconnect about that, but it’s like, look: let’s just show these guys and what they did. We were fortunate to have journalists who were just really exceptional people, who did really exceptional work. They were our heroes of the story. As were the survivors who came forward and were brave enough to open up and share their stories. We felt like we had such wonderful characters to build the story on.

I saw the actors on stage at the Toronto Film Festival along with their real-life counterparts, and they emphasized that they worked really hard to make their portrayals true to life. Why was that verisimilitude so important to you?

I guess on some level, it’s just where you start. You just want to get it right. But the movie is all about factual accuracy on some level and getting the facts right. And I feel like, they mentioned in the movie a few times that if they didn’t get it right, they left themselves open [to criticism]. And if they left themselves open they were going to miss an opportunity to make an amazing impact not just on the readership in the city of Boston, but it turns out, globally. To that end, I think that we felt we wanted to get it right.

It started, I think, with Josh and I at the script level and then it trickled down to departments, that notion of let’s make it as close as we can. I didn’t have to push the actors to do that. They did that research on their own, they’re good actors. They were professionals and they just did their work. I wouldn’t expect anything less.

And that’s every department, whether it’s my production designer or Steve Carter who built those incredible sets for the newsroom and the Spotlight office, whether it was Wendy Chuck who just reached out to every reporter, saw their wardrobes, visited their homes, really got into that, “What do you wear? What did you wear?”

We all took our inspiration, quite honestly, from the reporting. From the work that these reporters did, which was so unadorned. It was really just honest, straight-forward, authentic reporting and that’s what made it so resonant. And consciously or unconsciously we thought that if we could achieve that, in our storytelling, perhaps it would have a similar resonance, a similar power, although in a different form. That’s what we were shooting for.

Do you think a story like this could be broken now when publications are so cashed-strapped?

There’s definitely a decreased likelihood. All these small towns where the newspapers are drying up or shuttered or completely diminished. Yeah, of course. Someone said to me along the way, “Hey, I think it’s a great time to be a part of local corruption,” because you don’t have a reporter in every court-house or in every community meeting or hanging out at the police station. They’re not around and this is when great reporters do their work. They develop all these connections, they have insights that most of us don’t have, they develop relationships, they build the Rolodex. So of course, more and more stories are slipping through the cracks. Those are exactly the alarm bells we should be sounding when people see this movie, like, “Yeah, we could’ve missed that.” A lot more children’s lives could be ruined, a lot more adults’ lives could be ruined. I think that’s very important.

Mark Ruffalo recently spoke out about how he was hoping the Catholic Church would use the film as a platform to start the healing process. How much work is there still to be done on that front, and was that an important goal for you in making the film?

Not initially, but as I became more involved in the screenplay and the stories, talking to more of these organizations like SNAP, and Bishop Accountability, these wonderful organizations that are really pushing towards change in the Catholic Church. Like with anything, the more knowledge you have, the more you hope there is in fact change.

I’m not an expert on this, but I had the opportunity to speak with the experts on this quite a bit. And look, it seems to me like the Church has made some progress and with this Pope certainly, there’s reason for optimism and hope, but actions speak louder than words. And there’s a real call for strength and increased transparency and action of behalf of the Catholic Church. Problems like this don’t go away overnight, they go away over ten years. This is still happening.

Welfare and lives are still at stake. And while those are the stakes, there needs to be change. Real practice and policy that needs to be changed in the Catholic Church. That’s what the call is for. The words, the Pope speaking to it, that’s a good sign but that’s not the answer. And I feel like that seems to be the rallying cry, that we need change until the children are safe. I know a lot of Catholics who feel very strongly about that, too.

We did a screening last night in New York, at 34th street. And afterwards, a man approached one of our producers and said, “I’m a survivor, I haven’t told anyone. I’m going to do something about it. I’m going to deal with it now.” My producer was very shaken by it. He said it was really courageous. He was really shaken, like wow. So, it’s still out there, and there’s still people living in the shadows, and there’s still children at stake. I think that’s sort of the call.

The reception to the film has pretty phenomenal, and a lot of people have dubbed it the Oscar Best Picture frontrunner, which must be crazy. How much are you thinking about awards right now?

I’ve been doing this for a while and I think you’ve got to take everything you can, the good or the bad. I, as a filmmaker can feel that the movie has connected with audiences and that’s really exciting. We haven’t even opened yet, I’m basing that on the film festivals and some of the screenings we’ve been doing and the response from the press, which is all very exciting. A lot of very good people worked very hard on this movie, and it is a movie about something. As you said, it can raise dialogue on a lot of these issues, whether it be journalism or abuse, specifically in the Church or in other institutions.

That’s exciting when you have a project that has that many opportunities to raise the conversation. And we know we have a film that’s really entertaining. But right now my focus is on opening the movie, on spreading the word and getting as many people to see it as possible. Because we make movies for the audiences, that’s why we do it. So even the awards, when and if they come, what’s that about? It’s really not so you have an award, it’s so it raises awareness for the movie so even more people will see it. And that’s all we want. We want people to see this movie. That’s what we’re gunning for on November 6th, when it opens.