All hail the Satanic Temple: Up close with the brilliant "Satanists" who drive the faith-deranged nuts 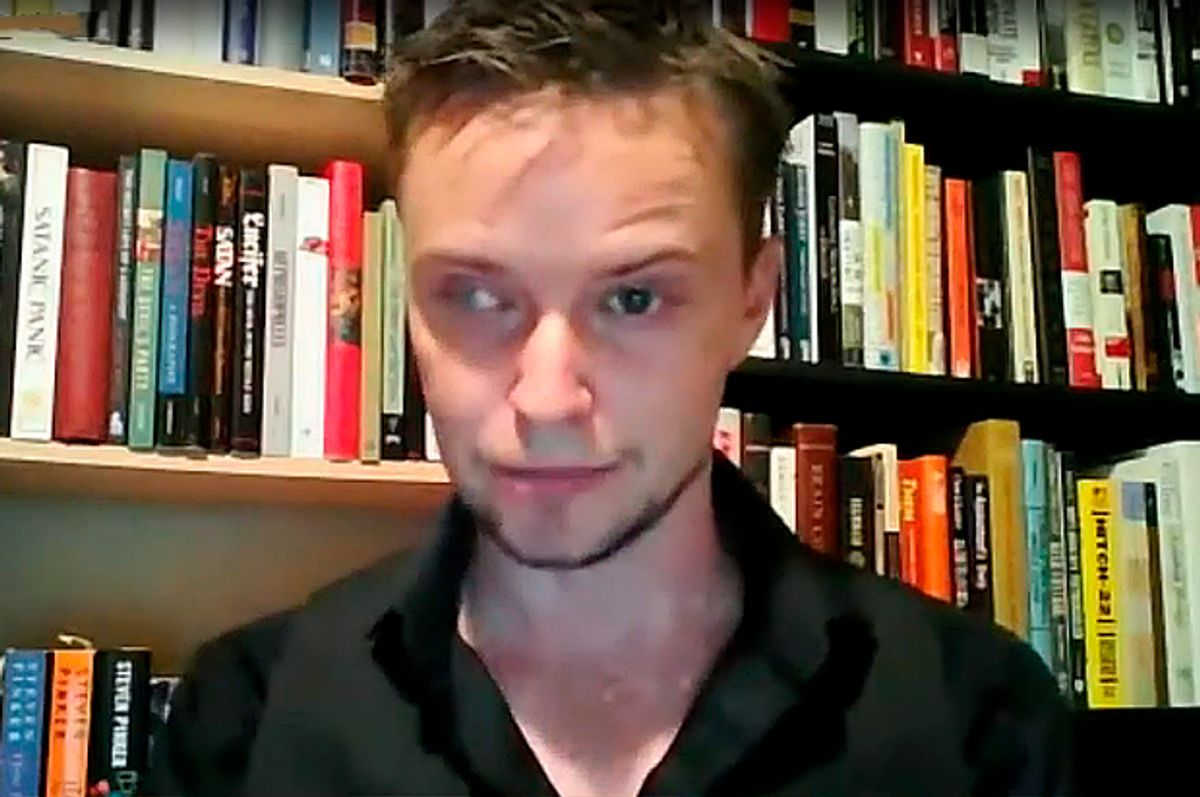 All hail Satan and the Satanic Temple!

But first, some words of explanation.

The faith-deranged, day in and day out, in the current century and in those past, have furnished and continue to furnish us with examples of the inherent iniquity of their disorder, a disorder that has, especially in recent times, insinuated itself into and dangerously infected our already-ailing body politic, and all in the name of the (supposedly) Good Lord Almighty.

Last week, doomed Republican 2016 contender Jeb Bush announced that he would travel to Regent University, that miasmic fiefdom of faith fiends and darkness overseen by televangelist hatemonger Pat Robertson, to seek his blessing. Fat lot of good it will do him: Robertson, we recall, purveyed to the world intelligence he received from the Lord that Romney would win in 2012. Futile though it may be, Bush’s visit will nonetheless help return to relevance a fading crackpot pulpiteer whose litany of poppycock pronouncements include blaming (with Jerry Falwell) 9/11 on American gays and feminists, advocating exorcisms and denouncing leftists as “livid about killing babies” as part of their “culture of death.”

(Note to crackpot pulpiteer: look up the definition of livid, and use the word correctly in your hopefully few remaining years.)

The New York Times revealed that a gaggle of the Almighty’s henchmen hailing from the Word of Life Church in central New York chose to enact on Earth the wicked despotism mandated by Christianity for the hereafter. They reportedly used the Christian cult’s creed as justification for punching, kicking and whipping to death one of their dupes and severely injuring another. They also reportedly exploited their “flock” for physical labor, which included making little girls handle excrement and in general behaving nastily to minors.

(The article’s author neglects to mention the damage this church has inflicted on its young charges by warping their minds with bogus accounts of the origins of our species and our universe -- a crime in and of itself. He also discusses “Bible study” as though such a determined effort by obscurantist metaphysical charlatans to inculcate macabre, misogynistic doctrines and servility to a phony celestial satrap were a benign phenomenon that under other circumstances would cause no harm. But being instructed in how to to kowtow to a supernatural entity that ordained genocide, human sacrifice, chattel slavery and second-class status for women can do nothing other than attrit the psyche and wither cognitive faculties.)

To reprise all the bloodshed, mayhem and violence carried out at the Lord’s behest in the Middle East and West Africa would be superfluous; just think ISIS, Al Qaida and Boko Haram. Wife-beating, beheadings and female genital mutilation. (Between 100-140 million women alive today, in twenty-nine mostly Muslim countries, have suffered this savagery.) Chopped-off hands, gays hurled from rooftops and kidnapped schoolgirls. Toss in, from bygone centuries, the Salem witch hunts, the Holy Inquisition, European religious wars, the Crusades and the Muslim Conquests, and you have a crimes-against-humanity record of rapine, massacre and barbarity that would land the Lord in the electric chair if he existed. Which, of course, he does not.

Who might be up to the task?  The only one with experience in combatting the Almighty, His archenemy, Satan.

Satan, at least according to the literature, has proved no slouch in fighting the Lord, thwarting His allegedly love-filled but in fact baleful designs on us, and enduring banishment from his ethereal homeland, all because he refused to submit to divine tyranny. You know the story: God supposedly booted Satan out of heaven for leading a revolt of his fellow angels outraged by God’s undemocratic, Hague-worthy governance and disdainful trampling over their rights.

(Some leader, the Lord. Fully a third of the angels under His command rose up against Him and fought alongside Satan. How would we regard General Petraeus if a third of his troops had mutinied in Iraq? Or General Patton if a third of the Seventh U.S. Army had not only surrendered to the Nazis, but started fighting on their side? Why does God get a pass on this? Why are Senators Rubio and Cruz not demanding a Benghazi-style investigation into this flagrant dereliction of heavenly duty?)

Satan, so the story goes, refused to accept the terms of his exile in hell and decided to get even. He ascended to the world and espied the Lord’s first two newly assembled naïfs ambling about in Eden, happy with what can only be termed a fool’s paradise, unaware of their unclothed state, so ignorant they could not tell the difference between Good and Evil.

(Think of it: Adam and Eve would have observed Hitler, Stalin’s purges, Josef Fritzl’s 24-year rape-riddled imprisonment of his daughter, the rise of ISIS, the birth of Jerry Falwell’s Moral Majority, the reign of Dubya and the rise of Sarah Palin, and found nothing at all wrong with any of it. What kind of Lord could have created such amoral beings?)

But then Satan turned himself into a serpent, managed to thwart the forewarned Angel Gabriel (Eden’s gatekeeper), and slithered up to Eve. Making the wholly reasonable argument that it would be better to be as God and know something rather than nothing, he persuaded her to bite a piece of fruit from the Tree of the Knowledge of Good and Evil. Which, again, leads to questions about the Almighty’s competence: given the stakes, couldn’t He have appointed a more reliable guardian for humanity? And has the Lord sanctioned Gabriel for his calamitous, inexplicable oversight, which ended up costing humanity its future?

Careful readers might have noticed I took the last instance of Our Heavenly Father’s malfeasance not from the Bible, but from Milton’s incomparable seventeenth-century literary masterpiece, "Paradise Lost." (Read it for the wondrous language, second only to that of Shakespeare, and for the backstory on Satan, who makes ridiculously few appearances in the Bible.) Whether Milton intended it or not, his opus presents the story of Satan’s revolt against God in such a way that Satan comes out looking wickedly cool, admirable and heroic in fighting the “tyranny of heaven,” resisting “Free and to none accountable, preferring/Hard liberty before the easy yoke/Of servile pomp,” and gifted with “the courage never to submit or yield.” Satan comes across as, well, diabolically clever, not one you could slither past in some sort of reptile costume.

Satan is a democrat, Milton tells us, ruling the nether realms by “the popular vote” – in other words, he has to persuade his subjects to support him, and doesn’t just bully them around, as does God. Up in heaven, however, you have to spend “hours in joy and hymning” praising your “Omnipotent/Immutable, Immortal, Infinite/Eternal King,” sucking up His abuse with relish. (No matter what Bush-era attorney general John Ashcroft seditiously said, kings are something we Americans are supposed to loath, no?)

Satan would have none of it. “Better to reign in Hell, than serve in Heaven,” he observed oh so eloquently.

The result of Satan’s strivings? We are neither the ignorant dolts the Lord created us as, nor the docile servants of an unimpeachable despot. We may not have free will (as Milton and the Bible erroneously aver we do), but we do at least know the difference between good and evil. An added benefit for which we can thank Satan: we can get it on. Milton portrays Adam and Eve having sex only after tasting the forbidden fruit.

Anyone who is self-respecting enough to oppose the Lord and His psychopathic chiliasm is, a fortiori, a decent, noble person. Since Satan stands as a hero for his dissidence, his resistance to supernatural tyranny, and, therefore, his unparalleled service to human liberty, you’d think some might even worship him.

Enter the Satanic Temple, founded three years ago and presided over by Doug Mesner, aka Lucien Greaves. The 40-year-old Mesner embarked on his Satanic mission because, as he told Fox News’ Megyn Kelly, the Temple “is an embodiment of [his] deeply held beliefs” that answers the “need for a counterbalance against the dominant religious privilege in America today.” The Temple now has forty thousand members. Joining involves not battening on the blood of newborns, but signing up online.

But one fact needs to be made clear immediately: neither Mesner nor the Temple’s other members believe in Satan or anything supernatural. They are activists encouraging, says their web site, “benevolence and empathy among all people,” the rejection of “tyrannical authority,” and the spread of “practical common sense and justice,” and hope to take part in “public affairs, wherever the issues might benefit from rational, Satanic insights.” They advocate the separation of church and state, which means, among other things, opposing prayer in schools and monuments to the Ten Commandments on public grounds.

This they have done effectively. Just last week, merely by demanding equal time to worship Satan on the gridiron, they undid the theocratic doings of a high school football coach near Seattle who imposed prayer sessions on his players.

"The school district needs to create religious opportunity for everyone or ban it completely," declared Abe Bartlett, the (rationalist, to-be-lauded-eternally) student who called in the Satanists. The school district banned the coach’s freelance superstitious ritual from the turf and suspended him.

Most famously, the Satanic Temple took part in the successful campaign earlier in the year to have a stone monstrosity erected in honor of the Ten Commandments removed by the state’s Supreme Court from the lawn of the Oklahoma Capitol. Their demarche consisted in petitioning on equal rights grounds to have a Satanic statue built alongside that of the Decalogue, one bearing inscriptions including the entirely un-biblical, and therefore humanely truthful, lines “The spirit of compassion, wisdom, and justice should always prevail over the written or spoken word” and “Prisons are built with stones of Law, Brothels with bricks of Religion.”

Unless you have been deranged by one faith or another, you will find no fault with either pronouncement.

A few days ago I spoke with Mesner by Skype. (We had met at the Atheist Alliance of America’s conference in Atlanta the previous weekend, where he delivered an address that is well worth a view.) Articulate and clearly at peace with himself, straightaway he admitted to deriving his admiration for Satan from Milton’s poem and from Anatole France’s novel “Revenge of the Angels,” and called the Lord “the ultimate tyrant.” The church he viewed as “regressive and depraved,” and Jesus as a figure so liable to various interpretations that his name can be deployed by people with entirely divergent aims.

In order to “lead by example,” Mesner told me he refuses to apply to the IRS for tax exempt status, which he opposes on principle. The Satanic Temple’s income comes from crowdfunding through Indiegogo, and Mesner himself does other work to get by. In other words, in contradistinction to evangelists who fly around on tax-exempt private jets and live in tax-exempt mansions, he is not getting rich off his “ministry.”

Satanism, he went on to explain, means secularism, critical thinking, belief in the here and now, gender equality and a woman’s right to do as she sees fit with her body. It means, above all, “holding fast to a sense of ethics, having a good grasp on what your morals are, no matter what society around says.” Which rules out any sort of God-based bunkum and mandates humanism.

So, faith-deranged, beware! Satan is on your case!

And judging by his judicial record so far, he will prevail.