How the GOP almost forced a Social Security disaster: Everything you need to know about their disgraceful hostage-taking

Prior to last week's budget deal, the GOP was doing everything it could to dismantle Social Security. Here's how 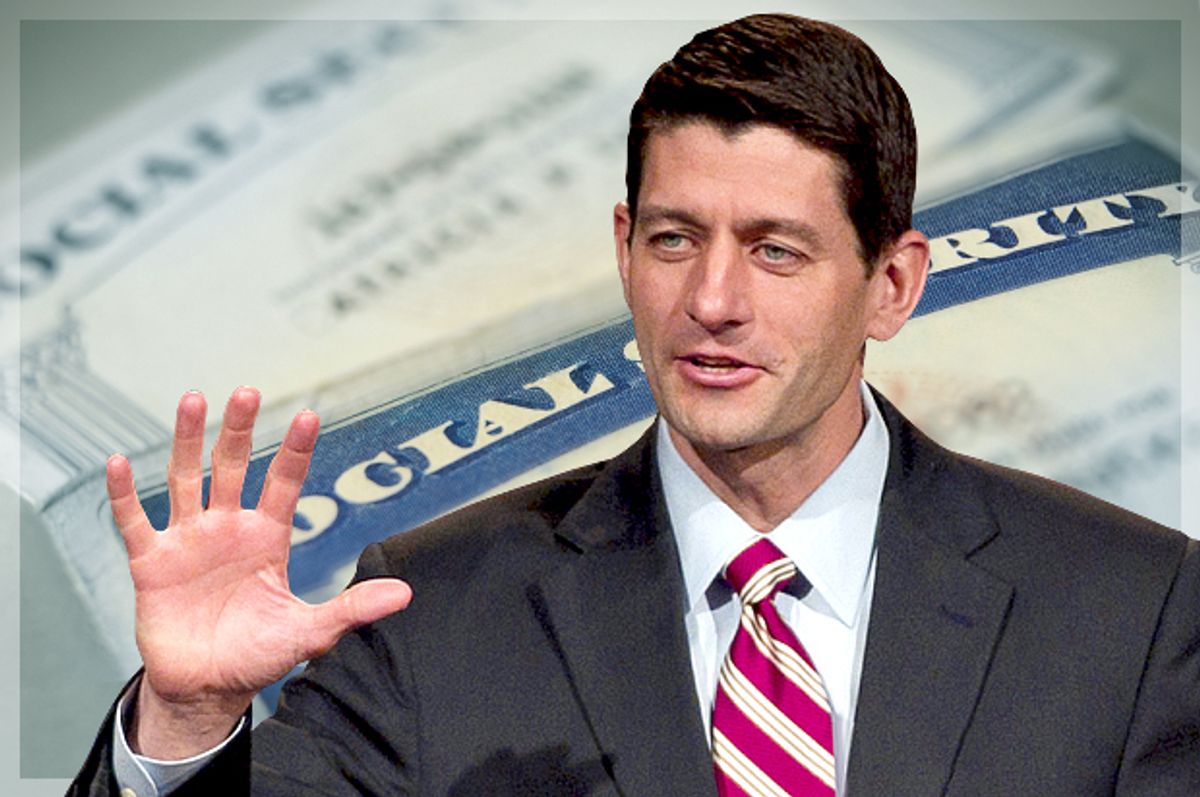 The comprehensive budget deal that passed Congress last week involved the temporary release of three hostages: One hostage was the debt limit, which will not need to be raised before March, 2017. A second hostage was the federal government, which might not, depending on who you ask, experience another shutdown for two fiscal years. The third hostage was Social Security.

When workers have Social Security contributions deducted from their wages, those deducted monies are premiums for Social Security’s insurance against the loss of wages in the event of death, disability or old age. Those deducted funds are sent by their employers to the U.S. Treasury Department.

Unbeknownst to most people, the money is then divided between two separate trust funds. This is a quirk of history. Two parts of Social Security’s wage insurance -- protection against the loss of wages in the event of death and old age -- were enacted in the 1930s. That is when the Old Age and Survivors Insurance Trust Fund (“OASI”) was established. The designers of Social Security wanted disability insurance enacted in the 1930s, as well, but it didn’t happen until 1956. When it did, its own trust fund (“DI”) was established.

Nothing denotes to those making Social Security contributions what percentage goes to DI or OASI – nor should it. The benefits are intertwined and seamless, all generated from the same benefit formula. Policymakers, experts, and analysts have generally always treated the funds as combined, because of how interconnected all parts of Social Security are. Because all aspects of Social Security are so intertwined, the annual Trustees Reports provide projections as if the two trust funds were combined, and these are the projections most cited and most useful.

As just one example of the interconnectedness, the funds which cover the costs of disability benefits are drawn from DI only until the disabled worker receiving them reaches full retirement age, at which point the payments are drawn from OASI. The amount is the same; the beneficiary likely is unaware of the change, since it has no impact whatsoever, but, by law, the monies can only be drawn from the specified fund.

Not surprisingly, from time to time, the percentage of the Social Security contributions going to each of the two funds must be adjusted to keep both funds in balance with each other. Though you would think, for something so routine, something having no impact on what workers pay or what benefits are received, the Managing Trustee, who happens to be the Secretary of the Treasury, would have the authority to simply rebalance the funds.

What would make even more sense is to simply combine the two funds into one. Many experts have recommended combining them, including the 1979 Social Security Advisory Council, which unanimously recommended a unitary trust fund, arguing that requiring legislative reallocations “is cumbersome and can cause needless public worry about the financial integrity of the Social Security system.”

But there remain two separate trust funds, and the Managing Trustee does not have the authority to engage in simple rebalancing. Instead it takes an act of Congress.

The goal of the hostage-takers

When Congress has been responsible and done its job, this was no problem. Congress has reallocated the percentage of Social Security contributions going to the two funds 11 times in the past. About half the time, it increased the share going to OASI and about half the time, it increased the share for DI. Indeed, because of a projected shortfall in OASI in the early 1980s, Congress over-allocated from DI back then, and has never restored that over-allocation -- and the fund was projected to run dry next year, at the height of election season.

This was too valuable a hostage to let go with no ransom.

Unlike the other hostages, involving funding the government and raising the debt limit, the Social Security hostage directly affects some of our most vulnerable fellow Americans. If Congress did not act before the end of 2016, benefits would have been cut at that time by 20 percent. The commissioner of Social Security said recently that if Congress did not act, the automatic cuts would be a “death sentence” for those beneficiaries.

The average disabled-worker benefit is $1,165 a month, or about $39 per day. These modest benefits keep millions of men, women, and children from deep poverty, even homelessness, and serve as the sole or main source of income for about 80 percent of beneficiaries. Without these benefits, about one out of two beneficiaries would live in poverty; even with benefits, most have low incomes.

And one reality bears pointing out here: These beneficiaries could be any of us. Even the healthiest among us can find ourselves in a disabling car accident or stricken with a life-threatening, disabling illness

The Republican hostage takers assert, against all evidence, that the disability insurance part of Social Security is broken, overrun with fraudulent payments. But the Inspector General of the Social Security Administration found that only one-third of one percent of the cases his office sampled involved fraud.

Despite their protestations to the contrary, those who threatened to hold Social Security hostage were not trying to improve Social Security. They are seeking to cut it while avoiding political accountability. They want to dismantle it, brick by brick. This is not new.

The battle against Social Security

In 2009, a Congressional effort to hold hostage the debt limit to force a fast-track deficit commission was described by then-Chairman of the Senate Finance Committee Max Baucus (D-MT) for what it would have been: "A Social Security-cutting machine.”

That effort was defeated, but President Obama set up the commission by executive order. Not surprisingly, that commission, chaired by two opponents of Social Security, former Senator Alan Simpson (R-WY) and businessman Erskine Bowles, recommended deep cuts to Social Security along with a poison pill that would have slowly and inexorably destroyed it. Fortunately, the Commission did not get the requisite number of votes, and so Congress never had to address its recommendations on an up or down vote.

The failure of Bowles-Simpson was followed by once more using the need to raise the debt limit to force the formation of the so-called Supercommittee, which had essentially the same charge as the Bowles-Simpson committee, but which this time had a stick: If the Supercommittee failed, there would be mandatory sequestration that was so draconian that it would force Congress to reach agreement. The Supercommittee failed to reach an agreement, and we are now stuck with sequestration. The sequestration caps were loosened a bit for the next two years as part of last week’s deal. But sequestration should be repealed outright; it should not be traded for the dismantling of Social Security, as Republican Leader Mitch McConnell and others occasionally, in candid moments, suggest.

The re-allocation in this deal – the release of the hostage -- should have put both Social Security funds on equal footing, so that all benefits could be paid in full and on time through 2034. Instead, the re-allocation is designed to set up a new false crisis and a new hostage down the road, in 2022 -- but that is certainly better than having the must-pass legislation be acted on in next year’s lame duck session, after the election, which is what would have happened without this deal.

The end of 2016, the lame duck session, just after the 2016 election, probably in December, when most normal people are distracted by the holidays, is the most dangerous time for must-pass legislation. Some who are voting will not be returning to Congress, either because they are retiring or have just been defeated. The end of 2016 is as far away from the next election as possible. Everyone is scrambling to finish and get home for the holidays, and the American people are distracted. It is the perfect time for those who want to cut Social Security to do their undemocratic dirty work.

Fortunately, thanks to the comprehensive deal just enacted, that bullet has been dodged. The ransom price included a diversion of Social Security resources towards virtually nonexistent fraud. Those provisions will likely require some workers with disabilities to wait longer to receive their earned benefits. That is wrong. But no benefits were cut nor eligibility rules changed, and gambling on a better outcome in the lame duck would have been extremely risky.

Now that the false crisis is behind us and the hostage is free, we should expand Social Security’s modest benefits and require the wealthiest among us finally to pay their fair share. That is what most Americans want and that is the right policy, given the nation’s looming retirement income crisis and rising income inequality.

Over a half dozen bills have been introduced in Congress this year alone to do just that. Senator Bernie Sanders (I-VT) has a bill, for example, that not only would expand benefits substantially, but would assure that all benefits, including the expanded disability insurance benefits, could be paid in full and on time for the next half century. Rep. John Larson (D-Ct) has a bill that expands benefits while ensuring that all benefits, including disability insurance benefits, could be paid for the next three-quarters of a century.

Social Security should never be part of a comprehensive deal, as a matter of principle. It should certainly not be part of any deal whose goal is to reduce the deficit or raise the debt limit, since Social Security doesn’t add a penny to the federal debt. Social Security legislation should go through regular order, in the light of day. If that were done, Social Security would be expanded. No hostage taking, no ransom, no behind the scenes deals released and voted on in the wee hours of the morning. Just straightforward, old fashioned legislating. That is what has brought us Social Security, among the most successful domestic programs in the nation’s history. That is what will bring us expansion, if our elected leaders do their job and follow the will of the people they are elected to represent.