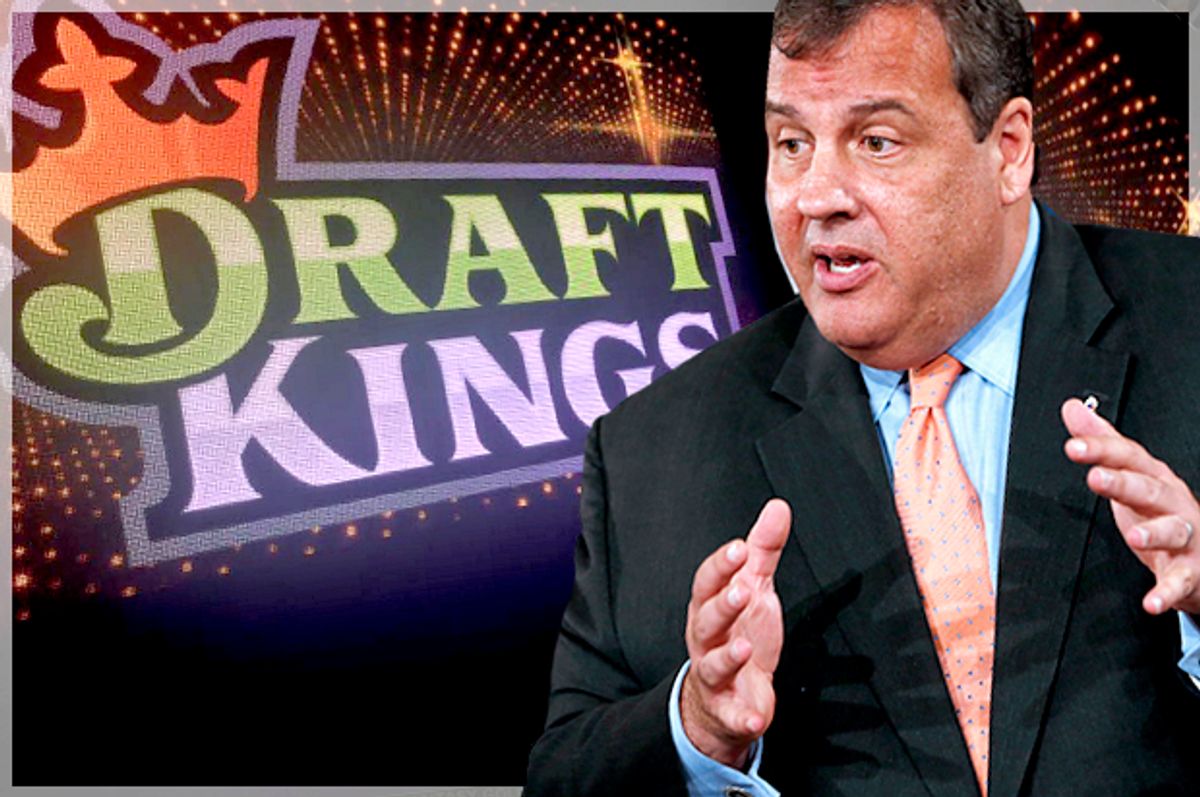 Chris Christie might have thought it was ludicrous for the CNBC debate moderators to ask about the booming yet ethically murky "daily fantasy football" industry, but they had defensible reasons for doing so. Websites such as Draft Kings and FanDuel now generate tens of billions of dollars, by way of a product that bears striking similarities to online gambling.

That daily fantasy football should have become such a booming enterprise — and that it might merit consideration during a presidential debate — might surprise some. It shouldn't, and especially not on the conservative end of the spectrum. While baseball may be the America’s official pastime, football has been its most popular sport for more than thirty years. Around this same time, more and more Republican voters, presidential candidates and even presidents have been strongly identified with the game.

Indeed, although he may not have realized it, when Christie expressed outrage at the debate’s disproportionate attention to football, he was in part attacking the values of his own party’s base. As writer Neal Gabler noted in an editorial for ESPN, “Of people who identified themselves as part of the NFL fan base 83 percent were white, 64 percent  were male, 51 percent were 45 years or older, only 32 percent made less than $60,000 a year, and, to finish the point, registered Republicans were 21 percent more likely to be NFL fans than registered Democrats.” In addition, football is particularly popular in the South, one of the Republican Party’s regional strongholds in America today.

Richard Nixon was the first president to be widely viewed as a “football freak,” even though his personal experience playing the sport was limited to serving as a tackling dummy for the small football program at the Quaker college he attended. Despite this inglorious beginning, Nixon was openly passionate about the game, impressing even harsh critics like Hunter S. Thompson with his encyclopedic knowledge of college and professional football statistics. This same enthusiasm, though, also got him into minor trouble, such as when he asked Miami Dolphins’ coach Don Shula to run a play he suggested during Super Bowl VI (the play failed and the Dallas Cowboys ultimately won) or annoyed anti-Vietnam War protesters at the Lincoln Memorial by trying to talk to them about college football instead of their political concerns.

Nixon’s penchant for unflattering associations with football apparently set a precedent for his party’s subsequent commanders in chief. Gerald Ford’s opponents often liked to insult his intelligence by referencing the multiple concussions he suffered while playing the game in his youth, quoting Lyndon Johnson’s old observation that Ford “spent too much time playing football without a helmet.” Ronald Reagan allowed his second inauguration to be postponed by a day so as to not conflict with Super Bowl XIX, instead ushering in the first day of his second term by performing the ceremonial coin flip at the Big Game. George W. Bush, meanwhile, allowed football metaphors to become so commonplace among members of his administration that they sometimes bungled their language when navigating delicate foreign policy situations in North Korea or Afghanistan.

This brings us to the meat of Christie’s criticism — in his own words — that “we have ISIS and al Qaeda attacking us and we’re talking about fantasy football.” Despite occupying very different points on the ideological spectrum, Christie’s outrage was in the same spirit as the anger expressed by the Lincoln Memorial protesters who thought Nixon had come to them to discuss the Vietnam War, only to be regaled with tales about the University of Syracuse’s football program. For many Americans, football is more than just a form of entertainment or recreation, but a way of life deeply embedded in their cultural institutions and held in reverence by the bulk of society. As a result, it is easy to allow the bread-and-circus spectacle of football to distract them from issues that have serious real-world consequences — or, like Nixon, to understand why others wouldn’t feel the same way.

This overzealous passion for football can also cause serious ideological inconsistencies. Take Paul Ryan, the newly minted Speaker of the House, who as the Republican vice presidential candidate in 2012 stood on a staunchly anti-labor platform that he had helped design — but one which he temporarily abandoned by siding with the NFL referees’ union over the league during a strike, because the inexperienced replacements refs had cost his beloved Green Bay Packers a victory over Seattle Seahawks. (Ryan was joined in this by Wisconsin governor Scott Walker, who had built his political career on his anti-union bona fides, but called for the NFL to resolve the strike so that the quality of the game he loved would not be impaired.)

Even Christie’s own rebuke of the notion that Republican presidential candidates should discuss fantasy football regulation touches on this problem; when he argued that the focus should be on how to “get the government to do what they’re supposed to be doing” — and declared, “Enough on fantasy football. Let people play, who cares?” — he reminded the audience of the GOP’s ostensible “small government” principles — ones that should make the state’s stance on something as frivolous as fantasy football self-evident.

That said, it’s important that Republicans learn a lesson from the first president to have a meaningful relationship with football — future president Herbert Hoover, who managed Stanford University’s budding football team in the 1890s and famously forgot to bring the ball during their first Big Game with the University of California. While Hoover may have been embarrassed for neglecting his football duties, the party he later represented has often been guilty of the opposite sin, ranking football too highly among its priorities. The daily fantasy football controversy is perhaps a partial exception. Nonetheless, hopefully last night’s debate can start the process of offsetting this phenomenon.