Abortion and "Jane the Virgin": Ultimately, giving birth is the one choice that matters on this show

Like many shows and films, the telenovela often struggles to walk its pro-choice talk 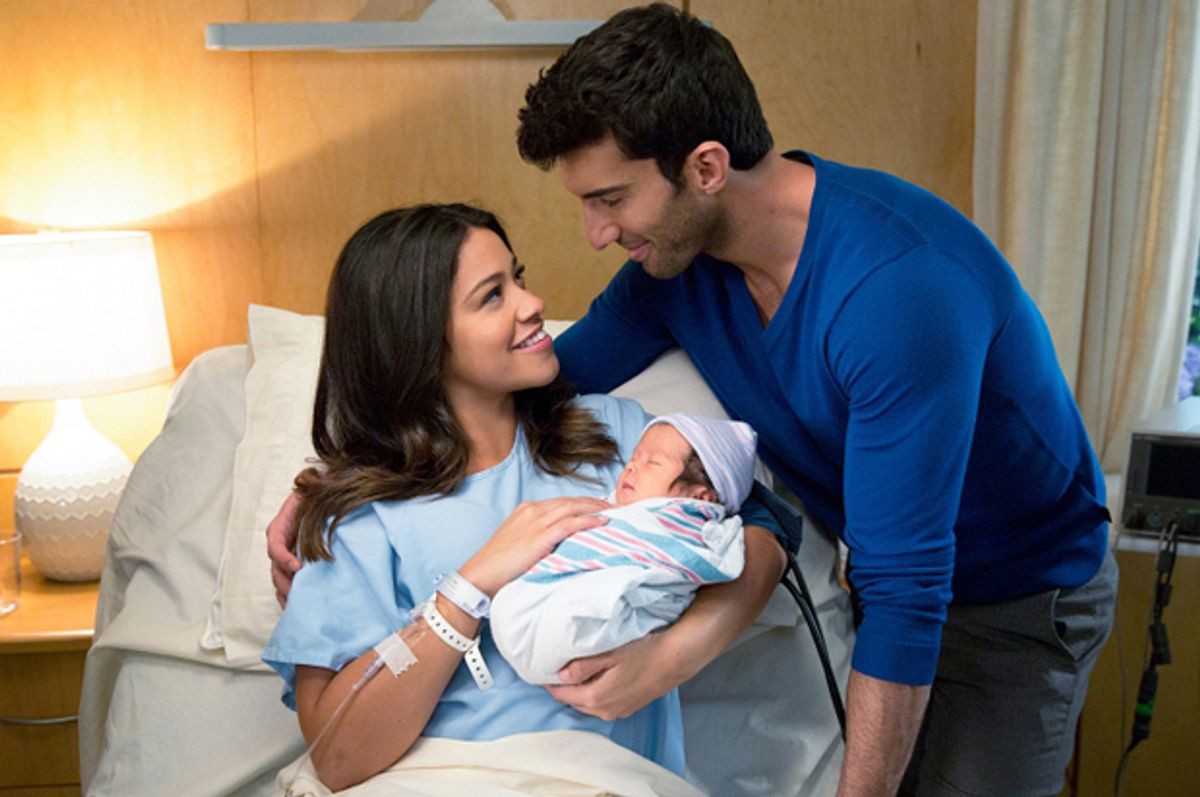 When it debuted in 2014, the "Jane the Virgin" was one of TV’s freshest and most unexpected surprises. The critically acclaimed dramedy stars Golden Globe-winner Gina Rodriguez as an aspiring writer who accidentally gets artificially inseminated after a hospital mix-up—and decides to keep it. This causes obvious tension in her relationship with Michael (Brett Dier) and a romance to blossom with Rafael (Justin Baldoni), the soon-to-be father of her child.

If this all sounds ripped from a telenovela, that’s because it is—the CW show was adapted from a Venezuelan program of the same name—but what makes "Jane the Virgin" so extraordinary is the way it treats the daily stresses of pregnancy and motherhood as just as noteworthy as Jane’s neverending love triangle. Last season found Jane struggling to prepare for the responsibilities of parenting, and this season has devoted entire episodes to breastfeeding and getting your baby to blink. This past installment found Jane trying to decide between being a stay-at-home mom and going to grad school, and the show emphasized that, for mothers, there is no wrong choice.

It’s an incredibly non-judgmental view of motherhood—in a culture that too often tells women that however you’re raising your child, you’re doing it wrong. (Hell, Kim Kardashian has been shamed for everything from how much North West cries to having swollen ankles.) But what’s disappointing is that "Jane the Virgin" is unable to show the empathy for all the choices women have to make about their bodies.

The show's pilot was lauded for its pro-choice depiction of a matter-of-fact conversation about abortion when Jane finds out she's pregnant, and later, for a conversation about whether or not Jane would terminate the pregnancy if tests showed severe abnormalities (she wouldn't, and they didn't). But in a recent episode, Rafael’s ex-girlfriend Petra (the fantastic Yael Grobglas) stole a remaining sample of his sperm (spoilers ahead) and drunkenly knocked herself up with a turkey baster. Petra asks his advice, which puts Rafael in a difficult position: Should he encourage her to have it “taken care of” or help his manipulative ex-wife raise a child he doesn’t want? Confusingly, the show emphasizes that it’s Petra’s body and her call, but abortion — in many ways, the least dramatic choice Petra could make here — is a non-starter. The Big A is treated as a dirty word.

While the misstep is disappointing, pop culture has long struggled with how to present a woman’s right to choose in ways that are validating and non-dismissive. In the late Adrienne Shelly’s "Waitress," Keri Russell never considers abortion, despite the fact that she’s in an abusive, loveless marriage. "Juno" dismisses the procedure after its titular character gets cold feet during her Planned Parenthood visit, after a pro-life protester tells her that her child has fingernails. In "Knocked Up," Katherine Heigl decides to raise a child with her one-night stand—despite the objections of everyone around her—for reasons that are unclear.

In a 2007 editorial for the Huffington Post, Lisa Wade called "Knocked Up" “pro-life ideology disguised by dick jokes”—despite the fact that, like "Juno" screenwriter Diablo Cody, its creator, Judd Apatow, is pro-choice. I wouldn’t say that any of these movies or shows are against a woman’s right to choose, but the issue is that they rarely present it as a realistic option. Cody argued that she intended to show the “human, teenage reasons” that someone might choose not to have an abortion, which is fair, but too rarely do we ever get to see the “human, teenage reasons” that a girl like Juno might choose to terminate her pregnancy.

However, a number of recent films have portrayed a woman’s right to choose in ways that are honest and reflect the hard decisions women have to make. Paul Weitz’s recent "Grandma" follows a young woman (Julia Garner)—one not much older than Juno—who asks her estranged grandmother (Lily Tomlin) to fund her abortion; because she can’t afford to help, the pair embark on a "Thelma and Louise"-style road trip to raise the money. Whereas "Grandma" emphasizes the financial burdens of pregnancy, the much-praised "Obvious Child" sets its abortion drama in the plot of a traditional romantic comedy.

Giving the buddy comedy and the rom-com a pro-choice twist might not feel revolutionary to some, but these films are incredibly important to women who might be struggling with the stigma of abortion. This is why Amelia Bonow and Lindy West started the #ShoutYourAbortion hashtag in September: to show women that it’s OK to talk about their experiences with the issue.

“The fact that even progressive, outspoken, pro-choice feminists feel the pressure to keep our abortions under wraps—to speak about them only in corners, in murmurs, in private with our closest confidantes—means that opponents of abortion get to define it however suits them best,“ West wrote in the Guardian.

West is absolutely right: The real danger of silence—whether that’s in TV, movies, or real life—is those against a woman’s right to choose are anything but quiet. In recent months, an ongoing Republican “investigation” into Planned Parenthood (following a number of viral hoax videos on the Internet) has sought to defund women’s health centers across the country, and it has worked. States like Texas and Ohio have already voted to cut taxpayer funding for Planned Parenthood, while states like South Carolina, Arizona, Kansas, Missouri, Louisiana, and Alabama have all considered doing the same. This would leave millions of women without local options for reproductive health.

Although I don’t expect "Jane the Virgin" or any other television program to take an explicit stand on that issue (although I wouldn’t complain), the show has a responsibility to show women everywhere that all of the decision they make about their own bodies are important and valid. A recent study found that 99 percent of all women who have terminated a pregnancy don’t regret it, and we need to show that abortions aren’t evil or demonic; for many women, it was simply right for them. If "Jane the Virgin" really wants to get motherhood right, it needs to recognize all the women who choose not to become mothers through abortion — not just theoretically, but for real — and remind us why that’s OK, too.