Cops joking about rape on Twitter: And people wonder why so many women don't report sexual assaults? 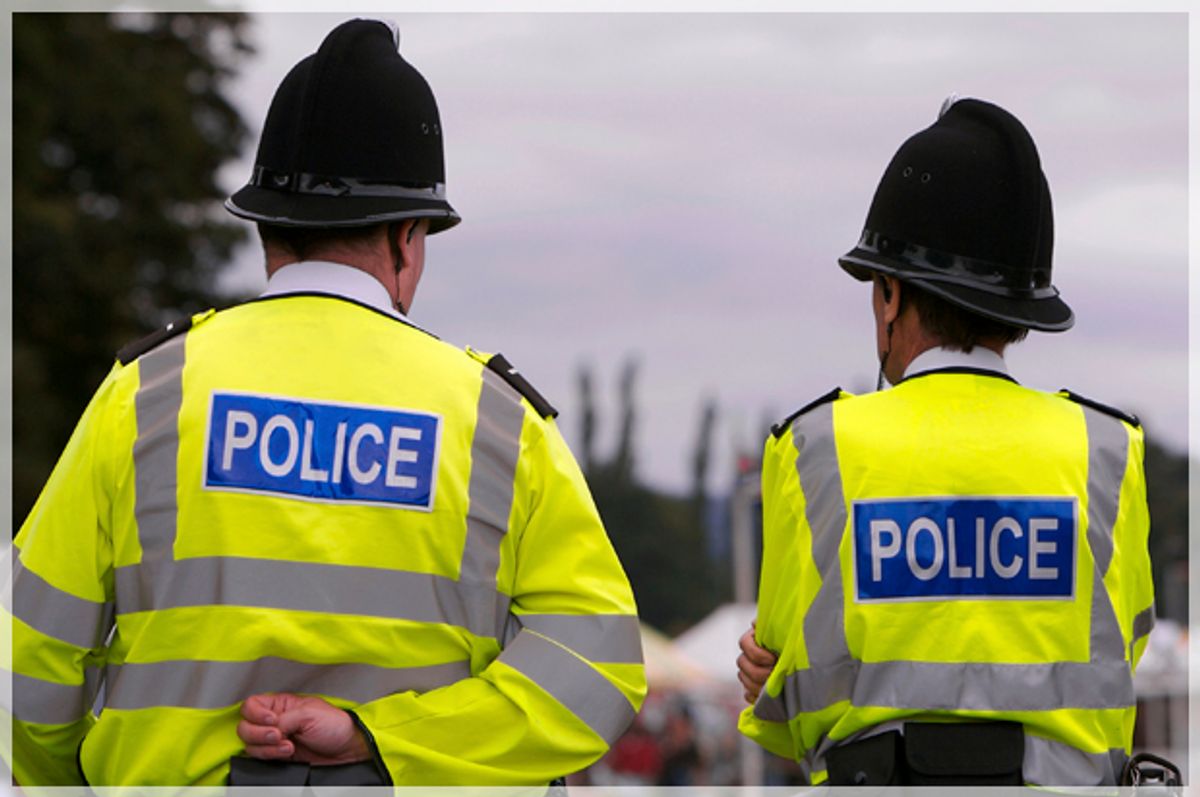 Here's some advice for the aspiring comedians of Twitter: Rape jokes in general are pretty tough to pull off. Rape jokes coming from cops? I'm going to say impossible.

In a wildly tone-deaf social media exchange  Sunday, the UK's Merseyside Police bantered with a football fan who compared a sporting defeat to sexual assault. After Everton's defeat of Sunderland, a user named Brandon (who appears to have since deleted his account) tweeted to @MerseyPolice that "I'd like to report an incident of rape that occurred at Goodison Park, Liverpool, on November 1st at 3:00." The official police account quickly replied back, "Just confirm there was no actual rape for me? Sunderland certainly got caught with their pants down though." Thanks for asking if there was really a rape before making a crack, folks. It didn't end there — another fan added that "I'd like to report an incident that's been going on for ages. Chelsea get raped every week, can you help?" The Mersey Police replied that "Afraid not, it's not a criminal offense to lose week in, week out." Hilarity!

Someone must have then pointed out to the cops that making light of rape isn't super appropriate behavior from law enforcement, because the tweets were then deleted, followed by a message: "We would like to apologize for any offense caused by inappropriate tweets from the force account this afternoon. They do not reflect the strenuous efforts made by Merseyside Police to investigate serious sexual crimes and protect victims. An full investigation has been launched into the inappropriate use of the Merseyside Police Twitter account."

And of course, that was then followed up by new outcry from Twitter users who thought the police shouldn't apologize to "humorless tossers" and who suggested to critics, "Lighten up, you stiff-arsed clowns."

There is no topic that is off limits in an actual comic context. Earlier this year, Amy Schumer — who has made great hay with the topic of rape in her own material — said that "Rape is good fodder for comedy because it’s the worst thing in the whole world, so it’s untouchable." If you're Amy Schumer, you can probably do this correctly. If you're a police force, no you can't.

The use of "raped" as a catch-all term for something bad and humiliating might, to some, seem just another stand-in for "crushed" or "kicked in the butt." Let me help you out: It's not. Writing in Alternet a full six years ago, Mikki Halpin noted that "raped" was becoming a shorthand "to describe experiences such as a sports loss, a poor score on a video game, or being on the losing end of a business deal…. Ironically, it may be the attention-grabbing power of rape that lends itself to its new use as a descriptor of everyday events." And she added, "A recent study at Western Carolina University found that such phrasings allow men to become comfortable with prejudice and express it without fear of negative consequences."

So remember, rape means rape, not a successful Hollywood writer having a rough season.

The problem of a casual joke tossed out by an official representative of a police force is that it reinforces the often entirely justified skepticism toward law enforcement that many victims already have. Last week, West Midland police admitted they'd called a suspected domestic violence victim as a "f__king slag” and "bitch" in a voicemail accidentally left for her. And last year, an alarming British report called "Crime Recording: Making the Victim Count" found that "26% of all sexual offenses (including rape) reported to police are not even recorded as crimes."

Writing in the Guardian, Laura Bates noted that "A fifth of decisions to 'no-crime' rape reports had been found to be incorrect…. For the worst forces investigated, this figure rose to two-fifths." Meanwhile, in the U.S., a 2014 investigation revealed that a New Orleans' special victims unit failed to investigate over one thousand sexual abuse reports over a three-year period.

Is it possible to make inappropriate jokes and carry out your job responsibly? Sure. But the fact that whomever was tweeting for Mersey on Sunday really didn't stop and think it through suggests a jadedness that is not doing much to foster public trust. It says that the investigation the force is now launching is a good idea, and that a little extra sensitivity training may be in order here. That's not capitulating to the "humorless tossers." That's cops doing their job — and their job isn't comedy.