Ralph Nader is being sexist again! This time the old crank attacks Janet Yellen on the interest rate 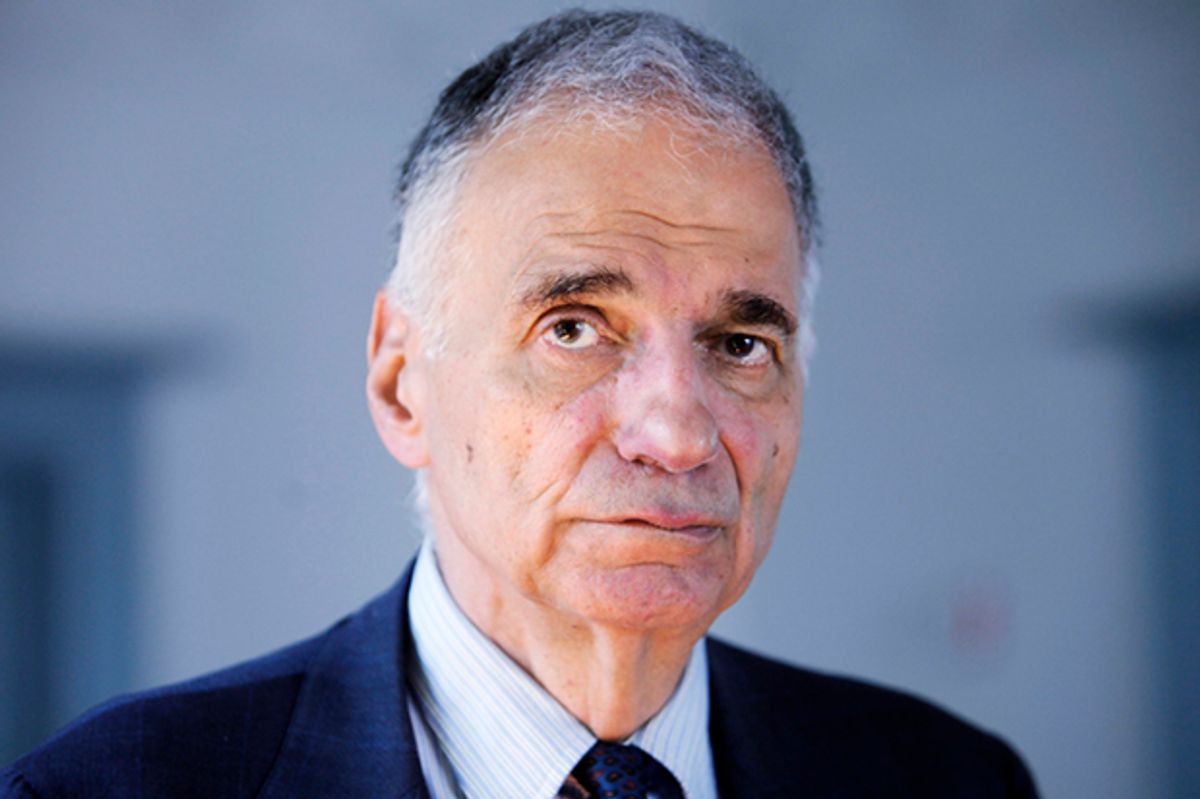 Apparently, Ralph Nader is still talking, though in a way that certainly inspires a deep desire to go to Tumblr to find as many "shut up" gifs as one can find. Over the weekend, Nader published a nonsensical piece at the Huffington Post complaining that "humble savers" are getting screwed by the Federal Reserve's unwillingness to raise the interest rate, which Nader seems to think is an elaborate plot to help the rich banks at the expense of working people.

As Jordan Weissmann at Slate points out, the entire argument doesn't make a lot of sense, as "relatively few households actually survive on interest income." Most ordinary people would benefit a lot more from a robust economy than a higher interest rate on their savings account, but Nader seems to assume a nation of people living on investments rather than on paychecks, which really undermines his spokesman-for-the-working-class schtick.

But this weird piece is notable not just because of its Old Man Simpson half-baked economic crankery, but because he offers a solid dose of sexism to go with it: "Chairwoman Yellen, I think you should sit down with your Nobel Prize winning husband, economist George Akerlof, who is known to be consumer-sensitive," Nader lectures. Yes, clearly interest rates are low because we live in a madcap world where women are not only allowed to run the Federal Reserve, but they are too willful to listen to the wise counsel of their husbands.

Akerlof is far from the only man that Nader suggests as the proper figure to slap some sense into this woman someone let run the Fed. Nader also offers up her friend Robert Reich as a male authority figure to tell her what to do. Which is funny, because Reich, as Weissmann points out, opposes hiking the interest rate. But hey, why let little details like that interfere with a neat little story about how a woman is supposedly failing at her job because she is supposedly failing to listen to the men in her life tell her what to do.

This bit of jaw-dropping sexism comes just a few months after Nader pulled a similar act with Hillary Clinton, who Nader also faults for not behaving how the thinks women should. On Larry King's show back in June, Nader let loose on Clinton, arguing that she somehow betrayed "the tradition of women of peace" and that Clinton shows a "shocking militarism that is a result of trying to overcompensate for her gender by being more aggressive and macho."

Jeb Bush tries to convince us that he eats nails for breakfast, but it's Clinton that is overcompensating. Got it.

You would think, listening to him, that Clinton is somehow more hawkish than the Republicans, which is so ridiculous it hardly needs rebutting. But his paranoia over this makes more sense if it's viewed in context of his fairly obvious sexism. Nader isn't comparing Clinton to her male colleagues and competitors. He's comparing her to a female caricature of pacifism in his head. Peacefulness is great---I wish Clinton were less hawkish, myself---but it shouldn't be gendered in this way. Nader's behavior is more about policing women for not being the gentle, submissive souls he expects than about sincere discussion of the issues at hand.