The "Homeland" is Israel now: How Showtime's uneven spy drama found itself again 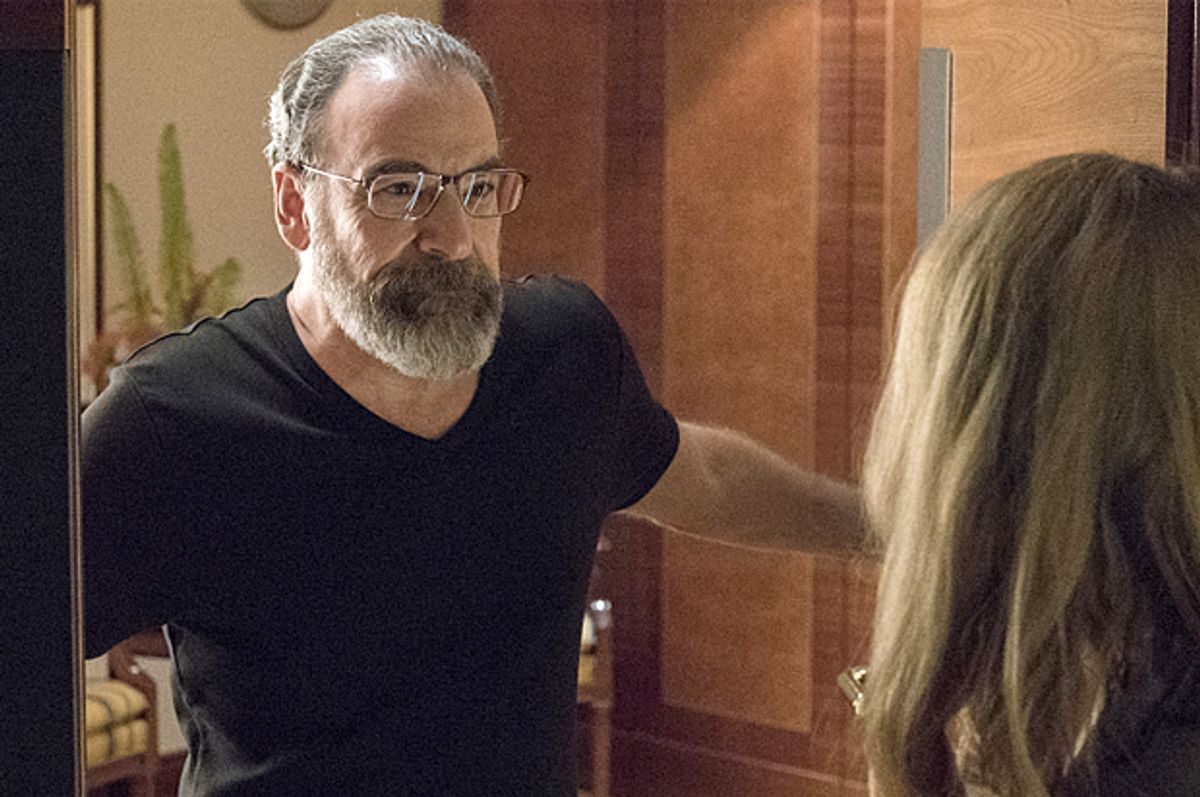 In the fourth episode of this season of “Homeland,” which aired two Sundays ago, Saul Berenson (Mandy Patinkin) celebrates Passover with his new girlfriend, Allison Carr (Miranda Otto), at the seder of an old friend in a warm, cheerful apartment in Berlin. It is a convivial gathering, made even more so by the religious significance of the holiday and that this Jewish celebration is occurring in Germany—where, the host Etai Luskin (Allan Corduner) reminds us, a tyrant much worse than pharaoh very recently threatened Jews. It might feel less complicated were it not for what is revealed as the scene continues, once seder is over: Etai is the Israeli ambassador to Germany, and affiliated with the Israeli intelligence agency Mossad. Saul and Allison are both highly placed in the CIA. And seder, perhaps more than usual, is a little strained.

In the years that “Homeland” has been on the air, it has often made much of belief as identity, particularly when it comes to Islam. But although Saul Berenson has long been one of its main characters, the show has not engaged all too seriously with Saul’s faith or religious identity, choosing instead to use him as one of the characters whose professional identity is separate from his religious one. That has changed in the last two episodes, as Saul’s identity has almost passively made him complicit in what Etai sees as a kind of betrayal. And as the episode continues, Saul’s support of Israel—again, however passive—begins to make him a target for those in the CIA who would bring him down, too.

“Homeland” is based on an Israeli show by Gideon Raff called “Prisoners of War,” and though the two shows have diverged dramatically since “Homeland’s" first season, the notion of a divinely granted homeland is one that both shows have worked to examine, through the eyes of many different characters of many different faiths. In the fifth season it’s finally coming home, in a way. This season “Homeland” is bringing Zionism front and center. By the conclusion of last night’s episode, “Better Call Saul,” the leading suspect for an aircraft bombing is Etai—and because of Saul’s connection to him, Saul’s now in jeopardy, too.

“Homeland,” over the past five years, has demonstrated surprising elasticity. At times, it’s almost too elastic, in a way that leaves behind what originally made the show so powerful and interesting. This fifth season is the most removed from the premise of the series yet, as former CIA analyst Carrie Mathison (Claire Danes) has decamped to Berlin, where she has a daughter, a partner, a non-intelligence job, and something like a normal life. That in itself is kind of a stretch of the imagination—there is no one who seems less likely to have a normal life than a bipolar woman who routinely goes on and off her meds, has an alcohol dependency, fell in love with and then had a baby with a terrorist, tried to drown said baby, faked time in an institution and was the subject of a congressional hearing just to perform an elaborate operation for her boss—and you know, that doesn’t even include the insane story line of season four.

Something of the original show has been lost, to be sure. (The cheeky title of last night’s episode, which nods directly to AMC’s “Breaking Bad” spinoff, is just one indication of how comfortable “Homeland” has gotten with being a long-running procedural that doesn’t take itself too seriously.) But at least one thing has been gained over the course of those occasionally brilliant, occasionally muddled seasons: a hard-earned cynicism of American intelligence infrastructure, the kind that is best sold by someone who used to be an integral part of it. Where Carrie used to be committed to advancing American security at nearly all costs—even when that drive regularly went counter to the top-down mandates of American bureaucracy and politics—as director of security for a global nonprofit, she’s neither involved with people who claim to be terrorists or the people who claim to stop terrorists, but instead with that third party of people who are just trying to survive in the middle of the world’s deadliest back-and-forth.

Indeed, what is striking about this season is that it is so completely removed from America, even though most of its characters are American. The season pivots around the acquisition and transfer of a cache of CIA documents that were acquired accidentally by amateur hackers. But five episodes in, what’s in the documents has proved to be far less significant than the desperate scramble to get ahold of them—a sad metaphor for national security if there ever was one. The flash drive with the documents is just the football in a scrimmage, except there are four teams on the field at once and you can use guns; and yet all this struggle for possession is in pursuit of a MacGuffin that itself, so far anyway, means nothing. The quest for cybersecurity is a different kind of homeland security, but “Homeland” suggests the process and results are just as bloody, just as costly and just as futile.

And fewer and fewer players in the game have any notion of what their own homeland really is. In what is the most Cold War-throwback espionage thriller move yet, one of the top-ranking CIA officials turns out to be a mole for Russian intelligence. That’s Allison, who in addition to being Saul’s clandestine girlfriend is the American CIA bureau chief of the Berlin station. In just one episode, Allison plays American, pretends to be German, stands on Swiss soil, negotiates with Syrians, and then answers the phone in Russian. This isn’t just a throwback to the Cold War; it’s at times straight-up World War II.

Allison is not coldhearted. As Joshua Alston observes at the A.V. Club, Otto gives Allison a full range of human feelings, which complicates and deepens her character. “Homeland’s" strength has always been in examining how Carrie and other CIA operatives develop relationships with the enemy they have sworn to fight against. For once, now that Saul’s marriage has ended (after years of tumult), it’s Saul’s turn to negotiate intimacy across enemy lines—just as soon as he figures out Allison is a mole, of course.

My colleague Anna Silman made a point after last night’s episode that I can’t get out of my head. “Homeland’s" appeal has always been that its lead character is an unstable but brilliant woman; in this season, for the first time, there are multiple female characters who have multiple shifting allegiances. It’s not quite as clear-cut as Fara (Nazanin Boniadi), an Iranian-American analyst who was a good guy until she was killed, or Tasneem (Nimrat Kaur), who was a bad guy until she double-crossed everyone and drove Carrie and Saul out of Pakistan. Here, Carrie is working sometimes with, sometimes against three different women who are all a great deal like her. The show underscores this by how similar all four look and dress—white, professional, middle-aged women, all of whom speak very good English. Competent Astrid (Nina Hoss) works in German intelligence, and much like Carrie, is apt to break the rules to follow her instincts. U.S.-critical journalist Laura Sutton (Sarah Sokolovic) is the only brunette of the bunch—and in last night’s episode, Carrie actually wears a brown-haired wig to go out to meet her. And high-ranking, sensitive Allison—playing a very long game with enemies she’s become too close too—is probably the most like Carrie of all. This is a show more committed to gray areas than ever, and to emphasize that, they’ve cast good, bad and neutral versions of Carrie in three supporting roles.

For the rest of the season, Carrie, Quinn (Rupert Friend) and Saul will be mucking around in Berlin trying to figure this mess out. Carrie thought she had a home here, but she didn’t; she sends her young daughter back to America to take her out of harm’s way. I get the sense from this season that just as the show is attempting to define what “Homeland” is going forward, it is also trying to find a homeland, of sorts, for Carrie Mathison.

For this fan, that is a welcome journey. Too much of "Homeland's" time has been spent frantically trying to stay on top of—and make sensational, at times—a national security conversation that is too broad and complicated for just one show. Narrowing its focus to these characters—and their homelands—forces the show to better balance the personal and the political, even when the people and circumstances involved are anything but ordinary. Without necessarily being the addictive show it once was, "Homeland" is offering up a taste of its former brilliance in season five. And if this season is going to treat Israel with the same scrutiny and sympathy that Pakistan, Iran, Germany and, of course, the United States have been subject to — well, "Homeland" might make for some very necessary and productive soul-searching.