The NRA wants us to live in fear: The demented, highly profitable and deeply cynical logic behind arming everyone

Corporations will make millions off chalkboards that turn into armor. Common-sense gun control would keep us safer 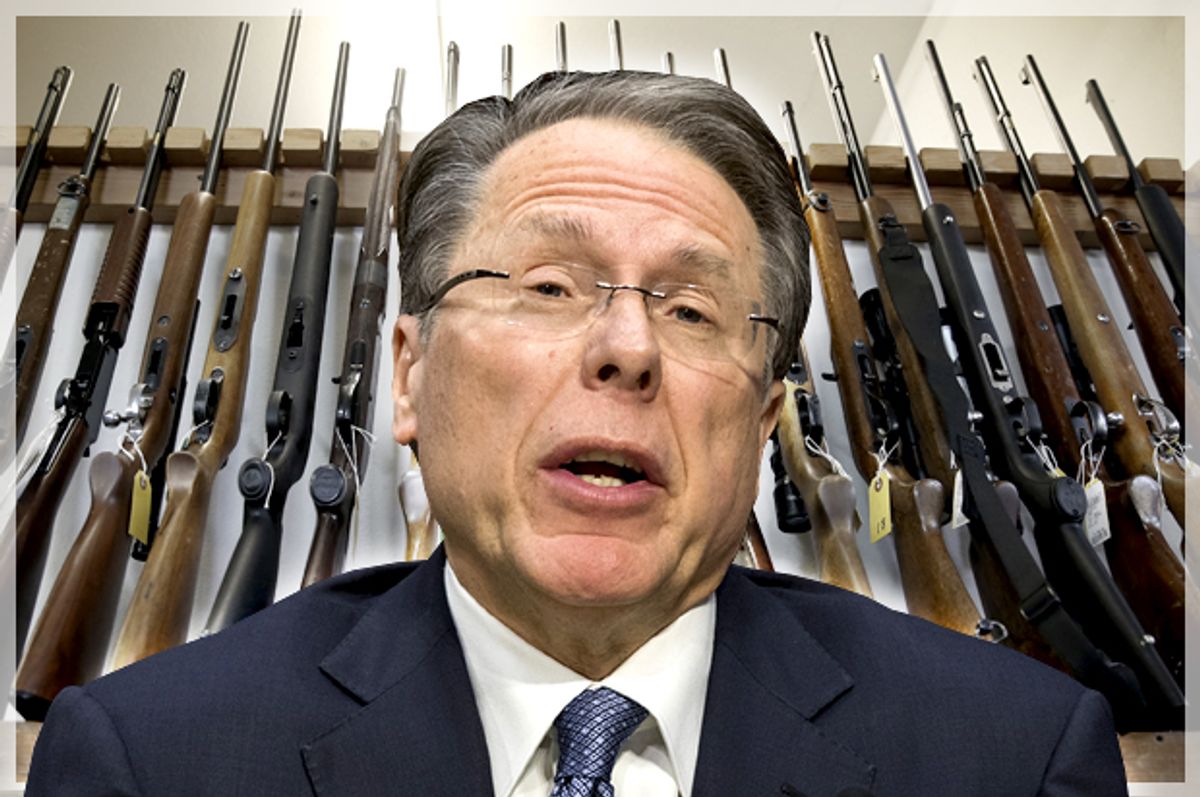 The shooting at Umpqua Community College may prompt schools to follow the example of the University of Maryland Eastern Shore, which purchased bulletproof whiteboards for its classrooms. Instead of gang-rushing would-be killers, as Ben Carson suggested, professors or students can instead rip these whiteboards off the wall mid-attack and deflect the barrage of bullets. Hardwire, LLC, a defense contractor based in Pocomoke City, Maryland, was happy to provide the whiteboards, and manufactures a variety of wares marketed to the education sector, including bulletproof clipboards for teachers and students, bulletproof shields and bulletproof inserts for backpacks.

In another line of its burgeoning business, Hardwire installed 52 pieces of armor in a Maryland stadium, “magnetically attached to beams and disguised as advertisements for local businesses.” In the event of a shooting, the pieces of armor “would come right down off the beams to offer protection.”

Naturally, this presents another opportunity to market to schools and colleges, each with their own stadium—some hosting major sporting events and thousands of people. Schools could simply start outfitting classrooms, hallways, gyms, auditoriums, cafeteria and the like with disguised armor, removable in the case of a mass shooting.

These products represent a new line of business for Hardwire, which had been busy providing armaments for the military. As the wars in Afghanistan and Iraq wound down, Hardwire’s CEO George Tunis explained, his company decided to look for domestic opportunities, and after the Sandy Hook Elementary shooting, saw an opening in the mass shootings here at home. Regarding worries that armaments in stadiums or schools might ‘spook’ people, Tunis replied that we should think of them just like fire extinguishers. “We used to have a bad fire problem,” he explained. “Now we have a bad gunfire problem. And that gunfire problem is a $33 billion industry. I don’t think it’s probably going away.”

Hardwire’s company website offers the following testimonial from a student: “The Sandy Hook shooting took place in a small town with a very low crime rate, much like our town… Now that we have [Hardwire’s bulletproof] shields, we have a feeling of security… This peace of mind makes our day to day lives… less worrisome and ushers in the normality (sic) we felt before the incident.”

To the contrary, bulletproof shields, whiteboards and backpacks indicate something quite other than a state of "normality." Why should it feel normal for us to inhabit a society that has all the trappings of a war zone? Does this mean we will have to contend with the various mental scars common in war zones—at least in some capacity?

As the president lamented after the Umpqua shooting, prospects for gun control are dim. Which is why the various armaments, such as Hardwire designs, are seen by some as the best option to protect against school shootings. This is the world the gun rights movement pushes on us, unwilling as it is to tolerate even the most modest gun control reforms.

To justify widespread guns, and loosened regulations, NRA CEO Wayne LaPierre declares that our society is rife with danger, nearly on the brink of disaster. In a letter to NRA members before last year’s elections, LaPierre warned of a host of looming threats and catastrophes, including terrorists slipping across our porous southern border, convicts released from overcrowded prisons, and thousands of illegal immigrants with criminal backgrounds, whom our government has seen fit to release into the general public. The NRA sees reason to fear and suspect everyone and anyone. And our schools and colleges, if the gun rights movement has its way, will reflect and reinforce the all-encompassing suspicion and deep cynicism of the gun rights worldview.

How we educate our youth plays a critical role in whether they are active, engaged and demanding citizens—such as democracy requires. The famed Brazilian education advocate Paulo Freire railed against the "banking concept" of education, where students are filled up with knowledge. Rather, he argued, the classroom must feature dialogue between students and teachers invested in a common task of inquiry. To put it otherwise, the classroom is a microcosm of a democratic society, where students instinctively learn to behave as democratic citizens.

This is close to American philosopher John Dewey’s idea that the main task of the classroom in a democratic society is socialization. Facts and skills can be learned in a variety of formats, Dewey maintained, but socialization can only be achieved in the classroom, among peers who are from different backgrounds and social classes. The crucial skill in a democracy is learning to work and communicate with diverse populations. Freire rightly intuited that such facility demands a fundamental openness on the part of students. Dialogue is the ideal for the classroom, and dialogue “requires an intense faith in man,” Freire writes, “faith in his power to make and remake, to create and re-create… the ‘dialogical’ man believes in other men even before he meets them face to face.”

Such openness and optimism is utterly alien to the gun rights outlook, and plan for our youth. The various ominous security measures with which it would outfit our schools send a chilling message to children about the outside world: it is a dangerous place—and, the NRA would like you to know, one should be armed to enter into it. The outside world is populated by deranged killers; everyone must be suspected. How is that message supposed to plant the seed for collaborative work and negotiation, commitment and hope to improve society, which our democracy requires?

Of course, the gun rights movement also claims we must have guns in the classroom to protect against mass shootings. If teachers or staff are armed, so the thinking goes, they can shoot the assailant before he attacks, or at least limit the bloodshed. Many school districts have followed the NRA’s recommendations. At the college level, nine states allow students and staff with appropriate permits to carry their weapons on campuses, and others are deliberating similar "Campus Carry" bills this year.

I am not optimistic about the message it sends to schoolchildren, that their teacher carries a gun, or stashes it in his desk. As a college professor, I find it quite chilling to think that any of my students might be armed. I realize I likely won’t see the weapons—they will be concealed. But still, knowing the weapons may be out there will likely weigh on the conversation, and possibly even add an uncomfortable electric charge to the classroom. At the very least—and of this much I am certain—armed students and staff do nothing to promote the pedagogical and civic goals of the university; if anything, they risk hindering said goals.

At the college level in America, professors are encouraged to cultivate a "de-centered classroom," where students lead the discussion—and feel emboldened to do so. This is an effective way to help young adults develop critical thinking skills; they must engage ideas quite personally, and take intellectual, moral and political risks. In the humanities classroom, we deem it our responsibility to entertain controversial ideas, ideas that are sometimes even offensive. They must be defeated in argument. But this means that emotions will occasionally run high. Is it outrageous to think that a student might reach for a gun if offended—or insulted or disrespected in the classroom? Consider that arguments between students at universities in Arizona and Texas earlier this month—the week after the Umpqua shooting, when gun rights advocates were calling for expanded Campus Carry—erupted into gunfire, with individuals killed in each incident.

Guns in the classroom will likely have another effect. For fear that they might offend and upset people, students may be less inclined to engage with controversial ideas and entertain risky arguments. The prospect of guns in the classroom may make students reluctant to speak out, and fear sounding too critical, or bombastic—or offensive. And professors may be less inclined to stoke debate on sensitive topics, for fear of what might come of it.

Of course, what’s worse is that none of the aforementioned "security measures" will provide much protection against committed and well-armed attackers. How is a teacher equipped with a bulletproof shield—or a gun—supposed to rebuff someone like James Holmes, the movie theater shooter in Aurora, Colorado, who killed 12 and injured 70? Holmes unleashed two tear gas canisters and carried three weapons with him, including a semi-automatic assault weapon with a 100-round drum magazine. Should we equip our teachers with assault weapons, too, in that case?

Of course, a shooter would first have to get past the armed guard that many schools have stationed in or near their entrances—or, in the case of my children’s school, he would have to deal with our newly installed Sally Port, the kind of entrance system, parents were informed, that is typically used in prisons. But a determined killer could simply shoot open a classroom window, or barge in a side door. Should we get rid of school windows altogether, then? Or outfit them with bulletproof glass? I am sure Hardwire could oblige. To truly deal with someone like Holmes, we would need entire battalions of armed guards stationed on school grounds—and preferably announce their presence with an armored vehicle parked out front.

This all sounds laughable, but it is the path the gun rights movement has set us on. Private contractors—indeed, the whole defense industry in America—would happily pave the way, transforming schools and colleges into fortresses. In the process, however, we degrade the learning environment for our children and young adults, and undermine the lofty goals we have set for them—and for our society at large.