The Stone Roses reunion freak-out: With 21 years since the band's "Second Coming," a new album could be worse than leaving well enough alone 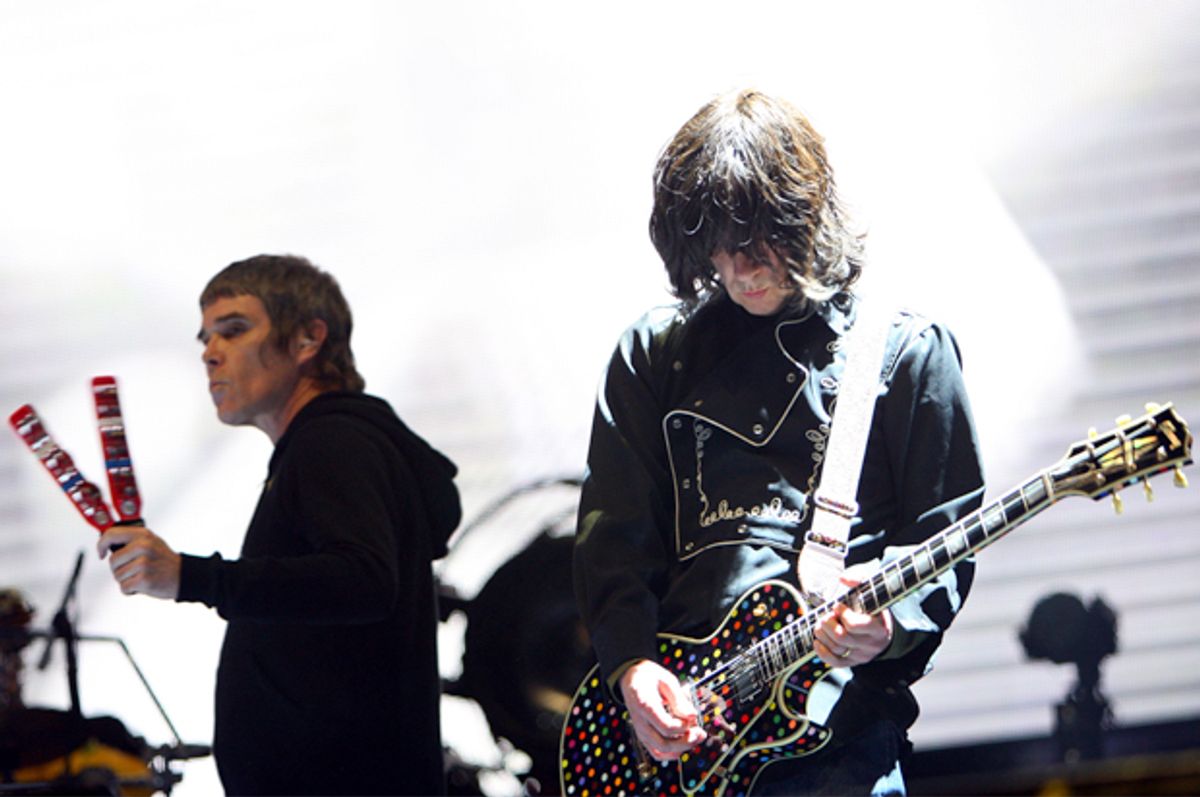 What’s coming next for fans of British indie rock could be either a crushing disappointment or the most exciting news in years. That’s the only sober way to look at a frenzy that began to build in the music scene in Manchester, the city that’s produced the Buzzcocks, Joy Division, the Smiths, Oasis, and – all too briefly – the Stone Roses.

Over the last few days, social media has been buzzing with snapshots suggesting a return of the band that electrified Britain in the late ‘80s and seemed poised to take over the world until a mysterious fade-out. As NME reports:

The snaps depict posters of lemons – the exact same kind that graced the cover of their self-titled debut album – which have appeared in select locations across the band’s hometown of Manchester.

This follows Noel’s Gallagher’s appearance on Soccer Am on October 24, when he was asked if he "any idea what's going on with the Roses". His reply: "Yes, I know exactly what's going on... They're blooming."

This blooming probably means either a tour or a new album. Why do people care so much about the return of a band that only put out two records and broke up two decades ago?

The Stone Roses may have the briefest of any great band in history. In the Unites States in particular, their moment was especially quick. At a time when the Smiths had broken up, and grunge had not much spread much outside of Seattle, the band connected to the energy of Britain’s dance club culture, especially acid house.

There were plenty of good bands in both the U.S. and the U.K., but the Roses seemed to have the ambition -- one of their best songs was called "I Wanna Be Adored" -- and the potential mass appeal to become huge. And their debut record, “Made of Stone,” was brash, fresh, and distinctive despite clear roots – both mid-‘60s British rock and a backbeat that drew from American soul and funk musicians like Sly Stone.

They could deliver intimacy (“Song For My Sugar Spun Sister”) or sweep (“Made of Stone,” “I Am the Resurrection”) or dance floor energy (“Fool’s Gold”) and make it all sound mysterious and grand.

Conquest of the United States – where they were still mostly known by Anglophiles and indie cultists – and a follow-up record were going to come next. But somehow, neither ever happened. Whether it was the band’s tussle with its record label at exactly the wrong time, drugs (Manchester bands were very fond of Ecstasy), the ego of lead singer Ian Brown, or the speed-of-light fickleness of British rock culture, they never quite came back.

The Roses’ 1994 album, humbly titled “Second Coming,” was conventional and entirely lacked the inventiveness of the debut. A member left the band; the band cancelled a tour and then a Glastonbury appearance for 1995. A year later, guitarist John Squire left the group, and within a few months the Stone Roses broke up.

But the band’s legend began to grow. When British music magazines put together lists of the best rock records of all time, “Made of Stone” started to sit at or near the top, up there with “Revolver” and “Blonde on Blonde.” The band’s following began to stretch from Gen Xers who’d owned a pair of baggy jeans to younger fans who were drawn in by the mystique.

The people still pumped up about the Stone Roses are excited that the original magic can return. We’ve been through this before, though, so fans are right to be a little cautious. In 2011, the band announced a handful of shows and 150,000 tickets sold out in 14 minutes, making them, according to the Economist, “the fastest-selling live act in British history.” But the shows that ensued mostly got mixed reviews and they hardly dominated Coachella, for example.

So: The band will announce something at 7 p.m. Greenwich Mean Time. And as someone who turned 20 the year “Made of Stone” came out, who went to school in England the year after, and who later made a pilgrimage to Manchester because of the city’s musical roots, my skepticism is balanced by a lingering sense of possibility.

But it’s impossible to guess with any accuracy what might come next. Whatever their talents and weaknesses, the Stones Roses were nothing if not erratic and unpredictable. And that – a handful of us are hoping -- may leave them still capable of greatness.