The wingnut myth that refuses to die: The one simple reason why there's no "liberal media conspiracy"

After last week's CNBC debate, right-wingers are yet again railing against the "lefty" media. Only one problem... 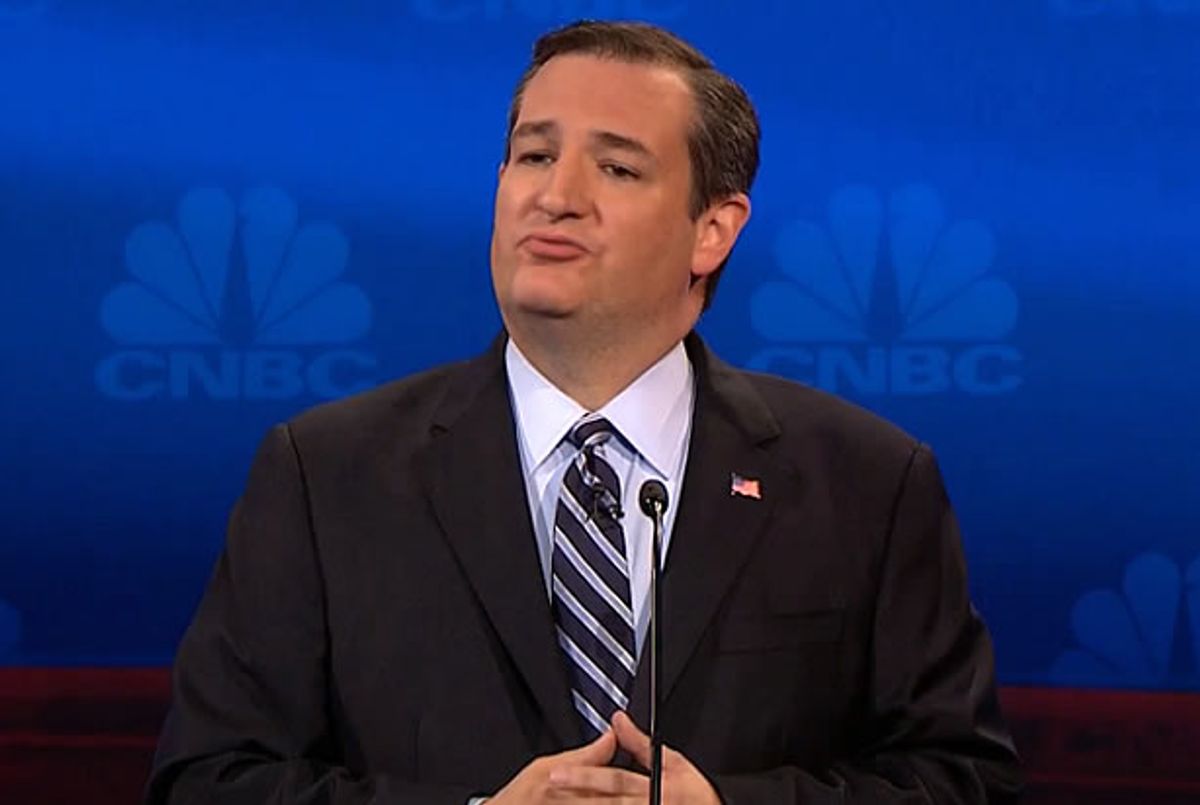 During the third Republican debate, the winning strategy was not in attacking Hillary Clinton or calling out the absurd policy plans of Donald Trump and Ben Carson, but in slamming the mainstream media as a left wing mouthpiece of the Democratic party. And since the debate, the GOP has gone berserk over CNBC  -- a business channel, mind you -- and it’s supposed liberal bias. The Republican National Committee has even suspended its partnership with NBC News for its February debate, because, as RNC Chairman Reince Priebus writes, “CNBC’s moderators engaged in a series of “gotcha” questions, petty and mean-spirited in tone, and designed to embarrass our candidates.”

Of course, the GOP candidates who were most vocal about the supposed media bias were really just using it to dodge substantive questions and get easy applauses from the partisan crowd. As Charles Pierce puts it in Esquire:

I have come to the conclusion that it is very easy to be a Republican presidential candidate. First of all, to paraphrase J.R. Ewing, once you give up truth, the rest is a piece of cake. Second, and most important, you really only have to memorize one answer.” (i.e it's the Liberal media!).

When confronted about his voting record in the Senate, Marco Rubio (R-FL) was quick to call out the media bias, after mentioning that President Obama had an abysmal voting record during his campaign as well. “This is another example of the double standard that exists in this country between the mainstream media and the conservatives,” he said, to a crowd of cheering conservatives. He even went on to say that Clinton has her very own super PAC in the mainstream media, a point that may have very well won the debate for the young conservative.

Seeing the advantage in attacking the much-loathed media, Sen. Ted Cruz (R-TX) responded to a question on whether his opposition to compromise on the debt limit shows he is not a “problem solver.”

“The questions that have been asked so far in this debate illustrate why the American people don’t trust the media,” said Cruz, who would use his time to trash the moderators instead of answering the question, “This is not a cage match.” He went on to mock the Democratic debate as a battle between the “Mensheviks and Bolsheviks,” which seems to imply that the media is not only liberal, but communist.

So, is the mainstream media really left-wing, or even liberal, as those on the right love to claim?

First of all, it should be noted that the real world tends to have a liberal bias -- at least what Cruz considers a liberal bias. Take climate change, for example. The fact that the climate is warming because of human activity is a completely uncontroversial notion; it is happening, and the vast majority of scientists agree that it will be catastrophic for humanity if nothing is done very soon. That the mainstream media does not contest the issue of climate change, or claim that it is some giant left-wing conspiracy, does not prove it is liberal, but that it is operating in reality. Cruz does not operate in reality, and believes climate change (i.e. science) is a “religion.” But just because Cruz believes this, or his deranged father, Rafael, believes that evolution is a communist lie, does not mean that evolutionary biologists are communists or that climate scientists are religious fanatics -- it means that Rafael Cruz and his son are delusional.

Now, before considering whether the mainstream media is really left-wing, one should look at who owns the media. Consider this: In 1983, 90 percent of American media was owned by 50 companies, and by 2011, that number had fallen to six companies: CBS, Time Warner, Viacom, News Corp, Disney and GE, which subsequently sold its media holding, NBC Universal, to cable giant Comcast (which would, in turn, later try to merge with Time Warner Cable, although that deal eventually fell apart).

Thus, the media at large has one crucial goal: to make a profit. Not to serve the public, but to make money by selling advertisement spots to other corporations, whether they are selling new cars or tech products or pointless new drugs. All of this profit-making hardly sounds like the socialist media that Republicans would have everyone believe.

One has to look no further than the coverage of Donald Trump to see this strategy in action. The Donald and the media have been feeding off of each other over the past few months. Trump loves the attention, and the media loves the “Yooge” ratings that he brings. (The higher the ratings, the more the network can charge for advertising or subscriptions.) CNN, for example, has covered Trump as if he were a natural disaster, and even bumped a 1oth anniversary special for Hurricane Katrina to cover one of Trump’s rambling campaign events.

Now consider the media coverage of the democratic socialist Bernie Sanders, who has drawn massive crowds to his campaign events and last month broke a fundraising record. The media largely ignored Sanders, and when it finally came around, after his popularity and poll numbers were too big to ignore, the coverage was full of bias and mischaracterization. As Rima Regas writes in Alternet:

“The most harmful way anti-Sanders media bias has been manifested is by omission. In this respect, the New York Times is joined by the vast majority of the mainstream media in not typically reporting on Sanders, especially on policy. Overall there is a version of a “wall of silence” built by the media when it comes to serious reporting and analysis of his policies; or when analyzing or reporting on the policies of his opponents, a failure to mention Sanders' in contrast, especially when his is the more progressive position.”

Why would the media, if it were so left-wing, be so active in its coverage of a right-wing populist like Trump, and so quiet in its coverage of Sanders? The reality is, of course, that the corporate media (a much more appropriate term than mainstream media) is not left-wing. Now, many conservatives argue that the majority of journalists support the Democratic party, which is true. But what does this prove? As Noam Chomsky (a real leftist) has previously pointed out:

“You could find that 99% of the journalists are members of the Socialist Workers Party, or some Maoist group, and that in itself would prove nothing about the media output. The issue is whether the media are free; are the media by their institutional structure free, to allow expression of opinion from whatever source, looking at any topic. If it turned out that 80% of the journalists were from one faction of the business party rather than another faction of the business party, would that tell you anything?”

Anyone who knows the history of left-wing politics understands that the media at large is not at all left-wing, but centrist at best. Again, just because the media lives in reality and does not dispute climate change, doesn't mean that it is liberal, but that the conservative faction of the GOP has become increasingly delusional in its extremism.

The corporate media runs for a profit, and wouldn’t dare advocate any true socialist policies that woulds inflict pain on its business model. Sure, the media at large supports issues like gay marriage — but again, what does this prove? Is it a plot to destroy America, as Ted Cruz’s cheerful father believes, or is it because America at large is becoming more socially tolerant?

Rubio and Cruz did well for themselves in bashing the abhorred media, but what does CNBC care, the ratings were great (though significantly lower than the first two debates), and the network made $250,000 for each 30 second commercial. And this, my fellow comrades, is what the corporate media is all about.