A social media star comes clean: "Everything I was doing was edited and contrived to get more value" 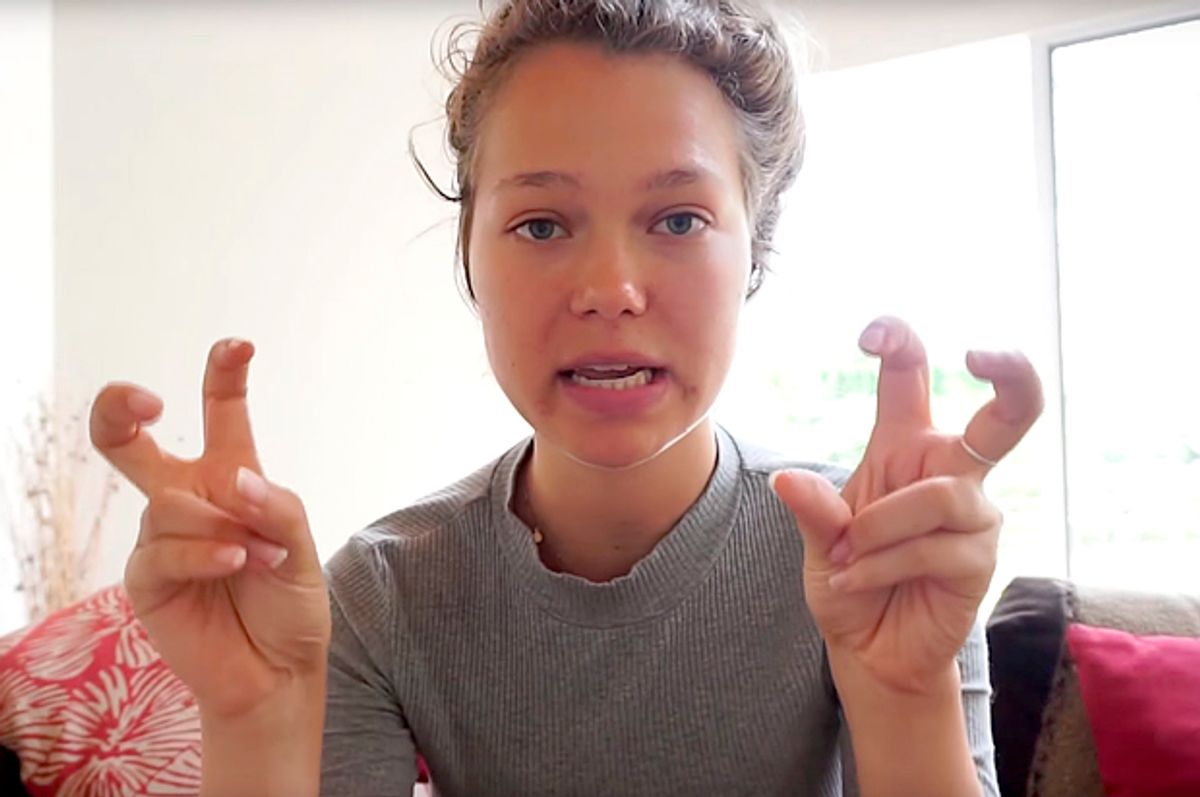 Essena O'Neill is Internet semi-famous. Over the past few years, the now 19 year-old Australian has racked up half a million followers on Instagram and over 270,000 subscribers on YouTube. She has parlayed her "vibrant visual diary of her healthy and happy life in the sun" into modeling offers and sponsorship deals. But she now says it was a carefully cultivated illusion, the kind that social media makes so tempting and so easy to maintain. And she says she wants to do something different.

Last week, she began telling her followers she was making changes. She now says she's deleted her Tumblr and 2,000 photos from her Instagram account that were mere "self-promotion." Her Instagram now tells the stories behind some of those original photos -- like a bikini shot she says is "NOT REAL LIFE - took over 100 in similar poses trying to make my stomach look good. Would have hardly eaten that day. Would have yelled at my little sister to keep taking them until I was somewhat proud of this. Yep so totally #goals." In another, she says, "Only wore workout wear for the photo. What does this inspire? To have to be tiny to be healthy? To have to be born into a genetically small frame and win the genetic lottery?"

In an emotional Monday video she claims is her "last ever" post to YouTube, O'Neill rails against "how fake it all is." Appearing barefaced and nervous, she says that "Taking myself off social media is a wakeup call to anyone and everyone who follows me. I had the dream life… To a lot of people, I'd made it… I was surrounded by all this wealth, all this fame, all this power, and I had never been more miserable. I'm the girl that had it all, and I'm here to tell you that having it all on social media means absolutely nothing to your real life…. Everything I was doing was edited and contrived to get more value, to get more views."

O'Neill now warns her followers that "When you're following someone and they have a lot of followers and they're promoting a lot of products, they are paid.… Companies know the power of social media, and they are exploiting it."

But she says that the reason she's doing her current about face isn't because of the corporate aspect; it's what living a life that increasingly revolved around the acquisition of likes and new followers was doing to her. O'Neill has now launched a new site called Let's Be Gamechangers, aimed at changing the relationship between users and social media. Her new goals, she says, include promoting her ideals of "real health," veganism, and love and connection. She also uses the site to look back on her own constructed image -- like examining a revealing photo she painstakingly created on her fifteenth birthday and noting, "Craving attention validated through social media I believe shows a gap in real life connections." She's now soliciting subscribers and, intriguingly, has a currently empty placeholder for "cool products." And naturally, as the Guardian reports, she's already receiving criticism for her very public — and instantly viral — move, as well as responses from other YouTubers disputing her account of her evolution. She wrote on a post added on Tuesday, "How ironic, the week I quit social media I receive 'my second fame'. All this backlash saying 'She's fake, hoax, attention seeker.'"

Social media can be an amazing outlet for storytelling and social change, and it can be a trip to Troll Town with a side of empty validation seeking. There may not have been a truer sitcom moment this year than Billy Eichner on "Difficult People" admitting to checking his social media account "Like I’m f__king pressing for medication in a hospital." Plenty of people a lot older and far more obscure than O'Neill grapple regularly with how to manage our online lives without falling down the sludge hole of Internet toxicity. It's hard work. It's good when someone reminds us of that. What O'Neill does next appears to be a work in progress. But she seems to have already figured out a key component of a healthy online life when she says, "For those who seek light (real happiness), you'll never find it in social approval, for that in itself is an illusion based on artificial ideas and emotions."