Jimmy Fallon's falls aren't funny anymore: If the rumors are true, he needs help, not laughs

After the latest mishap involving a bottle of Jägermeister, Fallon's legendary party lifestyle is under scrutiny 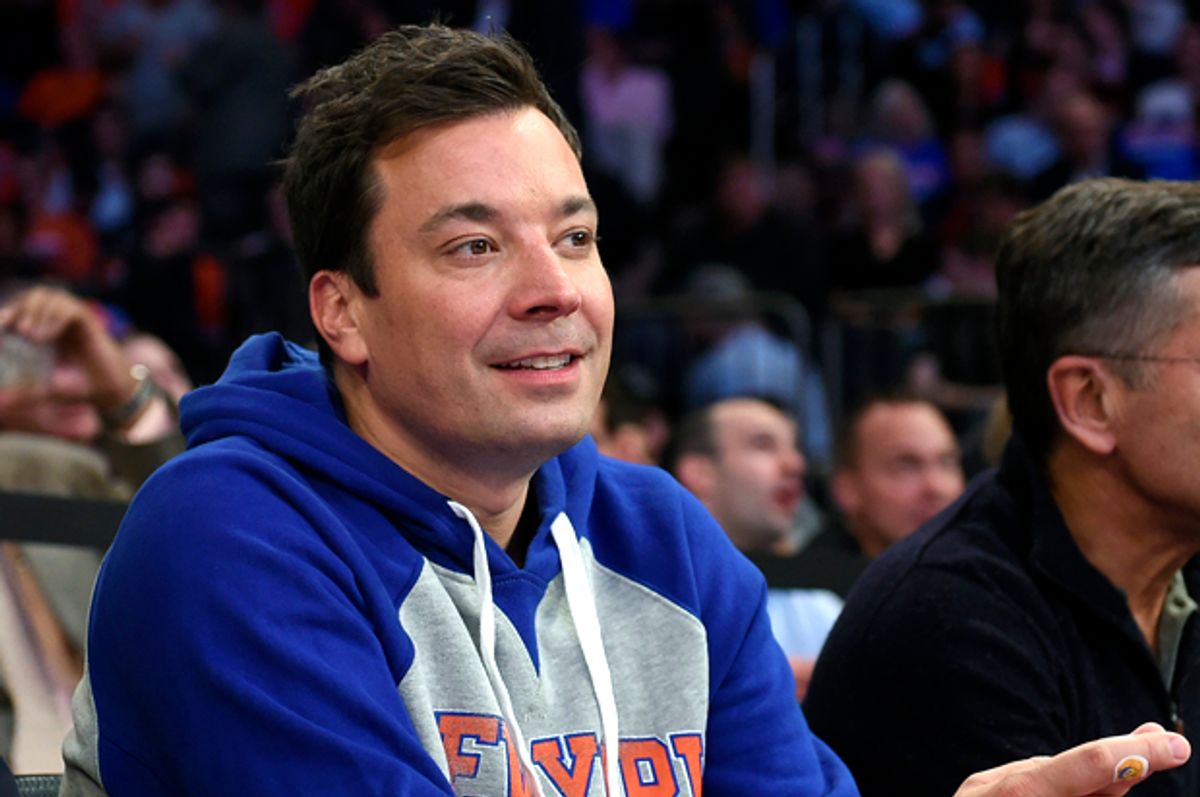 On the list of perils most working, 41-year-old fathers of two young children usually don't have to concern themselves with, you'll find the phrase "Jägermeister-related injuries." But in late October, "Tonight Show" host Jimmy Fallon, in Boston to accept Harvard University’s Lampoon award, took a fall and cut his hand. He was treated briefly at Massachusetts General Hospital and soon after posted a photo with the message, "Nothing that a few band aids couldn't fix." A Vine of the accident shows him in the midst of a crowd, taking the bottle in his hand and then going for a tumble. Variety reports he came back to the celebration after being released.

On his show, last week, he explained that "Somebody gets me a bottle of Jägermeister from inside and I'm out on the street. Apparently some girl was going to kneel down and give me a flower, so she knelt down, I didn't see her and then… This hand is already gone, so I just threw the bottle and then I landed on broken glass." By Monday, he was back in regular form, doing an eager-to-go-viral soap opera sketch with Bryan Cranston on his show.

Fallon has been on an unusually accident-prone run lately. In June, he injured his other hand so badly in a fall that NBC had to scrap the "Tonight Show" taping for the day — right before the show went on vacation hiatus. He underwent surgery and later told his TV audience, "Basically, what happened was I tripped and fell in my kitchen on a braided rug that my wife loves and I can’t wait to burn to the ground. I caught my fall and my finger went sideways. I get up and am like, 'Did I just break my finger?' This is the lamest thing in the whole world, it looks fake — it looks like a cheap horror movie." He said he suffered "ring avulsion… if you Google it there are graphic images. Basically, my ring got caught on the countertop when I was going down, and it got stuck there and pulled my finger off."

And he added, "I must say, the fall was funny. I am a comedian so I have to fall funny. If it was me watching me, I would laugh."

A photo reportedly from earlier that evening shows him at Italian restaurant Scalinatella with fans and glasses of wine. In August, shortly after extending his "Tonight Show" contract, Fallon shared with fans he'd "Chipped front tooth trying to open tube of scar tissue repair gel for recovering finger injury."

Inevitably, when a celebrity experiences that conspicuous a string a mishaps, rumors are bound to swirl. This week, the New York Post quotes a source at NBC saying concern that "Fallon’s drinking has become excessive" has "gone from being a whisper to a chatter." Last year, Fallon was spotted dispensing shots at a Chelsea bar. And back in January, a reportedly intoxicated Fallon was filmed at West Village gay bar Marie's Crisis, "knocking back shots and singing along with the crowd" to the theme from "The Greatest American Hero."

A 2014 Vulture profile of the then-new heir to the throne once held by self-professed "drunk every night" late night king Johnny Carson quotes Fallon's former "Saturday Night Live" castmate Horatio Sanz describing them in their "SNL" days as "super-functioning alcoholics, definitely." In the course of the story, writer Jada Yuan notes that Fallon tells her he "still loves drinking but can’t do it as much as he used to, what with his metabolism slowing down and the baby and the daily responsibilities of having a talk show" -- right before downing "a hangover in a glass" a group of fans have sent over. And in the story, comic Seth Herzog adds, "Everyone in New York has a Jimmy Fallon story. It’s always like, 'In 2000, Jimmy threw this dude out of a bar, or poured his beer on someone, or got on a table and sang a song.'"

It's 15 years later, and based on that Marie's Crisis footage, Fallon is still climbing on tables and singing songs. The Post reports that Fallon is seemingly aware of his reputation — the paper talks to photographer Sam Jones, who shot "Late Night's" all male collection of hosts for Vanity Fair's October issue. In the image, Fallon's the only one not holding a drink. (James Corden is abstemiously holding a juice box.) Jones says Fallon told him, "I don’t want to have a drink in the picture." A official source from NBC would only tell the Post, "Jimmy Fallon is a highly valued member of the NBC family who is both a tireless worker and an extraordinarily gifted performer." A local bartender says, "He’s a mess," adding, "I love him."

What's going on in Fallon's accident-prone but still private life is still a matter of speculation. But if it turns out he needs help, it likely won't affect his popularity. In March, "Mad Men's" Jon Hamm finished 30 days in rehab, and issued a statement that "Life throws a lot at you sometimes and you have to deal with it as much as you can." Over the summer, John Stamos entered rehab following a DUI arrest, and by September, he was promoting his new sitcom and telling the press, "I took advantage of the time and I made a choice, and I'm just so grateful that I did." The public is kind to genial, well-liked middle-aged male stars, kinder than it is to most. It laughs off their escapades when they fall down. But more than that, it roots hard for them to get back up.