Quit it with the secret KKK rumors! Modern-day racism doesn't come in a hood

The Internet is on fire with totally implausible claims of secret KKK membership. But modern racism isn't hidden 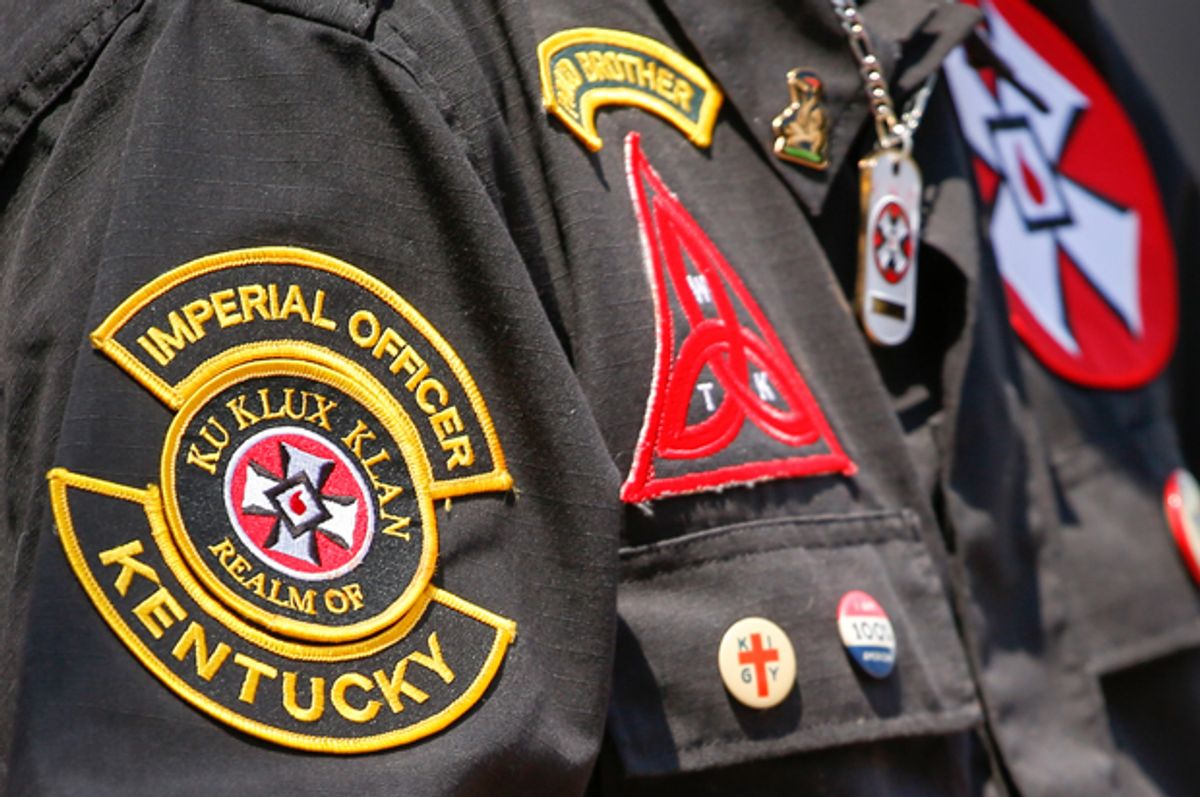 Is there a secret cabal of politicians and leaders who are in the KKK? Uh, no. And yet, here the Internet is, trading in rumors and speculation about secret KKK members, all based on an impossibly complex story about different online factions claiming to be "Anonymous" and dropping Pastebin documents claiming that every old white person under the sun spends their weekends under the hood.

The online chatter has grown to such a volume that respectable journalists, including Salon's own Scott Eric Kaufman, are now having to pinch their noses and wade into the muck, explaining the allegations and counter-allegations in painstaking detail. It's confusing, but it seems that both an Anonymous-affiliated and rogue group are claiming to have lists of KKK members to release to the public. The rogue group (who may just be one dude) struck first, releasing a list of highly implausible names, including four U.S. senators. Now the Anonymous-aligned group is distancing themselves, claiming to have a more authenticated list coming later this week.

And now the Internet, and Twitter especially, is all a-twitter. While most journalistic outfits are making sure to specify that there's no real evidence here, many leftists and liberals on social media aren't being so careful, treating the allegations like they are fact. Or even just plausible. To which I say: Have y'all lost your collective minds?

This is a dumb story. It's rare that you come across a story that's so implausible that you can dismiss it out of hand without further investigation, but this is definitely one of those times. The KKK was a powerful organization with a national network that operated in semi-secrecy and had ties to major leadership in this country, sure. You know, back in the '20s. Or even the '60s. But while there are still 72 active KKK organizations in the U.S., it's a disparate, dare I even say nostalgic (for racists) organization. They can commit localized acts of hate and even terrorism, but they don't put people in Congress, folks.

Just because the KKK isn't really what it is was doesn't mean that racism is over, to be very clear. Racism is alive and well in this country, as any Black Lives Matter activist or someone who can read basic statistics on incarceration or poverty can tell you.

Modern-day racism, however, tends not to fly under the white hood but through more subtle, if just as effective means. You don't have politicians yelling "segregation forever!" in 21st century America, but you do have politicians pretending that we have a voter fraud problem whose only "solution" seems to be to make it harder for black people to vote. Open, race-based discrimination has been replaced by systems that claim to be color-blind but disproportionately affect people of color. The KKK isn't a thing anymore, but we do have police who, while claiming to treat all people equally, end up abusing black citizens more than white ones.

Even more overt racism tends to come wrapped in a blanket of plausible deniability. The Confederate flag---and nostalgia for the Confederacy in general---is quite obviously about white supremacy, and yet most defenders of the flag claim that they're just into "Southern pride" and aren't racist at all. Putting on the white hood, however, removes all doubt.

Racists in America, 2015, cling to their cover story of color-blindness. A lot of them have even convinced themselves. Openly admitting to being a white supremacist is just not much of a thing anymore. Even people who were accusing Barack Obama of being born in Kenya like pretending they're going to vote for Ben Carson to prove they aren't racist. Most people who make racist jokes would throw a tantrum if you suggested that they might have had racist motivations, rather than just a desire to be "edgy." Modern racism is complicated, drenched in deniability, and focused more on suppressing people through economic and criminal justice systems than through overt discrimination.

Even racist terrorism, of the sort the KKK used to perpetuate, is different now. It's often more individuals soaking in racist messages from the internet and through coded mainstream racism and choosing, on their own, to act. The Charleston shooting is an example of this: No KKK needed when racists online can just hint broadly, knowing someone will get the idea.

The popularity of this rumor is frustrating, because, generally speaking, it's conservatives who relish spreading implausible stories to demonize their opponents: Planned Parenthood sells baby parts, Obama is secretly Kenyan, gays are trying to recruit your children. Paranoid accusations of secret conspiracies is really the right wing jam. Liberals are better off avoiding that nonsense completely.

After all, there is plenty of real world racism to be worried about without going off on tangents about a secret KKK. Right now, we have major presidential candidates using threats of "urban crime" and dark tales about supposedly evil immigrants to whip up the I'm-not-a-racist population. Racists don't need a white hood to spread their message of hate. They just need a good cover story---how they're tough on crime or against "dependency" or whatever bullshit they're trotting out today to justify continuing policies that disproportionately hurt people of color. Let's keep the focus on that, instead of on weird rumors about secret Klan membership rolls.