The corporate religion of Carly Fiorina: Inside the hyper-capitalist worldview that ignores our very recent history 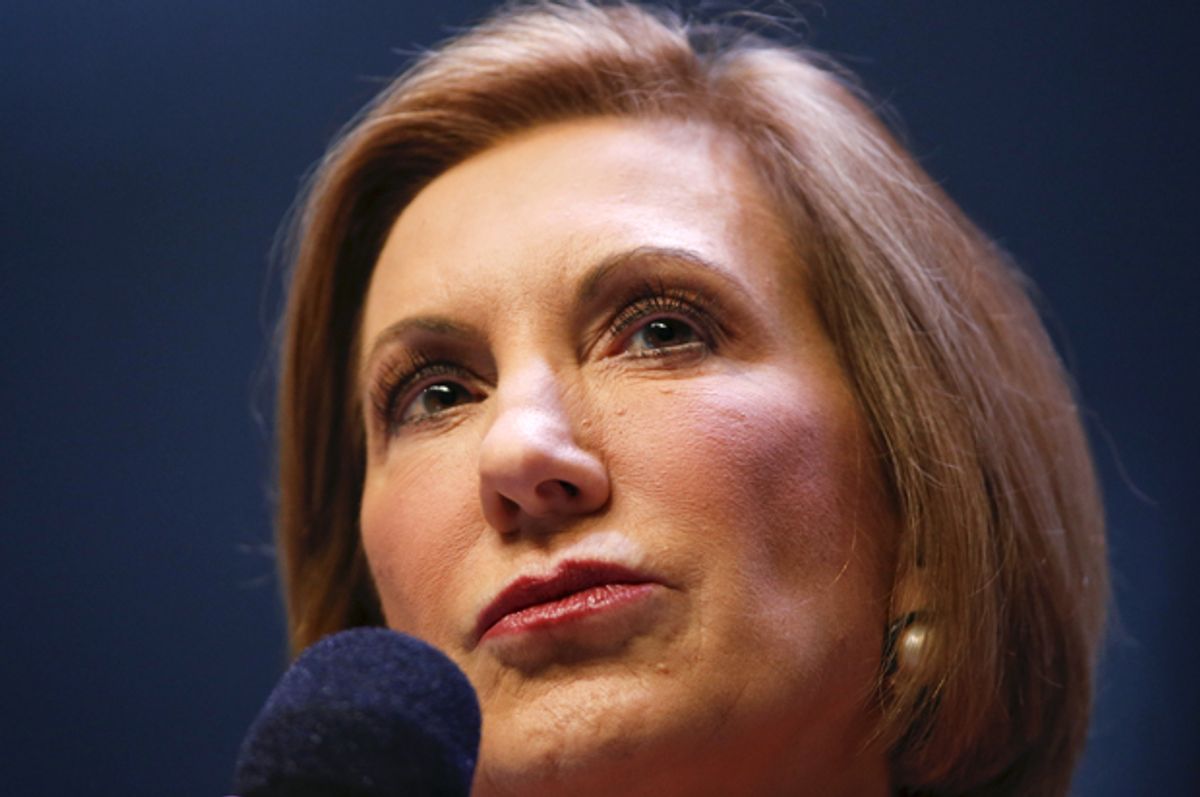 While bashing the mainstream media was the most effective strategy of the third Republican debate, the former CEO of Hewlett Packard, Carly Fiorina, went for another Republican talking point throughout the night, and blamed the government for pretty much every imaginable problem facing the country today -- particularly for crony-capitalism and the the rise of too-big-to-fail banks.

“Crony capitalism is what happens when government get so big and so powerful that only the big and powerful can handle it,” said a lecturing Fiorina, “Why are there five even bigger Wall Street banks now instead of the ten we used to have on Wall Street? Because when the government gets big and powerful, the big feel like they need to get even bigger to deal with all that power, and meanwhile the small and the powerless, in this case, 1,590 community banks, go out of business. You see folks, this is how socialism starts: Government starts a problem and then steps in to solve the problem.”

Government! Socialism! Nothing will get a Republican crowd more fired up than an ominous warning of the coming wave of socialism. Of course, government did help create the too-big-to-fail problem facing us today, but not because it became so big that the banks had to somehow match it in size. This is the kind of simpleton reasoning one would expect from some philosophizing freshmen smoking a joint in their dorm room, not a presidential candidate.

While bank consolidation over the past few decades has many causes, the size of the government is not one of them. Indeed, it was the governments decision to deregulate the financial industry -- a bipartisan effort in the ‘90s -- that has most certainly led to banks merging into the financial behemoths that they are today. There are two major pieces of legislation that unquestionably helped usher in an age of consolidation: the Riegle-Neale Act of 1994, which expanded interstate banking, and the Gramm-Leach-Bliley Act of 1999, which repealed Glass Steagall, permitting commercial and investment banks (and insurance companies) to merge into massive financial institutions (i.e. too-big-to-fail). The Vice Chairman of the FDIC, Thomas M. Hoenig, spoke on the history of increasing consolidation in a speech at the North Carolina Bankers Association Convention last year.

“Around the time of the last crisis, in the mid 1980s, states began to permit branch banking,” noted Hoenig. “Hundreds of banks failed during that period, and to provide a mechanism by which failing banks could be acquired by other banks as a means to continue local banking services, state agencies and legislators expanded bank branching privileges within and sometime among states. Over time, the federal government expanded and extended branch banking in a series of legislative actions, eventually permitting full nationwide interstate banking by 1997. There can be little doubt that this development has been a major contributor to industry consolidation.”

The Gramm-Leach-Bliley Act, also known as the Financial Services Modernization Act, was passed in 1999. President Clinton signed it into law on the advice of his economic advisors, most notably Treasury Secretary Robert Rubin, the former CEO of Goldman Sachs, who would later move on to Citigroup (which had been the first massive merger between banking and insurance companies, one year before Glass Steagall’s repeal) after leaving the treasury, where he would earn over $120 million in compensation. As Dan Roberts wrote in The Guardian last year:

“A Financial Services Modernization Act was passed by Congress in 1999, giving retrospective clearance to the 1998 merger of Citigroup and Travelers Group and unleashing a wave of Wall Street consolidation that was later blamed for forcing taxpayers to spend billions bailing out the enlarged banks after the sub-prime mortgage crisis.”

These deregulatory actions eliminated rules that had kept the financial industry relatively stable over the previous seventy years.  Republicans tend to ignore this history, and point solely to Dodd-Frank, the regulatory legislation introduced in 2010 to crack down on risky behavior in the financial industry, as the main killer of small community banks over the past few years. It is true, of course, that small banks face disproportionately higher burdens in compliance costs than big banks, and this has played a part -- albeit minor -- in the decline of smaller banks. “The banking industry has been required to absorb a host of new rules and requirements that translate into a rising fixed cost of regulation,” said Hoenig in his speech on consolidation, “These costs include lawyers to interpret the regulations, along with training, hiring additional staff for implementation, and reacting to risk of violations. Like any fixed or nearly fixed cost, its impact per dollar of assets declines with asset size.” While this is one of many factors, the rapid consolidation of banks started decades before Dodd-Frank (as the aforementioned regulations were done away with), and as Kate Davidson reported in the Wall Street Journal last month, low interest rates have been a much bigger challenge for small banks than Dodd-Frank.

Now, for Fiorina and her Republican friends, the solution to crony-capitalism and the rise of too-big-to-fail banks and financial instability is for the government to simply step out of the way -- because it does, after all, create all of our problems. But this is absurd and ahistorical, which is scary, considering the history isn’t even really history yet -- we all lived through it.

One of the most prominent economic commentators who had wholeheartedly supported the financial liberalization of the ‘80s and ‘90s, The Financial Times’ Martin Wolf, has been “honest and brave enough to say that his pre-crisis views were wrong,” as Felix Salmon put it in the Times. The financial crisis destroyed the neoliberal optimism that had engulfed both Democrats and Republicans during the final decades of the 20th century, and to deny this is rather ridiculous.

And yet, Republicans are still convinced by their free-market fundamentalism that it was all the governments fault -- even though the government had gotten out of the way of big banks and allowed them to gamble freely in derivatives and merge into too-big-to-fail behemoths. (It was the governments fault in a sense -- it didn't do nearly enough!) If Republicans had their way, they would throw out Dodd-Frank entirely and let the unregulated financial market go back to work. If the definition of insanity is indeed doing the same thing over and over again and expecting different results, then Republicans are surely insane.

An obvious solution to the corruption that has poisoned Washington would be to impede the flow of big money into our political system -- but don’t expect Fiorina or any of her Republican cohorts to propose such a thing. This would infringe on the “freedom” of billionaires, after all. The GOP is a party of old ideas that have been proven erroneous time and again. It is not a surprise that each Republican debate has been full of outright lies and half-truths. This is the logical result for candidates who claim to be fighting for the middle class and then go on to promote policies that have been proven to help billionaires and corporations. The GOP's free-market fundamentalism is nearly as bad as its Christian fundamentalism, and Fiorina's senseless abhorrence of all things government reveals just how extreme the party has become.