The GOP primary jumped the shark: How Republicans' debate freakout revealed them for the babies they are

Is a debate not moderated by Sean Hannity a tool of the "liberal media"? If you live in the right-wing bubble it is 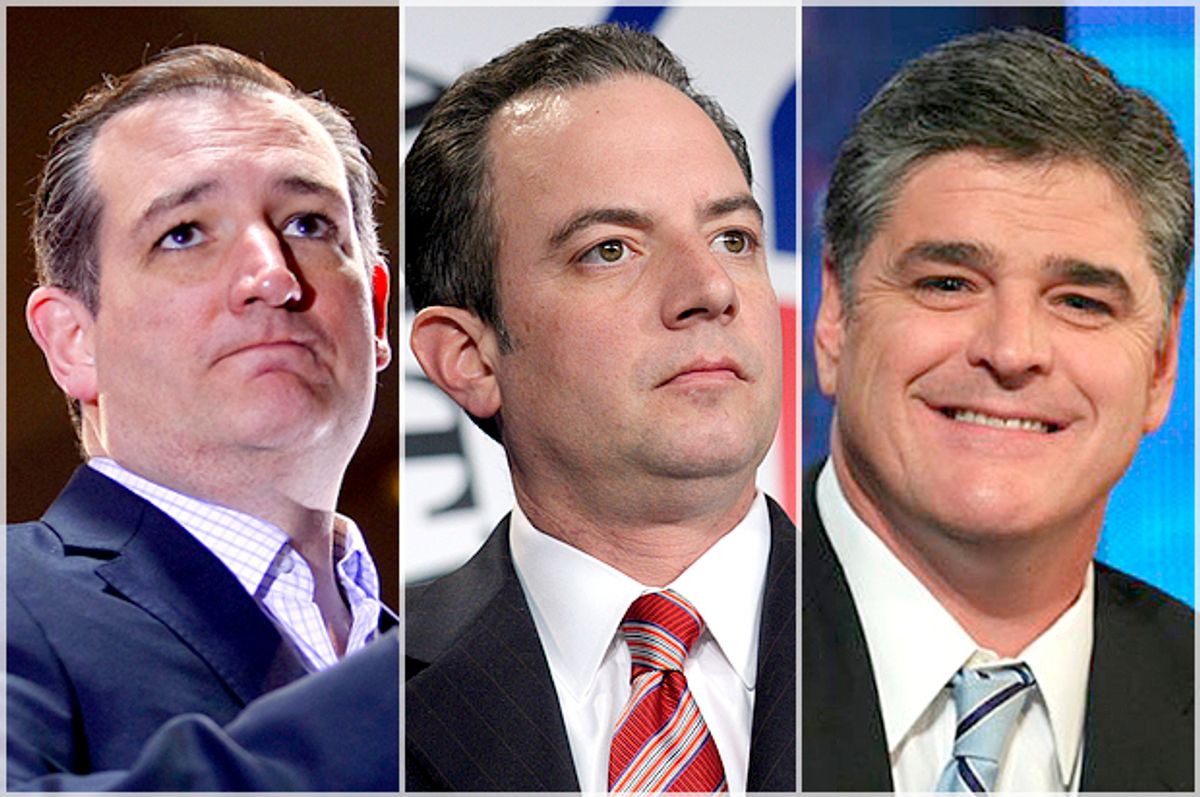 We've all seen it happen. Bite into an apple then leave it on the counter for a few minutes and the exposed fruit appears to rot. So it went with the Republican candidates during last week's CNBC debate. The epistemically closed conservative bubble was once again breached on live television, and the GOP field is acting like whiny diaper babies in the aftermath of the telecast, not because the questions were unfair but because their ludicrous ideas were exposed to the air.

The viability of Republican policies in the post-Bush era rely greatly upon the unquestioning support of the conservative entertainment complex, not to mention low-information voters who are so filled with anti-Obama, anti-Clinton rage the details of alternative plans are irrelevant in the face of a completely irrational demand for anything else.

Hence, we get Donald Trump's massively impractical immigration plan. His supporters don't seem to care that deporting 12 million people is impossible, while immigrants unlucky enough to be ensnared by Trump's goon squads would be frog-marched back to Mexico in a visual spectacle resembling some of the worst chapters in human history. Combine that with his border fence featuring, somehow, one "big beautiful door," and it's a plan so ridiculous that it might as well include jetpacks made of beef for all border patrol agents. (Trump: "My jetpacks made of beef will be terrific! Believe me!") We also heard about a spate of equally loopy GOP tax plans -- including Ben Carson's biblical "tithing" tax plan. Each tax plan balloons the deficit more than the other, even though every single candidate denies it in the face of nonpartisan scoring. Ted Cruz's tax plan, for example, involves submitting our tax returns on postcards. Where do we send the postcards? No clue. Cruz wants to abolish the IRS, there'd have to be a replacement agency to collect the cards and the tax-due payments, then enforce the tax law against anyone who refused.

Indeed, another bubble-only myth being circulated by the GOP is that CNBC is basically the same as MSNBC, even though it's demonstrably not. Anyone who's watched 10 minutes of CNBC on any given weekday knows that CNBC is, at least fiscally, more right-wing than anything else on cable news. But when Cruz, Carson, Huckabee and Trump were backed into a corner by moderators who rightfully nailed them on their hocus-pocus chicanery, they fell back on the tired old GOP crutch: They're the poor, poor victims of the evil liberal media.

(The GOP often likes to victim-blame, except when they themselves play the victim. To paraphrase an old GOP trope: Maybe the Republican candidates were asking to be attacked by parading around in skimpy, provocative tax plans.)

Consequently, ever since the CNBC debate, the Republicans have been going ballistic over the lack of fairness and substance offered by the allegedly liberal moderators, even though they rolled out equally vocal gripes about Fox News Channel moderators, especially Megyn Kelly. The reality is that CNBC moderators might actually be more conservative than Kelly. Prior to Kelly, paleoconservative radio talker Hugh Hewitt asked very difficult questions of the candidates on his show, exposing Carson in particular as being totally out of his depth on foreign policy.

Nearly a week following the debate, the whining continues. On Monday, Republican operative Ben Ginsberg drafted a letter for the various networks hosting future debates. In the letter, the RNC made the following demands (per Mediaite):

--Will you commit that you will not:
1) Ask the candidate to raise their hands to answer a question
2) Ask yes/no questions without time to provide a substantive answer
3) Allow candidate-to-candidate questioning
4) Allow props or pledges by the candidates
5) Have reaction shots of members of the audience or moderators during debates
6) Show an empty podium after a break (describe how far away the bathrooms are)
7) Use behind shots of the candidates showing their notes
8) Leave microphones on during the breaks
9) Allow members of the audience to wear political messages (shirts, buttons, signs, etc.). Who enforces?
--What instructions will you provide the audience about cheering during the debate?
--What are your plans for the lead-in to the debate (Pre-shot video? Announcer to moderator? Director to Moderator?) and how long is it?
--Can you pledge that the temperature in the hall be kept below 67 degrees?

They forgot one thing: no green M&Ms backstage. Time for another hissy-fit from Ted Cruz.

Meanwhile, late last week, RNC chairman Reince Priebus threatened to pull out of the next NBC News debate in February, noting that the National Review will remain a part of the event. It's all well and good to hang onto the National Review, but since it isn't a television network, and since both NBC and, apparently, Fox News Channel have been accused of being meanies, who knows where the debate will actually be broadcast.

Ben Carson, who still can't explain how his tax plan will work in the real world, demanded longer opening and closing statements, ostensibly because answering hard questions is hard. Ted Cruz demanded that future debates be moderated by friendlies like Sean Hannity and Rush Limbaugh:

"What you wouldn’t have is a bunch of left-wing operatives whose object is that whoever the Republican nominee is, they want him as battered and bruised as possible so the Democrat wins in November. Instead you’d have moderators that were trying to help conservatives make a decision who’s going to be the best and strongest conservative to represent us and win, who is the proven conservative, the consistent conservative."

Cruz added, "You know, how about we stop letting left-wing liberals moderate Republican debates? How about instead of a bunch of attack journalists, we actually have real journalists?" Yes, real journalists like Limbaugh. That's all we need to know. And again, CNBC is absolutely not a liberal network with liberal hosts. Neither is Fox News. That's two of the three debates, and I don't recall a lot of bitching after the CNN debate. Again, inside the bubble, the CNBC and Fox News debates were moderated by "left-wing liberals." This is exactly why Cruz can get away with such nonsense, even though the rest of us, outside the bubble, know he's talking in gibberish.

But OK, Cruz can have Hannity and Limbaugh, and maybe Hillary Clinton should've demanded that the Benghazi hearings be conducted by Michael Moore and Dan Savage.

Speaking of which, there's really no better contrast between the whining on the GOP side and the comparatively presidential stature of the Democratic front-runners. Clinton, for her part, powered through 11 hours of testimony before a mostly hostile Republican panel of congresspersons without a single letter or gripe in its aftermath. Conversely, the Republican presidential field wasted a solid chunk of their CNBC debate throwing crowd-pleasing tantrums about John Harwood, of all people, and how very cruel he was being to them by asking about their records and policies. For a pack of tough guys who've spent seven years impugning President Obama's masculinity and patriotism, they themselves obviously can't withstand the harsh Klieg lights of known badass ... John Harwood? Haven't we heard for several years now about Vladimir Putin's bare-chested, horseback-riding virility?

How do the Republican candidates expect to us to believe they could stand up to Putin, Assad or ISIS if they can't handle tough questions from Megyn Kelly?

Seriously, here's a major suggestion for the GOP campaigns: Instead of worrying about cruel moderators or the debate "props" or the locations of the bathrooms, how about coming up with policies that don't sound utterly insane to anyone who isn't Steve Doocy and Brian Kilmeade. Doing so would solve a lot of problems, including the actual implementation of the policies when and if one of these clowns happens to be elected. Instead of borrowing tax plans from the Bible, and instead of turning to puddles of quivering goo when faced with scrutiny, how about acting like candidates who can withstand the unmitigated rigors of the presidency. If they seriously think John Harwood was too tough to manage without chucking the debate board-game across the room and storming off, we've ultimately learned all we need to know about whether they can handle the job. They clearly can't.