America's post-Citizens United dumpster fire: How the campaigns are blowing holes in what remains of campaign finance law

Five years after SCOTUS opened the floodgates, GOP and Dem campaigns find new and exciting ways to mock the FEC 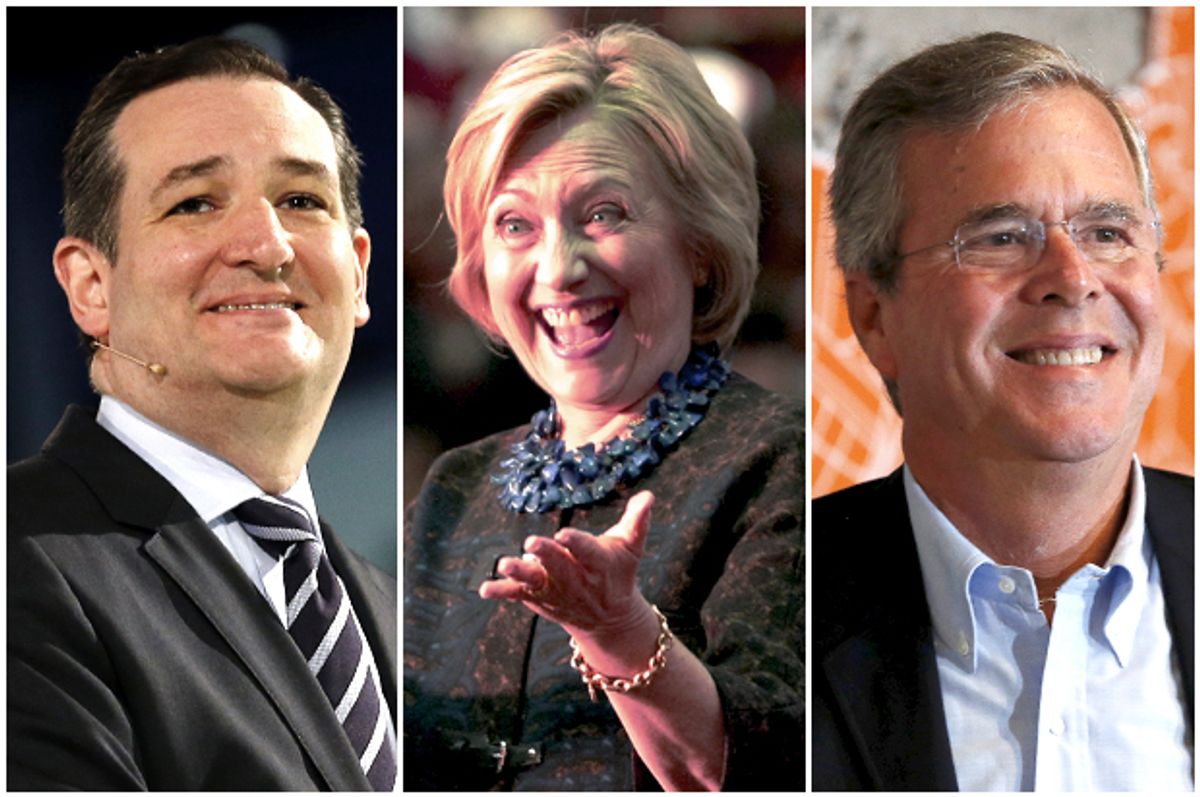 Ever since the Supreme Court ruling in Citizens United turned corporations into people and transformed political donations into a form of protected speech, the very notion of campaign finance regulation has come to be viewed as a sad joke. The Federal Election Commission is, by its own admission, a toothless and weak agency hobbled by partisan infighting. And even if it weren’t, the regulatory structures surrounding campaign finance have been so efficiently dismantled that the laws that still exist are vague and loophole-ridden to the point that proper enforcement is damn near impossible.

Not surprisingly, eliminating the threat of proper enforcement has emboldened campaigns and outside spending groups to develop new and exciting strategies for circumventing the laws that still exist – most notably, the laws banning “coordination” between campaigns and outside groups that advocate on their behalf. With just about a year to go until Election Day, let’s take a look at which campaigns have been the most creative in flipping the bird to the Federal Election Commission.

Before Jeb Bush declared himself an official candidate for the presidency in June, he spent six months “deciding” whether he was going to run. During this extended period of decision-making, Jeb told anyone who would listen how utterly consumed he was by doubts and uncertainty – “I hope I run, to be honest with you,” Jeb told CBS’s Bob Schieffer two weeks before announcing that he was, in fact, running. While he was “deciding,” Jeb was also putting together his campaign team and building out infrastructure and refining his message (he even slipped up once and referred to himself as a candidate). But most significantly, he exploited the “decision” period to raise unlimited funds for his super PAC, Right to Rise, which he would be legally prevented from doing as an official candidate.

He was, by any reasonable assessment, already behaving as a presidential candidate for a good portion of that “deciding” period, when he helped his super PAC build up its war chest. But he got around the law by lying and saying he just wasn’t sure if he was running. That extra fundraising matters now that Jeb’s campaign is in the toilet and will rely more and more on Right to Rise to keep him in the game.

Speaking of Jeb’s campaign being in the toilet, one of the more significant bits of information to emanate from that flailing enterprise was the recent leak of a comprehensive strategy document detailing pretty much everything Jeb’s team plans to do from here through the end of January. The document, which was leaked in parts (and then as a whole) to reporters was a road map and schedule for campaign activities and expenditures. It contained messaging details, and it laid out preferred strategies for attacking Jeb’s chief rivals. You know who would find that document extremely useful? Right to Rise, which is legally prohibited from discussing any of that information with the campaign. But now it’s all out there for everyone to see, and Jeb’s super PAC can adjust its schedule and messaging to fit more snugly with that of the campaign’s and not have to worry about violating laws prohibiting “coordination.”

Using the press as a go-between to pass messages between campaign and super PAC is emerging as a popular method for obviating campaign finance law. Politico published a piece this week chronicling the frustrations within Ted Cruz’s campaign over the lack of spending thus far by Cruz-affiliated super PACs. It’s full of anonymous quotes from Cruz campaign officials urging the outside groups to kick things into gear. “I assume they’re waiting so their media buyers make the highest commission,” one Cruz person snipes. But the best part of the piece deals with the “hours of unedited, glowing testimonials from Cruz’s family” that the Cruz campaign posted on YouTube as “a public plea for the super PACs to use the footage” in ads. Since those ads haven’t been made, an anonymous Cruz official told the super PACs (using Politico as an intermediary) that the campaign will use it if they don’t. “We’re going to tell some of those stories, not just the footage that we put out but footage that we shot here recently.”

There’s no “coordination” there – just a few anonymous Cruz campaign people saying some very specific words to a press outlet. And if someone at a super PAC should read them, well, they certainly can’t be blamed for that!

Correct the Record’s “what does ‘coordination’ really mean?” strategy

While the Republicans are sneaking about and coordinating through intermediaries, the pro-Hillary Clinton super PAC Correct the Record has opted for a less secretive strategy – it’s coordinating directly with the campaign and arguing that it’s found a loophole in the law, which it intends to aggressively exploit:

But Correct the Record believes it can avoid the coordination ban by relying on a 2006 Federal Election Commission regulation that declared that content posted online for free, such as blogs, is off limits from regulation. The “Internet exemption” said that such free postings do not constitute campaign expenditures, allowing independent groups to consult with candidates about the content they post on their sites. By adopting the measure, the FEC limited its online jurisdiction to regulating paid political ads.

Correct the Record’s explicit strategy is to further muddle the already tangled remnants of our campaign finance regulations and make it possible for campaigns and well-funded independent groups to work in concert.

And that’s just a fraction of what we’ve seen thus far. There’s still a year to go before the voting starts, which means there’s a lot more time left for campaigns to figure out newer and still more creative ways to show just how debased our campaign finance system has become.