On the surface, Ohio's vote against recreational weed might seem like a defeat. Look closer, and it isn't 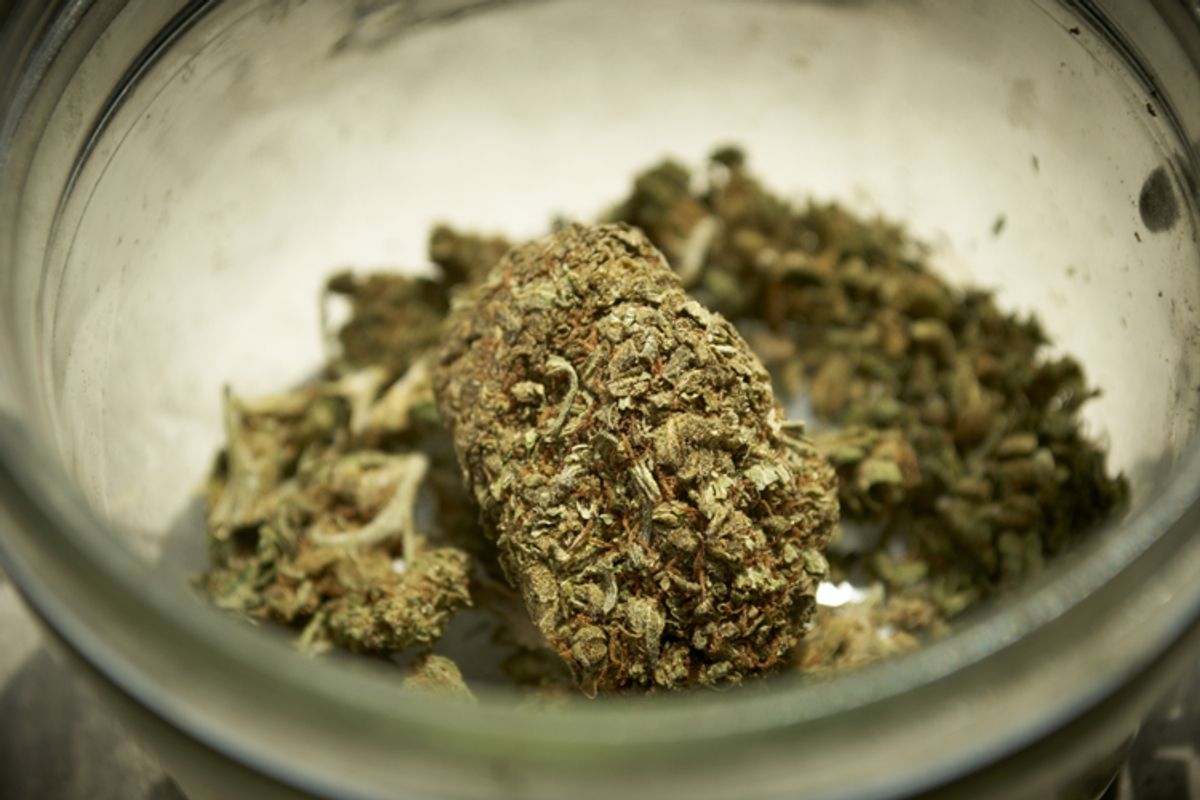 A bid to legalize marijuana in Ohio and put production in the hands of a private oligopoly was yesterday defeated -- nay crushed -- by voters who refused to drink wealthy investors' crony capitalism-laced bong water. Issue 3 would have legalized marijuana but limited commercial production to 10 particular sites that are controlled by the measure's financial backers.

The measure was so cynical it is still almost as hard to comprehend as the investors' mascot, an absurd asparagus-like creature that was supposed to be a marijuana bud. Part of investors' effort to take legalization "from the tie-dye to the suit-and-tie approach," the thing looked like the sort of malignant spirit that might have appeared in Maureen Dowd's edible-induced fever dream. It took pot smokers for complete idiots.

The defeat of the proposed amendment sends a message to opportunistic ganja-preneurs nationwide that the march toward pot legalization will face resistance even from pot smokers if hijacked by corporate interests. Ohio's apparent passage of Issue 2, a constitutional amendment that will make it hard to write corporate monopolies into the state constitution, makes that clear.

Pot legalization advocates no doubt wish that Ohioans had an opportunity to vote on a reasonable measure and likely aren't thrilled with today's "Ohioans reject legalizing marijuana" headlines. A slim majority of Ohioans appear to back legalization, and it would have been the first state to legalize recreational marijuana without having first legalized medical marijuana. Enough pot supporters just got the message this wasn't the right way to do it. Legalization advocates plan to put a non-oligopoly-enshrining measure on next year's ballot. Issue 3 investors also say they'll be back too.

Colorado, Washington, Alaska, Oregon and D.C. have legalized recreational marijuana. Legislation to legalize has been introduced nationwide and activists are moving to get questions on 2016 state ballots. Fifty-three percent of Americans back recreational legalization, including 68 percent of millennials, according to a Pew survey released in April. An October Gallup poll puts overall support at 58 percent and 71 percent amongst 18 to 34 year olds. Bernie Sanders, who also embraces an increasingly and surprisingly popular thing called socialism, has now called for the end of federal prohibition. Its becoming clear that while many young people love smoking weed, they are often profoundly skeptical of the super-rich.

The politics of marijuana legalization, and of ending the drug war more generally, have a lot more to do with a larger battle over economic philosophy than one might imagine. While libertarians on the right and civil libertarians on the left all back pot legalization the two sides have very different ideas of what role the state should play in regulating the resulting marketplace.

The next place this fight will play out is Massachusetts, where two competing legalization measures, one libertarian and the other pro-regulation, will likely appear on the ballot next year. The Campaign to Regulate Marijuana Like Alcohol, backed by the Marijuana Policy Project, wants to place excise taxes on marijuana sales and establish a commission to regulate retail sales. Bay State Repeal's libertarian option would legalize marijuana but impose precious little in the way of new taxes or regulations save for banning its sale to those under 21 years old.

The political cleavages are different in the two states: Ohio's measure was offensive to both the left and also to libertarians opposed to corporate welfare. But both Massachusetts and Ohio highlight the cost of cautious or prohibitionist state legislators who fail to take up legalization legislation on their own and instead cede the power to craft these novel legal narcotics markets to activists. Even the pro-regulation measure in Massachusetts, for example, would only tax pot at a maximum 12-percent, far below other legalized states' rates, according to the Boston Globe.

Legalization is now a seeming inevitability, at least outside of the most conservative states. Ohio can probably wait a year to get it right.