Small-bore reform won't cut it: Joseph Stiglitz says it's time to "rewrite the rules" of the U.S. economy

The time is now to lay a foundation for a new kind of economy, argues Nobel Prize-winning economist Joseph Stiglitz 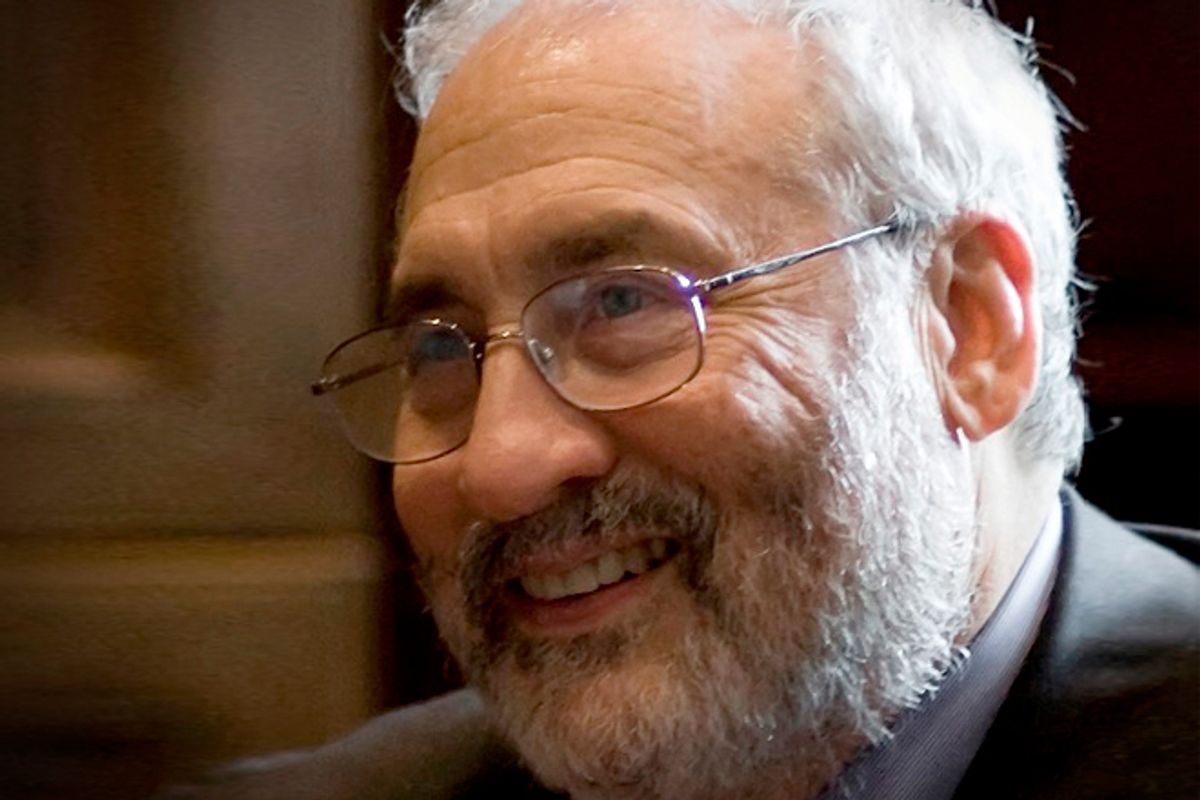 Earlier this year, Hillary Rodham Clinton gave a clear signal to those who’d notice that her second presidential campaign’s economic policies would be what Vox’s Matt Yglesias has called “paleoliberalism.” And while the phrase may be too clever by half, it got the basic thrust of her policies right. Namely, Clinton would drift away from the market-first neoliberalism of her husband or President Obama and champion using government to fix an economy system she’s described as “rigged.”

It’s too early in the campaign to judge whether Clinton is truly moving back toward an unapologetic embrace of a New Deal-era vision of government. But the signs so far are pretty good; even Robert Kuttner, a frequent critic of Democratic timidity, described a speech on the economy she delivered in July as “exemplary.” Still, Clinton has not laid out a retinue of major economic reforms, choosing instead to address issues piece-by-piece.

That’s the safe move from a political standpoint; and it may be more in keeping with Clinton’s temperament. But if you want to get a sense of what that more-sweeping vision might look like, take a look at “Rewriting the Rules of the American Economy: An Agenda for Growth and Shared Prosperity,” the new book from Joseph Stiglitz, the chief economist for the Roosevelt Institute and Nobel Prize winner, based in part on a report that the Institute released to great fanfare earlier this year.

Recently, Salon spoke with Stiglitz over the phone about the book, why he thinks this is such a special time for economic reform, and how he sees his role as an economist within the broader political movement against inequality. Our conversation is below and has been edited for clarity and length.

Why do you think now is the right time for activists and experts and policymakers to push for major changes to our economic system? Why is it better to go big now rather than focus on incremental reform?

I think it’s a good moment because, finally, the accumulation of the failures of the experiments that we describe beginning around 1980 [trickle-down economics] are becoming abundantly clear. And as a result, that is being picked up already by [presidential] political candidates, reflected by the dissatisfaction expressed on parts of the right.

So about that “experiment” — what do we now know about the economy that we didn’t know 30 years ago?

There are a couple of insights. One is about the view of a trade-off, where you could get more equality only at the expense of economic performance. The perspective today is actually that inequality can be very adverse to economic performance. And this view has moved from being the left-wing position to very much a mainstream position. The IMF, for example, is strongly pushing that view.

What’s another insight about the economy that we didn’t know before but know now?

There was once a belief … that there was a natural arc of history; that as economies [grew], they became more equal. A lot of people just assume the economy was going to be like it was in the decades after World War II; a kind of shared prosperity.

Now, we know that that is not inevitable; it really depends on the policies. If you pursue the wrong policies, you wind up with a small group getting all the benefits of economic growth. [John F.] Kennedy would say, “A rising tide lifts all boats.” No one would say that today.

The rising tide no longer lifts everyone, if it ever did?

In the first three years of the so-called recovery, 91 percent [of economic gains] went to the top 1 percent. That is really astounding.

Why do you think that is happening?

I think there are number of reasons, [many of which] have been going on for the previous three decades.

So, we changed the bargaining position of workers through three means: higher unemployment, globalization and, finally, changing the rules of the game with regard to unions. We’re continually weakening unionization and making unions more difficult.

All these are ways in which the rules of the game have disadvantaged workers relative to CEOs and shareholders — and led to this growing inequality.

What rules are there that advantage CEOs and the like at the expense of workers?

Well, there are a whole set of rules and legal bindings. You might also say the interpretations of the law.

One of the most obvious examples is when CEOs are paid with stock options which encourage them to try to get the stock price up. If you have a world in which stock markets are short-sighted, short-term, then whatever they can do to get the stock price up, that’s what they’ll do. So if investors are a little bit short-sighted, and see a cut in wages, they think, oh, the firm is cutting costs, even if, in the long run, it means that they have to train more workers. Loyalty is undermined, productivity is decreased; and if the stock price goes up, the CEO is rewarded, and that’s the end of the story.

A second example of a rule that encourages this is that when you use stock options [as compensation]. People almost pretend as if the CEO pick is like manna from heaven: Nobody pays for it. But what you’re doing is diluting the ownership [value] of other people. I remember, when I was in the White House, how the Council of Economic Advisors argued very strongly that there should be disclosure of the value of [stock] options. And people strongly resisted disclosure. Of course, the reason is clear; they were afraid that if you disclosed what was being given it would lead to resistance to the CEO pay.

And the third example is, unlike Australia, we don’t have a say in pay provision — that is to say, shareholders have no binding say (or even advisory say) in the pay [of CEOs].

How do these seemingly disparate policies add up to “rules of the game,” though?

These are all ways that we’ve rewritten the rules to encourage stock options and short-termism. And there are ways of changing the rules.

For instance, if a major CEO is keeping major stock for 15 years, and you make sure that they couldn’t short-sell it, then you would have a focus on the long-term. You could have shareholder voting with loyalty shares that would give more voice to long-term investors rather than the guys who are in and out all night — the speculators, the high-frequency traders.  There are many things that you could do to encourage the firm to think longer-term. I don’t think it’s ever going to be perfect, but you could change the extremes of short-termism to which America has descended.

And when you talk about increasing the amount of pre-tax income for the 99 percent — alongside raising taxes on the 1 percent, too — is that something you can do by changing the rules of the game, too?

One of the important reasons for writing the book is to emphasize that what’s peculiar about America is that we have one of the highest levels of inequality of market income. And that is the result of the rules of the game; the result of weakening unions, CEO power, corporate governance — the things we’ve been talking about.

It seems like a lot of the problems here are not about policy so much as politics. In other words, we have ideas for combating inequality — it’s just that the political status quo is such that we can’t test them. You spend a good amount of time in the book noting that what’s needed is a broadly conceived political movement, like the kind that defined the Progressive Era and the New Deal. So what I wanted to ask you is, how do you, as an economist, conceive of your role within that larger political project?

You’re absolutely right that the central issue here is trying to get a political approach to make the changes. One aspect of making the changes is convincing people to get engaged, to convince them that there’s an alternative.

In some of my earlier work, I argue that inequality is a matter of choice. What this book does is push that one step further and actually show what kinds of changes one can organize for that will lead to a different economy. So what I see as my role in this is partly to try to articulate that, and hopefully to give some politicians a platform and agenda that they can push for; and to give civil society groups some concrete goals and demands that they can argue for.

And some of this, you see, is going on already. The Fight for $15 [activism] in so many cities around the country — that’s an example of a change that would bring people to something closer to a living wage. But you have to understand that that’s only one of the rules that we have to change; we can’t stop there. We have to think about more comprehensive reform if we want to make a more significant dent in America’s fight against inequality.