Sympathy is for white people: The "60 Minutes" segment that highlights America's startling double standard on addiction 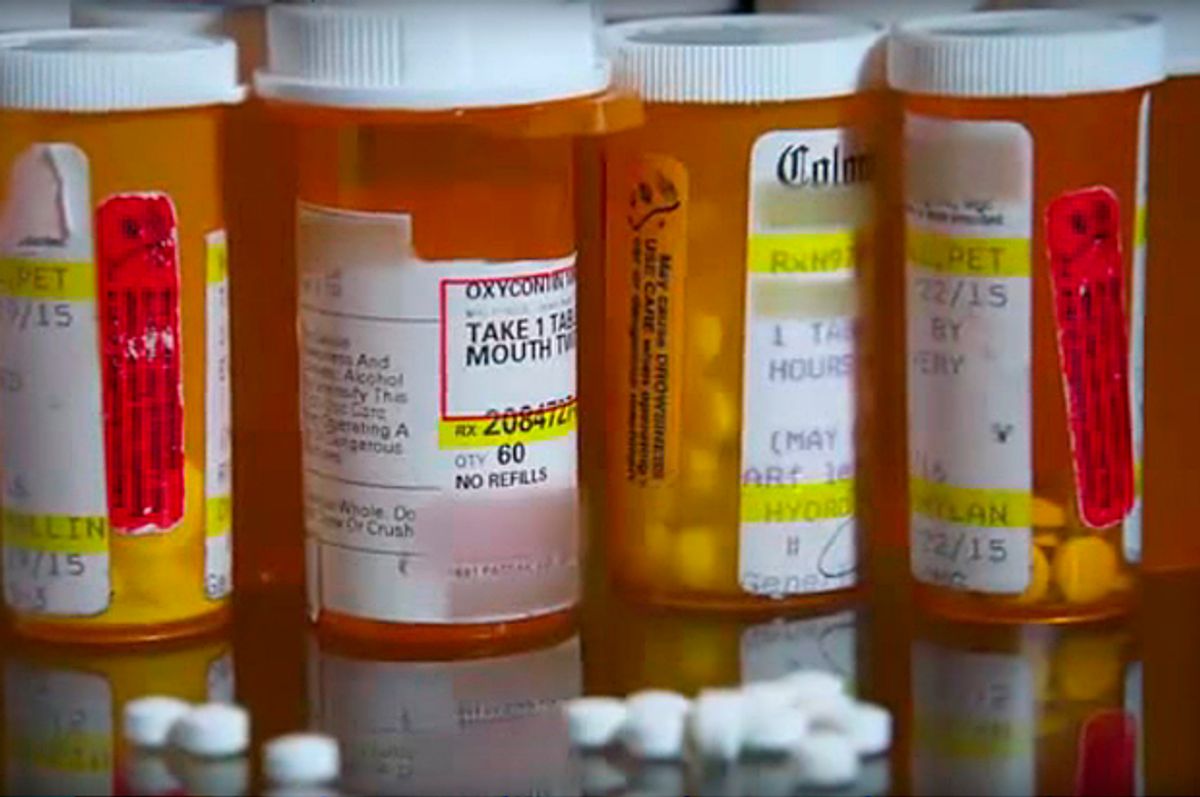 America’s rural and suburban communities are experiencing epidemic levels of heroin use. Estimates suggest that 90 percent of new heroin users during the last decade are white. Sunday evening’s episode of the TV news magazine "60 Minutes" devoted a segment to this problem called “Heroin in the Heartland.”

“Heroin in the Heartland” was an exposé on the human cost of drug use, the families destroyed and the lives lost. It was also an example of how, in the War on Drugs, black and brown people receive hefty prison sentences, while white people are shown, above all else, sympathy. Lady Justice is not blind. Her scales are heavily weighted against people of color, the poor, the working class, the disabled, and the “mentally ill.” To understand why this applies to Sunday's "60 Minutes" report, we first have to take a step back and establish some basics.

The effects of the racial and class disparities at almost every level in America’s “criminal justice” system are cumulative. They begin at the moment of arrest and continue through to sentencing and parole. The sum result of this process is that even while a black man may be President, the United States has more black people under the control of the “criminal justice” system than were held as human property during its slave regime.

(The United States also locks up far more black people per capita than South Africa did during Apartheid.)

The carceral society has effectively removed millions of black men and women from participation in the polity by stripping them of voting rights, denying them the ability to find employment (white felons have a far easier time returning to the workforce), and placing entire communities in a state of civic paralysis, a condition that political scientist Vesla Weaver describes as “custodial citizenship.”

The news media’s coverage of crime is racialized. For example, social scientists have repeatedly shown how America’s corporate news media over-represents the percentage of crime committed by black people and exaggerates how often white people are victims of crime. Meanwhile, entire categories of crime that are almost exclusively committed by white people such as domestic terrorism, mass shootings, financial fraud, treason, and other offenses are grossly underreported.

What's more, violent crime is at record lows in the United States, and what crime does occur is intra-racial -- but you wouldn't know it from watching the news. From Emancipation to the present day, America’s corporate media, politicians, and other opinion leaders have created a menace whose name is “black crime.” There is no equivalent language of “white crime” in America’s dominant political discourse.

This bias is pervasive.

By focusing on White America’s heroin epidemic, "60 Minutes" attempted to subvert the dominant racial narrative. But in fact, “Heroin in the Heartland” actually reinforced the realities of white privilege. Its first few moments were representative of how the segment would struggle to escape this organizing logic.

"You might think of heroin as primarily an inner-city problem. But dealers, connected to Mexican drug cartels, are making huge profits by expanding to new, lucrative markets: suburbs all across the country. It's basic economics. The dealers are going where the money is and they're cultivating a new set of consumers: high school students, college athletes, teachers and professionals.

"Heroin is showing up everywhere -- in places like Columbus, Ohio . The area has long been viewed as so typically Middle American that, for years, many companies have gone there to test new products. We went to the Columbus suburbs to see how heroin is taking hold in the heartland."

This is an example of how colorblind white racism does the day-to-day work of white supremacy through the use of “race neutral” language. In America’s racial lexicon, “inner-city” is code for “black and poor.” “Teachers,” “professionals,” “the heartland,” and “Middle American” are the unqualified (and thus assumed) mentions of whiteness.

(The power of white racial erasure is omnipresent in “Heroin in the Heartland.” As such, the word “white” does not appear once in the segment even though it is focused entirely focused on drug use by white people.)

Such a trend would continue throughout the segment, in which white people -- in particular young white women -- were featured as examples of drug addicts who don’t look like drug addicts. Whitaker even described one of these imperiled young white women, who is caught up in the nation’s newest racially tinged and gendered moral panic, as "young and fresh," as "the girl next door."

In the public discourse of “post-racial” America, the diminished status of the Other is present even while often not explicitly signaled to. The normality of “good,” “normal” white people who just “made a mistake” is a given, even if not explicitly stated.

An accurate context is essential for a sophisticated understanding of the social and political world. The "60 Minutes" story on White America’s heroin epidemic was, like many other discussions of race in the United States, devoid of that nuance and context.

In the United States, rates of drug use are comparable across racial groups. But, black and brown people are incarcerated at much higher rates for these offenses than whites. And as was seen in New York’s “stop and frisk” program, while white people may have a higher chance of having drugs on their person, people of color are more likely to be harassed and arrested. White drug users are also much more likely to be put in diversionary or alternate treatment programs as compared to African-Americans. Blacks get prison and jail; whites receive a second chance and other types of assistance.

The struggle for justice along the color line is not limited to fighting segregation, wealth inequality, stopping police thuggery and legal murder, protecting voting rights, or ending job discrimination against black and brown Americans. It is also a story about expanding the boundaries and limits of empathy and respect.

"60 Minutes’" depiction of white heroin users was sympathetic and humanizing:

Bill Whitaker: I'm sure there are some who would be watching this and would say, "Heroin addicts are junkies and they brought this on themselves, so why should we care?"

Tracy Morrison: Because we don't throw diabetics who sit on the couch eating Bon Bons and smoke and they weigh 300 pounds in prison. We don't belittle them and there's not a big stigma; we don't do that to people that chain smoke and develop lung cancer. It's a chronic relapsing brain disease, period, amen, end of story and we need to accept it-- even if it makes people uncomfortable. And if people don't like that, I'm sorry.

And yet, given the complexities of America’s racist and classist War on Drugs, such sentiments are likely uncommon among the white public towards black and brown Americans in the same situations.

In the-post civil rights era, it bears reminding that white racism and white supremacy can take many forms. They can be overt and ugly. Likewise, such sentiments can appear in the form of “dog whistles” or “coded speech.” And yes, white racism and white supremacy can be signaled to by ostensibly “race neutral” comments that are reminders of how a sense of decency and human empathy is neither consistent nor fair along the color line—especially when drugs and crime are the topics of discussion.