Ben Carson's bizarro-world pyramid madness: This is why evangelicals adore him, and everyone else will find him nuts

Ben Carson is beloved by evangelical voters, but he probably won't appeal to others. He may not even want to 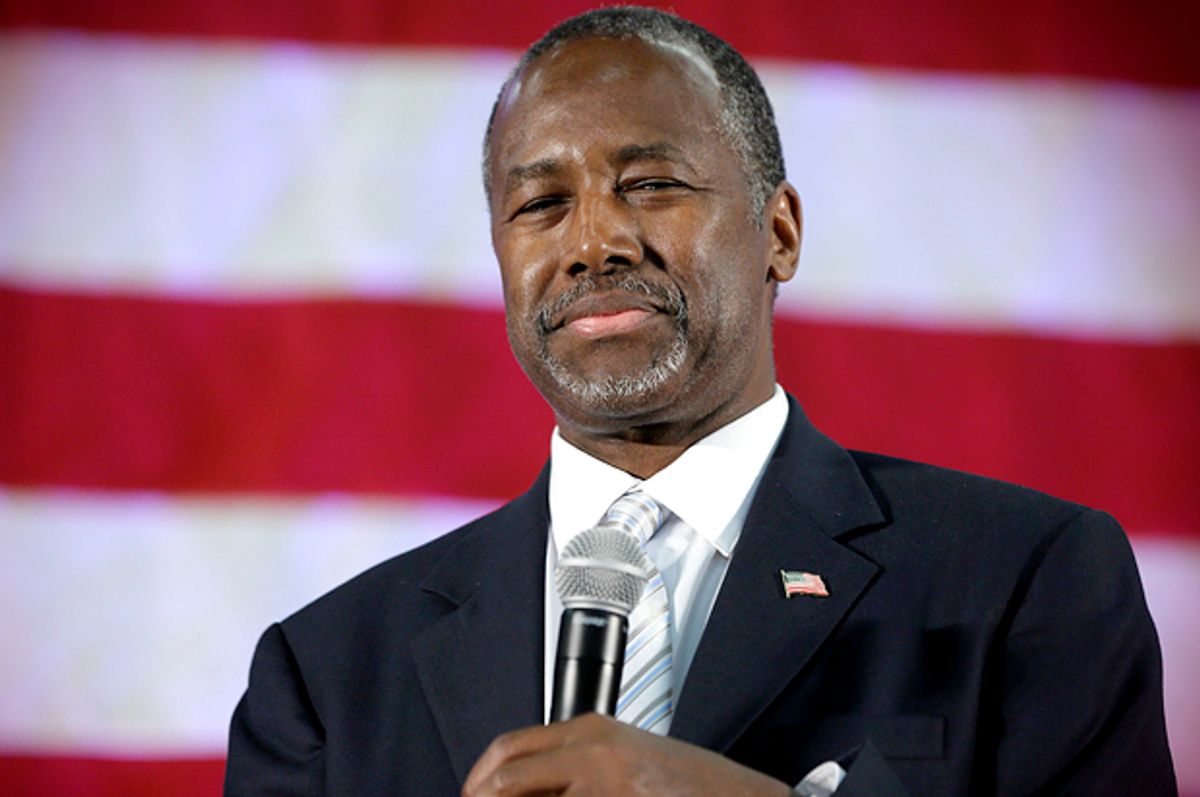 Ben Carson has snuck past Donald Trump in some polls, making the race between the two front-runners for the Republican nomination a neck-in-neck contest, with each pulling almost a quarter of potential Republican primary voters.

Carson's surge means, inevitably, a new focus not just on the man but what makes him so popular -- especially since Carson is firmly ensconced in the truly outrageous fundamentalist camp of conservatism, the kind that goes beyond just praising Jesus every five seconds to indulging all manner of conspiracy theories and wild ideas.

He is, basically, this cycle's version of Michele Bachmann, except instead of maxing out at one-sixth of the Republican electorate, like she did in the summer before the primaries, he's running at the head of the pack---and much closer to the day when voters start stepping into the booth.

How is he pulling off what Bachmann couldn't? Rosie Gray of Buzzfeed has a piece looking at this question titled, "Ben Carson’s Winning Everyone Over By Focusing On Evangelicals." The headline is misleading. The "everyone" is justified by the fact that Carson is currently doing well in some polls that pit him against Hillary Clinton, but that doesn't really mean that much this far out from a general election, when most potential voters aren't paying enough attention to realize that Carson, despite his soft-spokenness, is a science-denying lunatic who thinks that the Egyptians didn't build the pyramids.

No, the real story here is how he's affecting Republican primary voters that are paying attention, and on that front, he's doing well enough to lead in the polls. "Unlike faith-focused candidates of years past, though, he has proven himself to not be a niche candidate," Gray writes. "He’s now leading the Republican primary race, according to the most recent NBC/Wall Street Journal poll — not only that, 50 percent of Republican voters polled named Carson as either a first or second choice."

It is true that he's doing well amongst Republican primary voters, no doubt. But that doesn't mean he's not a niche candidate. At this point, there is no real reason to believe that Carson has built a base of support outside of the evangelical community. It's important to remember that white evangelicals make up a full half of Republican primary voters. Which means that all Carson has to do in order to surge ahead in the polls in such a contested race is to position himself as the pick for the Bible-thumpers. He's better at it than Bachmann was---and his presence doesn't create anxiety about women being in the world instead of the home---but in no way does that mean that he's broadened his appeal beyond that.

The evidence Gray brings to bear shows not that Carson has transcended his niche status, but that he's just conquered this particular niche. As she notes, he is fond of using "us-versus-them rhetoric based around religious differences." As she notes, "Evangelicals don’t necessarily vote as a bloc," but Carson's numbers suggest he's the candidate who is best-positioned to get them to do just that.

One reason he's so good at it, however, is because Carson's probably not trying to win over any other voter bloc. Nearly all the other candidates know they have to get evangelicals behind them---even Donald Trump does a lot of transparent posturing around the Bible he supposedly loves to read---but they also know they have to do so while appealing to other constituencies.

Carson isn't trying to hustle support from non-evangelicals. He can let his freak flag fly, trotting out every weird myth and anti-science position beloved by the Christian right, and doesn't seem particularly worried if it makes anyone outside of his evangelical bubble think he's a weirdo. This was once again demonstrated this week when Carson reiterated his support on CBS for the idea that Joseph---yes, the one from the Bible---build the pyramids of Egypt as grain silos.

There's long been a number of conspiracy theories floating around positing that someone not-Egyptian---aliens, Biblical figures, what have you---built the pyramids. These conspiracy theories are nakedly racist, rooted quite clearly in an unwillingness to believe that Egyptians are capable of such a feat. But Carson's take on it shows exactly why he's gaining traction with fundamentalists, who want to believe the Bible is literally true.

The Old Testament is built, in large part, on this ludicrous notion that Biblical patriarchs were instrumental in Egyptian history---that Joseph was literally the right hand man of the pharaoh. The problem is that's all nonsense and no actual historical evidence for it. But rather than accept that Joseph is a myth, fundamentalists have concocted all sorts of elaborate theories, including this grain silo nonsense, to justify believing that the man existed and was a power player in Egyptian politics.

The particulars aren't the issue here. The takeaway is that Carson is telling fundamentalists what they want to hear: Their Bible is literally true, their version of history is better than the one historians have written, and that the only people capable of great acts are the ones that they consider spiritual ancestors, and not worshippers of pagan gods, like the ancient Egyptians. It's about centering the Bible in Egyptian history and waving away the actual faith of the Egyptians that led to those pyramids. Carson's narcissism, in a lot of ways, resembles the narcissism at the heart of fundamentalist Christianity. No wonder they love him.

And the love of fundamentalists is probably all that Carson wants. As many people, most notably Jonathan Chait of New York, have argued, Carson is probably not really running for president, but sees "running for president" as an "opportunity to build his brand." The evidence for this is damning: Carson has taken time off his campaign to do a book tour. He barely bothers to put together policy ideas. Most interestingly, Carson's campaign spending more closely resembles the spending of a direct mail operation rather than a political campaign---69 percent of his money is spent on more fund-raising. These kinds of behaviors put him more in the televangelist/conservative grifter camp than the actual politician camp.

The objection to this, of course, is that there's a lot of ways, beyond the headache of a fake presidential campaign, to build your brand as a Christian "personality" to sell books and do mail order scams with. That is true, of course. But, as Mike Huckabee learned long ago, there's just something special about being a "presidential candidate" when trying to grift the gullible Christian crowd, something that just being a pastor pounding the pulpit will never provide.

And Carson's story of the pyramids, I think, gives us a clue to what that might be. It's clear that it's not enough, for evangelicals, to have their subculture and to be happy about it. There is a clear need to believe that their worldview and ideas are at the very center of history itself. Just as they need to believe that a Biblical figure like Joseph actually ran the ancient Egyptian government, they need to see themselves at the center of American culture, the true definers of it and not just a fringe subculture. Prominent political figures who are in national debates and getting interviewed on TV scratches that itch. And Carson gives them that without having to engage in the coded language that someone like George W. Bush used.

Ben Carson is one of theirs, unvarnished and unapologetic, on the center stage. He is their mythical Joseph---an outsider of humble origins who is destined for great leadership---for now, anyway. He is going to cash in on that as long as he can.