"Education is good": "Crippled America" and the world according to Trump

"Crippled America" is a hilarious, head-first dive into the shallow depths of Donald Trump's soul 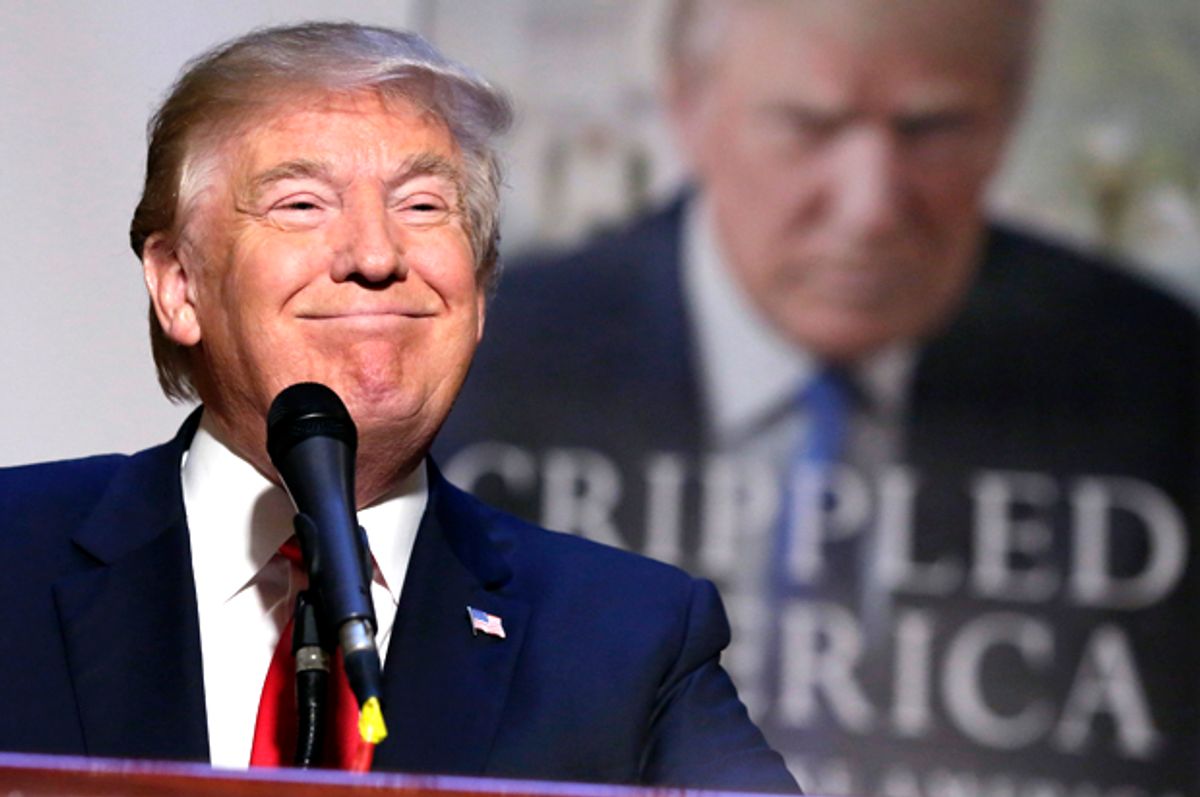 While reading Donald Trump’s new book, "Crippled America," I found myself constantly wondering if Trump himself actually wrote it. The 200-plus pages of this bizarre tome are a spot-on re-creation of Trump’s speaking style – erratic, meandering and constantly derailed by self-aggrandizing asides that don’t really have anything to do with the topic at hand. If "Crippled America" is indeed the work of Trump’s own hand (or, more likely, dictation supplemented with copied-and-pasted snippets of transcript from past speeches), that wouldn’t surprise me. But if this perfect crystallization of the Trump style is the work of a ghostwriter, then bravo, sir or madam: Whatever Trump paid you for this, it’s not enough.

Whoever is responsible for the authorship, it doesn’t change the fact that "Crippled America" is an incomprehensible mess. If you’ve seen Trump speak or campaign for any length of time, then the themes laid out in this book won’t be surprising: America has become a loser country, and Donald Trump will make it great again because Donald Trump is the acme of human excellence, a very wealthy and intelligent and wealthy and smart and wealthy and brilliant and wealthy man who does nothing but build great things and make great deals. Much of "Crippled America" is an advertisement for Trump properties – the conclusion mentions, in order, Trump Tower, Trump Palace, Trump World Seoul, Trump Tower (Manila), Trump Ocean Club, and Trump Golf Links at Ferry Point. The back of the book features 11 photos of different Trump properties, compared to seven photos of Trump’s family, and one of Ronald Reagan (“a great guy,” per the caption).

The book is an exhaustive exploration of the manic, uncontrollable pride Donald Trump feels for being himself. But if you’re looking for any sort of explanation for precisely how Trump will Make America Great Again, well, friends, I’m sad to say you’ll be disappointed. There is a chapter titled “Winning Again,” which you’d think might lay out part of that strategy, but instead offers this:

And Donald Trump creates jobs for legal immigrants and all Americans.

Rather than provide a coherent statement of ideology, Trump crafts hilariously simplified statements of principle that animate the Trump worldview. Foreign policy? “My approach to foreign policy is built on a strong foundation: Operate from strength.” What about jurisprudence? “If you have laws that you don’t enforce, then you don’t have laws. This leads to lawlessness.” And, my personal favorite, education: “There is one thing I know that even the professional politicians will support – education is good.” For the culturally literate among you, “education is good” might have a familiar ring to it.

Trump’s stream-of-consciousness rambling also leads him to contradict himself at several points and flatly undermine the point he’s trying to make. There’s an entire chapter on the crimes and malfeasance of the media in which Trump calls reporters who report inaccurate things about him “horrible human beings.” A few pages later, however, he writes, “I don’t mind criticism. People call me thin-skinned, but I have thick skin.” A few pages after that, he spends 10 paragraphs attacking conservative radio host Hugh Hewitt for asking him “gotcha, gotcha, gotcha” questions that revealed Trump’s ignorance of Middle Eastern politics. (Trump dismisses the questions as irrelevant but also tries to reassure his readers: “Let me tell you something: When I need to know something, I know it.”)

The contradictions are everywhere. “I use the media the way the media uses me – to attract attention,” he writes. A few pages later he huffily boasts that he doesn’t crave media attention. “One of the problems the political media has with me is that I’m not afraid of them. Others run around practically begging for attention. I don’t.” Early on in the book Trump notes that critics say he doesn’t “put out enough specifics” and he acknowledges this is true: “There’s a good reason for this, and it fits perfectly with my overall philosophy of leadership.” Later on in the book he again notes that he’s “criticized for not issuing elaborate, detailed policy statements,” but this time he denies it’s true: “What good are detailed plans if your country doesn’t have the credibility to carry them out— but I issue them anyway.”

The uncontested truth is that Trump does not deal in policy specifics. The healthcare reform plan he lays out is, quite literally, to cram smart people into a room and “not unlock the door until they’ve agreed on the steps we need to take.” The Trump budgeting plan is “to find the best people, including experts in various fields and economists, as well as congressional leaders to provide perspective and determine which programs are working and should be kept or expanded, which programs should be cut, and what new programs might be added to deal with the changing world.” The Trump plan for re-greatening America is to have some other people figure something out.

When he does try to deal with specifics, he frequently gets things hilariously wrong. “We’ve tried a lot of different solutions” for curbing undocumented immigration, he writes, “and the result is that now illegal immigration is worse than ever.” (Not even close to being true.) “How do you pay for this wonderful plan?” he asks of his own tax plan. “The good news is that it is revenue neutral.” (Wrong in literally every way it can be wrong.) “Even Nancy Pelosi, the Democratic House Majority Leader at the time, conceded that most supporters of [Obamacare] had not actually read it,” he wrote, wrongly describing what Pelosi said and misstating the office she held (Pelosi was speaker at the time; she’s never been the House majority leader).

The only consistently reliable theme to be found in "Crippled America" is the relentless self-promotion that animates everything Donald Trump does. His laughably shallow attempts at policymaking serve as platforms for assaulting you with descriptions of his negotiating skills and business acumen. Even his appeals to patriotism end up turning into stories about Donald Trump. “I’ll tell you how proud I am to be an American,” he writes, explaining that he flew a gigantic flag in front of his Florida home (“128 rooms,” we’re informed needlessly), and then sued the city of Palm Beach for $25 million when they forced him to take it down for violating city codes. The incident had nothing to do with patriotism and everything to do with Trump provoking and filing a nuisance lawsuit to bully the city into waiving some fines he’d incurred while developing an entirely different property. But it provided an excuse for Donald Trump to talk about Donald Trump, which, in the end, is all that matters.