Enough about Kim Kardashian's sex tape: How hard does a woman have to work to prove she's earned her success? 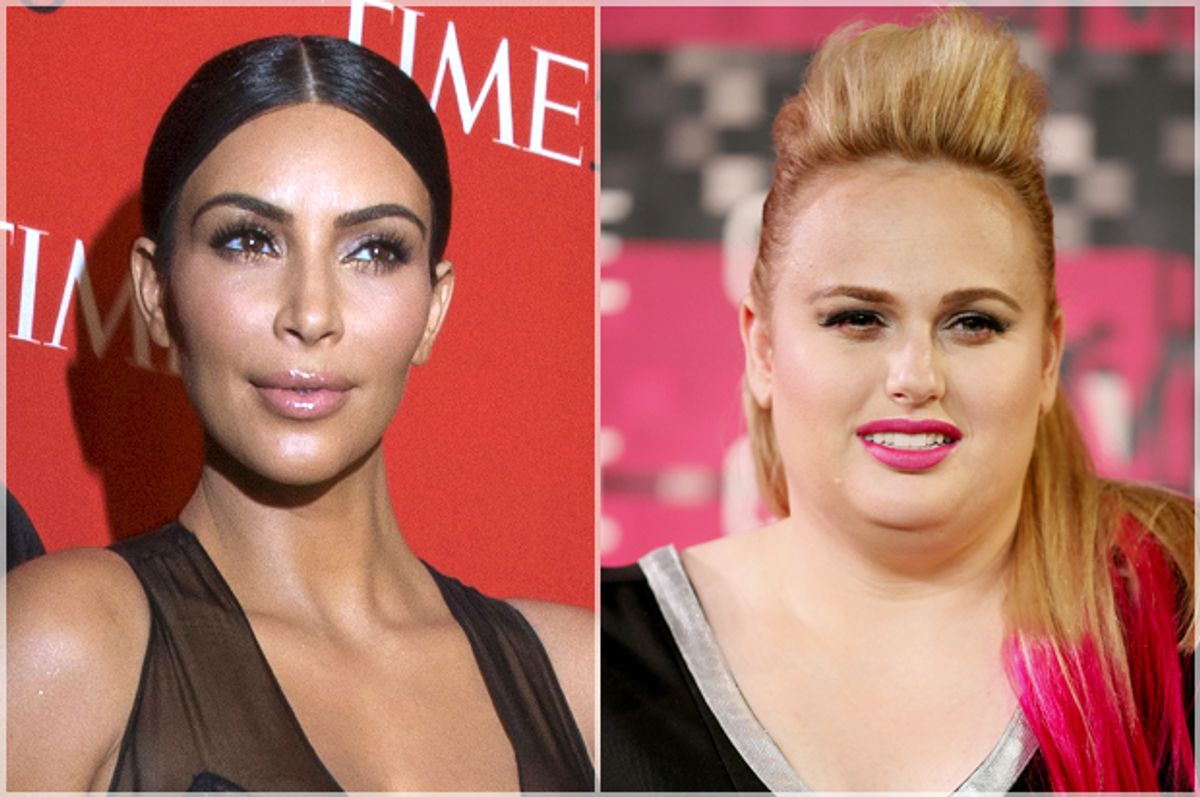 In case you need a math lesson: Kim Kardashian’s sex tape came out in 2007. It’s now 2015. That’s an eight-year time span. So if you are still harping on the fact that Kim, and by extension, her entire family, are famous “because” of her sex tape, I’d counter that you don’t understand how the entertainment industry works. It’s ludicrous to suggest that they could simply coast on that initial notoriety by “doing nothing” and maintain their stranglehold on American pop culture.

So whenever I hear someone suggesting as much, I immediately dismiss them in my mind as ignorant, which is exactly what I did with Rebel Wilson’s recent comments about why she refused to share the VMA stage with Kendall and Kylie Jenner. According to People, Wilson told an Australian radio station, “What they stand for is totally against what I stand for. They seem a bit superficial and their careers aren't really based on talent.”

As if that weren’t enough, Wilson went on to say, “I know they're super popular, but I'm all about personality and working hard to get to where I am. I mean how Kim Kardashian got famous from the sex tape and I just went to acting school and worked really hard.”

That’s where Wilson really dug herself into a hole. First of all, the Kardashians and Jenners are also “all about personality” and working hard. They bank on their personalities and the minutiae of their lives to fuel purchases of games, apps and other branded merchandise, to get magazine covers and ratings and spinoff shows, and simply to remain famous. I have a feeling that in ten years we’ll still be talking about the Kardashians and Jenners; can the same be said for Wilson?

Wilson’s comments were different from Amy Schumer’s on "Saturday Night Live," where it was clear, at least to me, that she wasn’t mocking the Kardashians per se so much as our culture’s priorities and beauty standards. Schumer lamented that young girls don’t have Malala posters on their walls, but do look up to the Kardashians, who, in her words, are “a whole family who take the faces they were born with as a light suggestion.” See the difference? Schumer was making fun of them, and making fun of us. Wilson was just being rude and divisive.

This summer, Elle ran a four part series by Sally Holmes called “I Lived Like Kim Kardashian For a Week,” in which Holmes tackled emulating the reality star in the realms of fashion, beauty, body and life. While of course the actual Kim’s life is surely much different from Holmes’ mini version of it, I encourage Wilson and anyone else who wants a peek into what it takes to look like Kim to read it to learn some of the tricks of the trade and that “working hard” takes on new meaning when it involves daily activities we might take for granted, like selfies.

Holmes wrote of the life phase of her experiment, “[A]nother thing I had trouble with is getting a photo that wasn't soclose to my face. And one reason you don't want to be SOCLOSE to my face is that it's hard to make a good Kim Face. I discovered this when I stood in my bathroom trying to make a casual sexy face. It was worse, much worse, when I had to make that face in front of a real camera. How many tries does it take to nail the perfect a passable Kim Face? A LOT.” Being famous for “being famous” doesn’t “just happen.” It takes effort.

As I said in my review of the recent biography of Kim Kardashian, I believe there’s nothing that can truly cause a scandal for Kim, and stories like this only make the Kardashians more famous and make Wilson (or any other celebrity who’s badmouthing them on the same basis) look petty.

I get that criticizing the Kardashians is an easy shortcut, a way of lamenting the difference between “reality TV” and reality. As Taylor Ferber, who has conflicted feelings on the topic, wrote at VH1, “It’s irritating that someone like Rebel can work their ass off with pride and diligence for years, chasing after their dream, when you have others out there like Kylie and Kendall, who had their fame handed to them on the silver platter that was their sister’s hooha.”

Critics see them as consumerist nepotism run amok. But here’s the thing: the Kardashians aren’t famous simply because they shove themselves in our faces at every opportunity. They’re famous because we respond. We watch, download, buy, read, gossip. We keep up, whether it’s because we love to hate them or simply can’t look away. And they work hard to keep our interest.

What Wilson is implying, though, is that she was somehow taking a stand for the underdog, against vapidity and for substance. Pardon my French, but fuck you for knocking what I and millions of other people find entertaining. That’s a false distinction and one that only ever serves to highlight the snobbery of the person trying to appear “high brow.” It’s perfectly fine if Wilson wanted to grace the VMA stage by herself; that I get. But to go out of her way to slam the Kardashians seems like a desperate ploy to get press and keep her own name in the news; pot/kettle, Rebel?

It’s not a good look to knock other women simply because you aren’t a fan of what they do. Sorry not sorry, but I am smart enough to know that sometimes almost all of us want a little superficiality in our lives. Now if you’ll excuse me, I have some "Dash Dolls" episodes to catch up on.