"Go home or we will gas you until you die": The horrifying orders from an Israeli border guard to Palestinians

The problem with occupation is the toxic mix of fear, militaristic nationalism and racism it produces 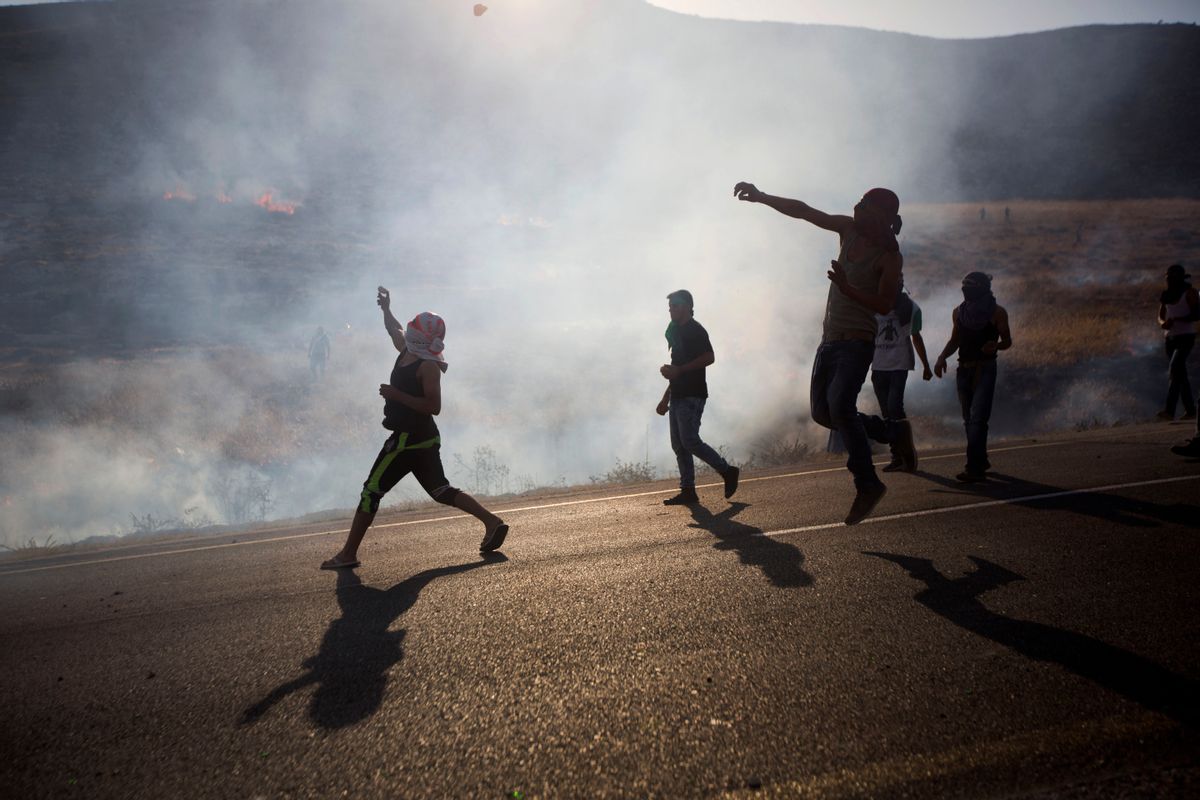 The line between dreams and nightmares is thin and porous. Such is the case with the creation of the state of Israel. What for millions of Jews was a dream come true, for Palestinians was a nightmare, and an apocalyptic one at that.

Around three-quarters of a million Palestinians were forced out or fled their homes, many with suitcases and keys in hand, perhaps naively believing they would be allowed to come back after the cessation of fighting. These Palestinian families instead became, over time, the world’s oldest unsettled refugee population.

That is why the period of time around the creation of Israel is known in Arabic as the Nakba, or the Catastrophe, a fact I never learned from the glowing heroic origin stories about the miracle nation that was, after all, chosen by God.

But how far we have come. Read the front page of any Israeli newspaper today and it’s clear that very thin line has dissolved – one people’s dream has now become a full-on nightmare for both.

That it has come to this – my colleagues on the ground report the desperation is worse than the second intifada and perhaps worse than at any time since 1948 – was predicted by many.  Though the horror of the Holocaust happened on European soil and was committed by Europeans, the world, through a UN vote, chose to create a new Jewish state in an entirely different continent where indigenous Palestinians had lived for generations. Historic Palestine was not, it turned out, a land with no people.

And even then, rather than building a pluralistic democracy or a binational state, as people like Martin Buber and Hannah Arendt once advocated, early Zionists built a Jewish state with discrimination built into its DNA, granting special rights and privileges to Jews but not to the Palestinians who called the land home.

To make matters worse, in what can only be described as a twisted form of idolatry, Israeli entitlement to virtually all the land from the river to the sea has led to nearly 50 years of depriving millions of Palestinians of their basic civil and political rights. All because of a belief held by settlers and high-ranking officials alike that God gave Jews this land. All of it.

The inevitable result of all this for Israelis is what Netanyahu acknowledged just days ago (echoing Ze’ev Jabotinsky, the intellectual father of Likud): “I’m asked if we will forever live by the sword – yes.”

But living forever by the sword has its price. Not just for Palestinians, but also for each generation of Jewish Israelis. They too pay, with the ongoing reality that Palestinians will indeed rise up, and with military service and even Israeli citizenship that requires suppressing parts of themselves.

Of the many nightmarish videos to come across my desk in the last few weeks – including one of an Israeli border police officer deliberately running over a young Palestinian with a jeep, and then another pepper-spraying at close range the eyes of journalists and several medics trying to help – one of the worst speaks volumes about the toxic mix of fear, militaristic nationalism and racism that produces the near total loss of humanity of the occupier.

It features a scene almost entirely cloaked in blackness, but it is accompanied by the unnerving sound of an Israeli border policeman barking orders in Arabic over loudspeakers.

“People of Aida refugee camp we are the occupation army. You throw stones and we will hit you with gas until you all die. The children, the youth, the old people, you will all die, we won’t leave any of you alive. And we have arrested one of you, he is with us now. We took him from his home and we will slaughter and kill him while you are watching if you keep throwing stones. Go home or we will gas you until you die. Your families, your children, everyone we will kill you. Listen to me, all of you go home, it’s better for you.”

It’s impossible to know if the policeman realizes the significance of what he is saying. It is as though he is a character sprung fully formed from the words of the great Israeli intellectual and Orthodox Jew Yehoshua Leibowitz who provocatively, and prophetically, coined the term "Judeo-Nazis" to describe the behavior of settlers and Israeli occupation forces. That the policeman is yelling at families in a refugee camp who lost their homes when Israel was created simply compounds the horror.

Aware of the shocking optics of this now widely distributed tape, the Israeli police have suspended the officer. But, like cases too numerous to count, some of which prompted Amnesty International to recently suggest Israel had “thrown out the rulebook,” the policeman will almost surely not be punished beyond the bare minimum.

But for those who have been paying attention, there is little surprise at this chilling demonstration of how virtually any person can adapt, even if it causes permanent damage to self and others, to the dehumanization required to implement a brutal, illegal, and immoral occupation. The evidence is everywhere, and both Palestinians and a small number of brave Jewish Israelis have been trying to get help from the rest of the world for what seems several lifetimes.

But the world has not listened. Well, not the leaders who have the power to stop this, and not the United States whose virtually unconditional military and diplomatic aid makes it more responsible for this horror than any other single country in the world, save Israel itself.

Whether you care most deeply about right or wrong, including the lessons about justice we learned from Judaism, or only want to discuss pragmatic solutions, the answer is still the same. On one piece of land, there can be no such thing as a dream for one people that is simultaneously a nightmare for the other. As these last weeks have reminded us, we create a future together, or we don’t create a future at all.

Cecilie Surasky is the deputy director of Jewish Voice for Peace